The origin of comedian Charlie Chuck 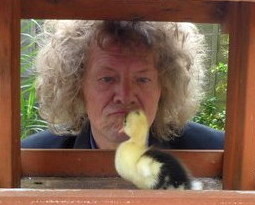 I was chatting to absurdist comedian Charlie Chuck last night. Or, rather, to the real person who performs as Charlie Chuck – Dave Kear. He told me he had been researching his family tree.

“I’ve traced it back,” he told me. “Me family tree. It went back to eleven-something. And the reason it went back to eleven-something was that one o’ the Kears… One o’ me nephews kept the archives in a place called Bream. His name were Bernard Kear and I went down to Bream, where all me family were from – it’s agin Blakeney in the Forest o’ Dean in Gloucestershire. Me family are from Bream in the Forest o’ Dean…

“I went down to Bream, I went into the church wi’ me sister in search o’ me family tree in the Forest o’ Dean an’ this woman said to me: There’s a chap over there – David Kear – an’ he’ll tell you about yer family tree.

“So I actually met another David Kear and he were the same age as me, which were incredible.”

“So you had preachers on both sides of the family?” I asked.

“And your dad made lots of money?” I asked.

“He did alright on Blakeney,” said Dave.

There was a pause.

“He lost it on others,” Dave confirmed.

There was another pause.

“The thing about that…” Dave eventually continued. “I’ll never forget this, but there were a horse in another race called The Elk wi’ Lester Piggott on it. And The Elk beat Blakeney in a photo finish. But Geoff Lewis were told not to hit Blakeney with the whip. Only hands an’ heels. And it went on to win the Derby.”

“With Geoff Lewis riding him?” I asked.