In yesterday’s blog, I mentioned that comedians often have another ‘day job’.

Around seven years ago, Bob Slayer was managing Japanese rock group Electric Eel Shock when they made a Christmas video in which he appeared as Father Christmas. It was posted on YouTube.

Now Bob has become a real Santa Claus. He started the job yesterday in a grotto under a giant Christmas tree at Whiteley’s department store in London’s Queensway and he will be donning his red-and-white robes there throughout December. 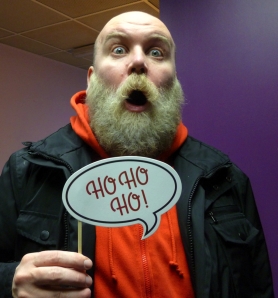 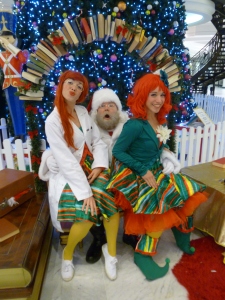 I talked to him last night after he finished his Ho Ho Ho duties. He told me he was going to have to think up some more Christmas stories, because some children had come back a second time on this his first day in the role.

“I’d been telling them how reindeer fly and how they have to go to Tromsø in Norway,” said Bob, “and I could see some of the parents looking at me thinking I don’t know this story; this isn’t a real Santa, so I told the children You see, mummies and daddies don’t know about reindeer.”

And that’s not all.

Tonight, at the Chortle Comedy Book Festival, Bob launches a children’s book he wrote, with illustrations by Rich Rose of comedy duo Ellis & Rose (last referred-to in this blog yesterday a propos their Jimmy Savile: The Punch & Judy Show).

“Remind me what the book is called?” I asked.

He financed it by crowdfunding and reached 169% of his target. The title was originally Calpol Is Evil but he changed it – allegedly after he received an alleged letter from solicitors representing the manufacturers of Calpol. Never forget that Bob Slayer won a much-coveted Malcolm Hardee Cunning Stunt Award in 2011 for his ‘Cockgate’ stunt at the Edinburgh Fringe.

“What’s the premise of The Happy Drunk?” I asked.

“It’s a children’s book for adults. It’s for Big Kids.”

“I don’t know,” replied Bob. “I think they would, although whether their parents would want them to read it… I’d say it should have a PG rating.

“Actually, I should have put that on the cover!” he laughed. “I’ve only printed 50 so far – as a proof to check they’re OK – so I think I might put PG Rated on future covers.”

“Are drunks happy?” I asked.

“Drunks in comedy clubs,” explained Bob, “get a bad name due to the alcopop drunks that the Jongleurs and Highlight comedy chains get in, whereas the sort of people I like doing gigs to are genuinely happy drunks: people who know what they’re drinking.

“When I do gigs in breweries, they’re drinking nice drink. They’re lively, but they don’t get out of hand; they’re good audiences. They’re people who are in for their drink but also in for their comedy. In the comedy club chains, you get big groups of people and some of them do want to see comedy, but others had wanted to go to the cinema or go bowling; they’re not all committed to watching comedy.

“I’m going to print 1,000 copies of The Happy Drunk initially. Rich Rose is having 300, I’ll put some online and sell the rest at gigs. Writing it was a stopgap, because it’s taking me longer to write my How To Out-Drink Australia book than I thought it would. It’s taking longer to edit.” 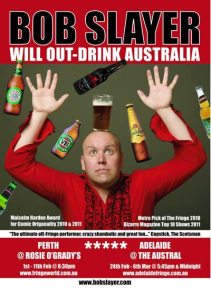 Turning a tour into a book is complicated

“You have a problem with people’s perception of you,” I said. “People think you’re always going to be the OTT Edinburgh Fringe Bob Slayer character.”

“Well,” said Bob, “you have to respond to the audience that’s in front of you. I like to think that I can mirror whatever audience is there. If you put me in a golf club, then I’m not going to end up naked – well, unless that’s what they want. There have been occasions when it’s gone out of control and perhaps I have gone the wrong way, but they’re one-off incidents like in Norway, where I got banned from that theatre.

“Ironically,” I said, “you got a Scottish licence to run your own bar at Bob’s Bookshop during the Edinburgh Fringe. Are you going to do other comedy club bars?”

“Well,” explained Bob, “The reason I could be Father Christmas here was because I had a mostly-free December. And that was because I was going to do a pop-up comedy venue and bar in London – like Bob’s Bookshop in Edinburgh. I looked at a couple of places in Hackney and round East London, but I just ran out of time to get the licensing sorted. So I had kept December free and, when the pop-up club didn’t happen, I put a few club gigs into my diary then this Father Christmas offer came along.”

“So you will be doing other pop-up comedy venues and bars?” I asked.

“I’m working with a new brewery – BrewDog who are Aberdeen-based. They’re the fastest-growing food and drink company in the UK in the last three years. A really interesting independent brewer. They’re funding themselves by crowdfunding: you can invest in BrewDog. The moment they heard about Cockgate at the Edinburgh Fringe, they said We want to work with you.”

“I’m trying to be quiet in January to finish writing my Australian book. I’ve got to get the book done for the next Edinburgh Fringe.”

Bob Slayer “trying to be quiet”?

This does not compute.

At the University of Kent, you can study Stand-Up Comedy. My natural tendency would be to think this is a right load of old wank if it were not for the fact they seem to have produced some rather good rising comedy performers.

There is (in alphabetical order) Tiernan Douieb, Jimmy McGhie, The Noise Next Door and Pappy’s.

And then, out of alphabetical order, there is elfin Laura Lexx. I call her ‘elfin’ because she actually did for a period literally work as an elf in Lapland as part of the Father Christmas industry. I have seen the photos. She is low on height but high on energy. Which is just as well – not just for elfing around in Lapland.

All the way through July, Laura is promoting a month of London previews for other people’s Edinburgh Fringe shows at the Glassblower in Soho, with a line-up which includes Bridget Christie, Phil Nichol and Paul Sinha.

Then she takes off her promoter hat and she’s off to Edinburgh for the Fringe where she’s in both the Comedy and the Theatre sections – performing, producing, writing and directing.

She’s performing and directing the cast in her own straight play Ink (about the 7/7 London terrorist bombings and the media) at the Kiwi Bar.

And she has also done the very neat trick of spotting a new way to finance Edinburgh Fringe shows via wedidthis.org where people who want to support the Arts in a positive way can donate money to the month’s chosen projects. If you reach your target within the month, you get the money donated. If you don’t reach your target, the promised donations made so far are not collected.

At the time of writing this blog, she has another fortnight to raise £175 to cover some of her Edinburgh costs. The donations page is here.

I wonder if anyone would fork out money to cover my modest and artistically-vital publicity costs for Malcolm Hardee Week at the Fringe.

Or maybe I should get work after the Fringe as a Father Christmas clone in Lapland. I would need a wig, I could grow the beard, but I would need no padding.