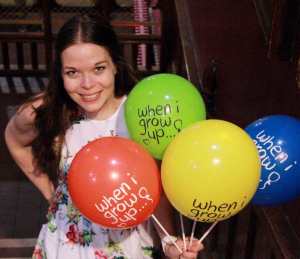 Juliette has always taken an interest in aerial transportation

This morning – early evening to her – we talked via Skype

“We have an end-of-Festival party this evening,” she told me. “It’s a Tarantino-themed fancy dress party. I have two costumes and I can’t decide, so I’m going to go in a yellow jumpsuit in Kill Bill style AND as Mia Wallace from Pulp Fiction with the black bob haircut.

Not to be confused with Juliette Burton

“Sounds like a fully-formed Edinburgh Fringe show,” I said.

“A few days ago, you blogged about the lovely Lili La Scala in London,” Juliette said. “And the other day in Melbourne Sam Wills (Lili’s husband) phoned me up and asked Do you want to take part in a Jaffle-shoot contest – Do you know what that is?

A jaffle – as parachuted-in to comedians in Melbourne.

“Well,” explained Juliette, “jaffles are toasties – toasted sandwiches. Two slices of bread with cheese in the middle and you press them in a sandwich toaster. Over here they call them jaffles and it’s not a jaffle-shoot as in shooting jaffles with a gun…  it’s like in parachutes – jafflechutes. They come down from the sky with little parachutes attached.

“So, basically, Sam Wills aka The Boy With Tape On His Face arranged for a group of comics to get together at a certain place at a certain time and we had to follow some arrows on the ground to X-Marks-The-Spot and that’s where the jafflechute was going to happen.

“When we got there, we looked up at every plane or helicopter that went over because we thought there might be some Third World country sending jaffles down by parachute to us poor impoverished comics. But, suddenly, this mysterious figure appeared on the top of a building and started dropping toasted sandwiches attached to small parachutes.”

“Was he dressed as Spiderman?” I asked.

“No. In fact, everyone was dressed very casually.”

“Strange for such a formal occasion,” I suggested.

“Well,” said Juliette, “Frankie Lowe, my musical director, and I are currently editing together a video of what happened which we’re going to put on YouTube. As soon as I finish talking to you, I’m going to go and record a voice-over. It was really awesome fun.”

“Did you just say the word awesone?” I asked. 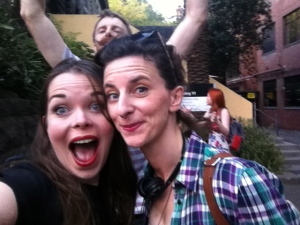 Juliette (left) in Oz with Felicity Ward and (behind) Squid Boy

“Yes,” said Juliette, “and, while we keep talking, I’ll send you a photo of me with Felicity Ward… Oh, Celia Pacquola was there too and Trygve – who does Squid Boy and Kraken – and, of course, Sam who is The Boy With Tape On His Face and Alexis who performs as Marcel Lucont…”

“It sounds like an upcoming Marvel superhero movie,” I said.

“…and we were all leaping about,” Juliette continued, “trying to catch melted cheese that was airborne… We were grabbing at floating food… So we’re going to post that video on YouTube soon. But now I have to go do the voice-over and then dress up as Kill Bill and Pulp Fiction for the party.”

Juliette is flying back to Britain tomorrow with stopovers in Bali and Dubai.

Tomorrow I might go to Watford with a green-eyed monster.

In the meantime, there is a timelapse video on YouTube which shows Juliette being prepared for a photoshoot promoting her upcoming Edinburgh Fringe comedy show Look At Me which is about the relationship between people’s external appearances and what they really are. She is co-writing it with comedienne Janey Godley.