What we need in Britain are firework parties celebrating the coronavirus… 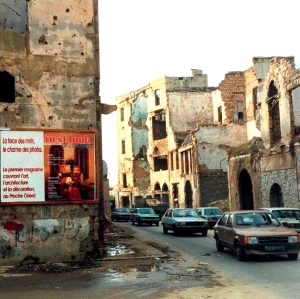 There was much celebration by way of firing sub-machines and sundry death-dealing devices in the air.

I stayed inside my hotel on the seafront that night on the basis that what goes up must come down and that, if people were firing hundreds of bullets vertically up into the air, the last place I would want to be would be under the airborne missiles which would inevitably succumb to the force of gravity.

Tonight, I was reminded of that night in Beirut.

In the erstwhile innocent days of my youth in Britain, we used to celebrate Guy Fawkes’ Night on 5th November with firework displays, parties and children begging in the street – a joyful, innocent time when we celebrated an attempt to overthrow the government with high explosives by setting fire to effigies of people (not all of them Guy Fawkes – sometimes politicians).

Then, in 1982, along came Steven Spielberg’s movie E.T. the Extra-Terrestrial which imported the European and American concept of Hallowe’en on 31st October with loads of fireworks, fancy costumes and parties.

The UK had largely ignored Hallowe’en until then. With the impact of Elliott, ET and international marketing, that worldwide commercialised concept soon mostly overwhelmed simple old Guy Fawkes’ Night.

A bit later, along came Diwali, the Hindu Festival of Lights which lasts for five days sometime between mid-October and mid-November, with fireworks and parties.

So we ended up, the last few years, with about two or three weeks of fireworks going off.

With the advent of COVID-19 this year – and with the UK in various national stages of lockdown – the two weeks of parties have mostly disappeared or been scaled-down dramatically. But we have had erratic firework outbreaks for the last couple of weeks or more and when I went out this evening – Diwali started on Thursday; this is Saturday – there were bangs and bangs and rat-a-tat-tats going off all over the place in the darkness. 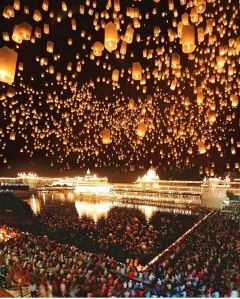 Diwali at The Golden Temple in pre-COVID days

Either that or I am having flashbacks to Beirut.

Diwali commendably symbolises the spiritual victory of light over darkness, good over evil and knowledge over ignorance. But this is Britain, so it may eventually turn into a festival of loud bangs, scared domestic pets and maimed children.

It strikes me that, as we already celebrate Hallowe’en (Death) and Guy Fawkes’ Night (Treason & Death), perhaps in years to come, we will – or should – nominate a day when we celebrate the coronavirus and everyone can dress up in blue masks, have parties, cough a lot and set off fireworks. For neatness’ sake, it should be held around mid-October to mid-November to coincide with the existing triumvirate of banging firework celebrations.

The origin of the banger-up-the-bum routine

One ‘Digger Dave’ tells me on my Facebook page that the legendary banger-up-the-bum routine made infamous by comic Chris Lynam and The Greatest Show on Legs originated when some aggrieved criminal in jail with Malcolm Hardee threatened to shove a stick of dynamite up Malcolm’s arse for selling him a jamjar full of wheat seeds in exchange for three packets of tobacco and telling him that the wheat seeds would turn into whisky.

As a result, Malcolm was transferred to Exeter prison farm for his own protection and later, on his release, turned the explosive threat into a spectacular entertainment.

Digger Dave also reckons a dodgy bloke in a Catford pub once threatened to shoot all the members of The Greatest Show on Legs after seeing their “Scotsman striptease” (I’m not quite sure which routine that is, but I’m open to enlightenment.)

For what it’s worth, Malcolm told me that the banger-up-the-bum routine originated when The Greatest Show on Legs were trying to come up with some even more spectacular act to follow their naked balloon dance routine and someone said: “Well, you’re wasting your time. You can’t follow the naked balloon dance. You might as well stick a firework up your arse!”

Malcolm either took this as a sensible suggestion or as a challenge and he was the first person to try out the banger-up-the-bum routine which involves holding a large firework – preferably a three-stage Roman Candle – between your clenched buttocks and lighting it to the musical accompaniment of Ethel Merman singing There’s No Business Like Show Business (other tunes are far less effective though the copyright holders of the Ethel Merman version won’t legally let it be used with the routine). Tragically, Malcolm told me, he lacked the necessary buttock control and, as a result, the lit firework drooped and set fire to his pubic (or should that be derriere) hair. According to Malcolm, fellow Greatest Show on Legs member Chris Lynam had tighter buttock control, successfully did the act as part of their show and has become the living legend he is today.

Which of these two stories – if either – is the true origin of the banger-up-the-bum routine I know not. Personally, I prefer the prison threat story… When in doubt, particularly where Malcolm is concerned, print the legend.

(This blog originally appeared in What’s On Stage)

The Malcolm Hardee Documentary Preview at the Newsroom on Saturday attracted 21 people. Not bad for an event that is not listed in the Fringe Programme.

Interestingly, as one, 19 of them walked simultaneously out of the screening.

The cause appeared to be the sight of a naked Chris Lynam performing the Greatest Show on Legs’ infamous ‘banger-up-the-bum’ routine in which a firework (preferably a three-stage Roman Candle) is inserted between the buttocks of the naked performer and lit (normally by the late Malcolm Hardee).

The apparently offensive routine was filmed at The Tunnel Palladium sometime between 1984-1988.

Malcolm’s ashes will be turning happily in his urn.