Some people are just unstoppable.

Janey Godley’s autobiography Handstands in the Dark (a bestseller in 2005 and 2006) is published for the first time as an audio book today and she appears yet again as a panellist on BBC1’s Have I Got News For You tomorrow night.

Penguin Books recently reprinted Handstands in the Dark with a new cover and new introduction. Frank Get the Door!, a book transcribing some of her viral video voiceovers, made the Sunday Times bestseller list last year. Her first novel is coming out next year. The Last Mermaid, a 2019 short film she co-wrote and starred in, won a couple of awards at Berlin and in Scotland; and she starred in a series of lockdown monologues for the National Theatre of Scotland.

In other words, she is on a roll.

Her nationwide UK comedy tour, which was interrupted by the Covid pandemic last year, re-starts this autumn. Her political voice-over videos have made her a worldwide viral YouTube hit complemented by animal voice-over videos and more family-friendly videos featuring her dog Honey.

Over the last few years, she has also built-up a massive following for her weekly podcasts, online pandemic chats with her daughter Ashley Storrie, random appearances on UK radio and TV, a weekly column in The Herald newspaper (she used to have a weekly column in The Scotsman) and what seem like daily news items in Scotland’s Daily Record about her Tweets.

Ashley has appeared in various BBC TV comedy series, has her own weekly BBC Scotland radio show and today BBC iPlayer (UK only) has posted online the new BBC3 comedy drama pilot Dinosaur in which she has the lead part as an undiagnosed autistic woman. It will be screened on BBC1 on 7th June and was made by Two Brothers Pictures, producers of Fleabag.

BBC TV have also just announced a new documentary series next year: Ashley & Janey Get a Real Job following the duo round the country doing things like working on a fishing boat (!)

So, obviously, I had to have a chat with Janey.

But what I was really interested in was the extraordinary range of her online commercial merchandise – everything from the normal and to-be-expected mugs and T-shirts to – extraordinarily – greetings cards, her artwork and bottles of Janey’s own Frank Get The Door! and Aw The Sandras branded gin at £32 a bottle… 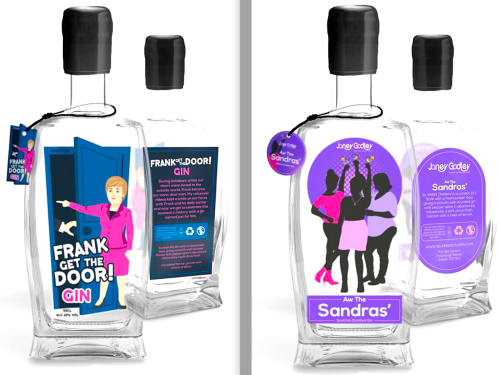 JOHN: I’m not surprised. You’ve been running round like a blue-arsed fly.

JANEY: I think it’s just… Well, I got shingles, which I’ve never had.

JANEY: It was connected to the shingles and it started the morning I was filming with Joanna Lumley. I woke up, the whole world went sideways and I thought I was having a stroke. And we were filming on an old, bumpy bus.

JOHN: Your merchandise is everything from pens and mugs, T-shirts and face masks to bottles of gin. So how did that start? You were maybe a third of the way through a national UK tour, Covid hit and you had no live comedy income at all…

JANEY: And then Frank Get The Door! (the catchphrase from her viral Nicola Sturgeon voice-over videos) became really famous so we decided to make Frank Get The Door! T-shirts. My husband Sean got on LinkedIn and somebody recommended this guy lan Adie of Promotional Warehouse in Glasgow… I called him and he said: “You came to the right place at last, because I don’t need a deposit off you. We’ll make it and we’ll share it.”

The very first wave was T-shirts, clicky pens and cups.

I told him: “It’s not going to do very much but, even if it does, I’m going to donate 100% of my profit to the STV Children’s Appeal.”

So they went on sale that first weekend, back in June/July last year… and he phoned me on the Monday and said: “Oh my God! We have sold 7,000 units!”

The first wave brought in £25,000 for the STV Children’s Appeal, which I don’t regret. I’m still happy that happened, despite HMRC (the UK government’s tax authority)… We had to pay tax on it… If you’re selling goods for a charity – not donations but selling goods for a charity – you still have to pay VAT because it’s sale through goods. Because people could say they have passed it on to charity but not done it.

JOHN: Even if you get a receipt from the charity?

JOHN: And are you still donating your profit on those items to STV?

JOHN: You branched into other merchandise…

JANEY: Well Ian Adie and I just clicked. He said: “We’ll do gin; we’ll do candles”… Then my daughter Ashley came up with this beautiful range – Neural Funky – because she was diagnosed with autism during lockdown… which was quite hard for her because we had always just thought that she was (LAUGHS) a bit weird… But, y’know…

JOHN: So now you have Janey Godley merchandise, Ashley Storrie merchandise and even Honey your dachshund has merchandise.

JANEY: Yes, Honey is now an earner. She cost us £8,000 when she nearly died the year before last, so…

JOHN: You’re on a roll. You survived having zero live comedy income for the last year and…

JANEY: My agent is very good. Every single day now we have to have a morning meeting where we go through the various offers that have come through. This morning (NAME BRAND) wanted me to do an advert for (A NOT INCONSIDERABLE SUM) and he said: “No, it’s not enough.”

I go back on tour in the Autumn, have one day off and then go straight into rehearsals for (A NOT-YET ANNOUNCED PROJECT).

JOHN: Penguin have just re-issued your 2005 autobiography Handstands in the Dark with a new cover, you have the new audiobook of Handstands in the Dark out now and your first novel is published by Hodder & Stoughton next year. Penguin must have suddenly realised how good you are if they’re bringing out an audio book after all this time. 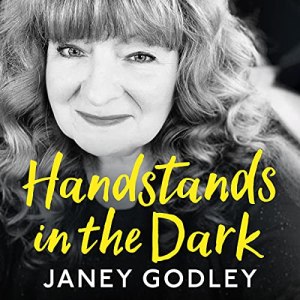 JANEY: No! The audio book is published by Hodder & Stoughton. Penguin didn’t want to do the audio version, so Hodder said We want to do it! and bought the audio rights from Penguin.

JOHN: Penguin are mad. You are on a roll not just in the UK but in the US because of your Trump sign.

JANEY: And Hodder want me to write another book.

JOHN: You should do a sequel to your Handstands in the Dark autobiography. It ends on a cliffhanger. You could go from the end of the first book to some new climactic point – the Trump Is a Cunt sign maybe.

Janey’s iconic comment went viral and is now available as a greetings card from her online shop.

JANEY: I don’t think I want to, John.

ASHLEY (IN THE BACKGROUND, FROM THE KITCHEN): Mum! We keep getting people saying: When’s the next book in that series coming out!

JOHN: Anyway… The novel you’ve written which is coming out next year – Was it easy to write?

JANEY: It was so hard to write it in lockdown. For one thing I had just had shingles. Plus my confidence was shot-to-fuck and I was really, really busy doing all the other stuff. I couldn’t focus on being creative because I kept on panicking that We’re all gonna die! So I was writing bits but kept on fixing bits and kept on fixing bits and…

Then Ashley and I were stood in the kitchen one night and she said to me: “Just fucking write it! If it’s shite, just write all the shite out of your system. It’s a vomit draft. Get it all out!” So I did.

I sent the ‘vomit draft’ off to Hodder and they got back to me after a week and said it was one of the best first drafts they’d ever had. They said it was publishable as it was, but the editing process since then has been really good.

Epilepsy Scotland gave me their offices to write it in and I got a researcher, Caitlin, who was fucking great. 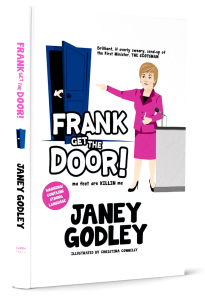 JOHN: And, in the meantime, you published Frank Get The Door!

JANEY: I didn’t think it would sell but, fuck, did it sell! It was in the Sunday Times bestseller list.

JOHN: Your videos go viral, so presumably there are sales of Frank Get The Door! worldwide because you are now known worldwide.

JANEY: And I’m about to write a Honey book – a family-friendly book.

JOHN: You will make Honey immortal.

JANEY: (LAUGHS) How are you now, John?

JOHN: Same as before.

JANEY: Can I be the headline act at your funeral when you die?

ASHLEY (FROM THE KITCHEN): Would you not rather have me? I’ve got TV credits. I’m just saying I’m in three upcoming television series.

JANEY: Yeah. You might be better with her headlining your funeral.

JOHN: How about you both as joint headliners?

ASHLEY: I don’t share my billing, but thankyou for the offer.