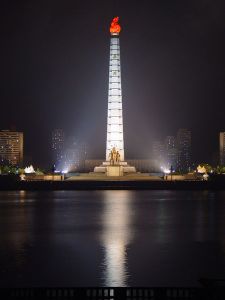 An amazing erection in Pyongyang: the Tower

(A version of this blog was also published on the Indian news website We Speak News.)

I think Apartheid in South Africa was doomed when they let television into the country. People could see what life was like outside the country.

Widespread tourism in North Korea brings much the same threat.

Being a North Korean must be like being a sheep or a goat. You are born into a place where people look after you and you learn to trust them and believe they care about your welfare. Then, one day, they may slit your throat and eat you with vegetables.

The Great Leader Kim Il-sung’s Juche Idea of self-reliance – much touted when I was here in 1986 – seems to have been superceded by the Songun philosophy of “military first” – which “prioritises the Korean People’s Army in the affairs of state and allocates national resources to the army first”. Interestingly, this first seriously appeared in 1995, the year after Kim Il-sung’s death, when his son the Dear Leader Kim Jong-il took over the country.

I wonder what sucking-up to the military Kim Jong-Il’s son the new Supreme Leader Kim Jong-un will have to do.

All towns seem to have at least one tall thin monument in a central position with slogans carved around or on it – the ultimate being the Tower of the Juche Idea in the country’s capital Pyongyang with eternal sculptured flame atop. It all seems a bit like worshipping a stone phallus erected in the middle of ancient communities with dwellings huddled round it.

We were taken to the national film studios today. The late Dear Leader Kim Jong-il was much bitten by the would-be-Hollywood bug. We were proudly told that he had visited the film studios more than 590 times. We were told the studios made 20 films each year. So that would be almost two per month with lots of overlapping.

But the studio buildings and the widespread backlot streets were deserted. The ladies and gents toilets were closed and had to be found and specially opened. The gents was flooded. Someone told me there appeared to be an old woman sleeping in the ladies toilet.

The man in charge of the film studios said that the Great Leader Kim Il-sung himself had given advice on the positioning of the studios. He had said they should be outside the city.

The school year here starts on April 1st, which seems a very appropriate date given some of the facts learned in school. We were taken to an ‘ordinary’ school today.

In reality, of course, foreign visitors are never taken to ‘ordinary’ schools.

The school we were taken to – the June the 9th Middle School Number One School – was closed. This is the fourth day of a two-day public holiday. the extra two days, we were told, are “because in the previous two days the people had to celebrate”.

Some children had been dragged in to perform for us. As with all performances in North Korea, they were perfect in every way, though with a slightly unsettling emphasis on accordion-playing.

I was very impressed by one small picture among many others stuck on a wall. It was of the small children undergoing military training – crawling under barbed wire and the rest.

Then we were taken to the War Museum where we had explained to us why the Korean War started. Basically, as I understood the story, the US made lots of money during the Second World War by selling its armaments. When the War finished, the US went into a big economic Depression and decided to start the Korean War to stop the Depression.

Last time I was here, in 1986, the line was that the Korean War started when the running dog South Korean lackeys of the US imperialists wantonly attacked North Korea, but the valiant North Koreans pluckily fought back, drove the Americans back to the sea and the Yanks begged for a peace treaty.

This fails somewhat to explain why the border between the two Koreas remains in the middle of the peninsula and, as told in 1986, the Chinese Army was not involved in any way. Presumably North Korean grandfathers who remember US/UN troops surging northwards through their village and then remember Chinese troops surging southwards through their village see the value of keeping schtum.

Today, I asked if many Chinese visitors came to the War Museum and if they saw the same rooms as us. “There are four Chinese rooms in the museum,” I was told, “but we do not have time to see them today.”

I do not really care. The more important factor to me is that, although there is some talk of the US conning the UN into being involved in the Korean War, it is the Americans who are 100% blamed (or credited) with the war. We see their downed aircraft, captured vehicles and photos of their POWs. Britain is never mentioned because it seems important to keep the focus of North Korea’s xenophobic hatred on the Americans alone.

That’s fine by me. It gives me a quieter life as a Brit.

In the evening, as a special treat, we are taken to Pyongyang’s main theatre for a special mega-performance by a cast of 2,000 in honour of Kim Il-sung’s 100th birthday. Broadway and Andrew Lloyd-Webber eat your heart out. A stupendous production of professional perfection. It is later put on YouTube:

But, really, you had to be there to appreciate the scale of it.

At a restaurant meal, one of our group tells me his story about being interviewed for a job in MI5. He passed the tests where you are given lots of disparate information from different sources about a fake situation and have to compile a risk assessment  situation report. He got through to the interview stage and failed. He says he thought it was because he was around 22 years old at the time and “they like more fully-formed people… all the others were older, maybe in their early 30s.”

I wonder how uni-directional the microphones are in the restaurant. I feel reassured that the North Koreans have better people to bug in this celebratory period.

When I get back to the hotel – our final night is unexpectedly in the 5-star Yanggakdo Hotel – the television, very bizarrely, has the BBC World TV channel on it. What are the authorities thinking of? North Korean workers in the hotel can see this. I think of South Africa and Apartheid.

The BBC is saying there has been a Los Angeles Times report with photos of US soldiers posing with the severed limbs and other body parts of suicide bombers… and North Korea has said it will no longer allow UN nuclear inspectors into the country because the US has withdrawn food aid to North Korea in response to the launch of their rocket last week.

We live in interesting times.

Most of it utterly unknown by the people of North Korea.