In 2017, oft-times comedy festival judge and linguistics expert Louisette Stodel asked me about my taste in comedy.

I posted Part 1 of this chat yesterday. 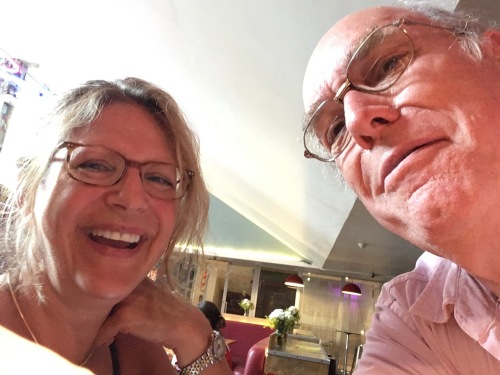 LOUISETTE: So you don’t like actors trying to be stand-up comics…

JOHN: To an extent. I am also allergic to a lot of character comedy. I don’t like character acts in general, though I do like some. I think the closer the ‘character’ is to reality – to being like a real person – the less I like it. But, if it’s a cartoon character – Charlie Chuck is a perfect example –  I like it.

I adore Simon Munnery; he can be very surreal, but I didn’t like his early Alan Parker, Urban Warrior character – It was too close to reality for me.

JOHN: Yes. I have met people who really are pretty-much like that. When I was a researcher for TV shows, I got typed for finding eccentrics and bizarre acts. I would find genuinely different-thinking people who did odd things and usually lived in provincial suburbia, bored out of their skulls with the mundanity of their lives, unable to unleash their inner originality and unconventionality.

So, if I watch a performer pretending to be eccentric, I think: Why am I watching someone faking a ‘performance’ when I could be watching the real thing? You can see in their eyes that these performers are not the real thing. They are sane people trying to be, to varying extents, oddballs they are not.

Well, all good comedians are, of course, mad to an extent.

LOUISETTE: They are not all mad.

JOHN: They are all unconventional thinkers or they have some personality disorder. The good ones. And I think one of the reasons I like watching comedy is I like watching some of the bizarre characters which a lot of comedians genuinely are. I don’t like people pretending to be odd characters, but I like watching people who ARE… well, a bit odd. They are the good comics for me.

There is maybe a difference with pure gag-delivery acts like Jimmy Carr, Milton Jones and Tim Vine.

LOUISETTE: But, getting back to character acts…

JOHN: If someone does a character act, they are pretending to be someone else, which is what an actor does… rather than being themselves or some version of themselves, which is what a modern comedian does. So, if I can watch a comedian – let us not mention Lewis Schaffer – with bizarre character traits, I am happy. If I watch an actor pretending to be a bizarre character but not being themselves, I am not really that interested because I can go out and find the real nutter.

LOUISETTE: So what you are saying is you want the person to be the person and you want that person to be nuts. Is that because there is no danger in playing a character, no risk except that the audience might not like it? Whereas, if the person is being themselves and they get it wrong or they go off the rails, there is a risk?

JOHN: I suppose so – like watching a motor race because there is always the danger of a disastrous crash.

LOUISETTE: I don’t think so.

JOHN: But you know how contestants in old-fashioned beauty contests were always asked their interests and they would say, “Oh! I’m interested in people”?

Well, I AM interested in people and how their minds work.

Most of my blogs are not objective blogs. They have very little of me in them. That is not because I am hiding me. It is because I’m interested in finding out how the other person’s mind works and – because they are usually creative in some way – how their creative juices shape their performance pieces or their life – how their mind creates original end-results. Or – because I sometimes mention crime – how their slightly non-mainstream thoughts work. And, of course, if there are quirky anecdotes in it, that’s great. I am interested in the people and I am a sucker for quirky anecdotes.

LOUISETTE: You say you are interested in the creative process – the thing that makes that person tick both on and off stage – But how do you analyse that? How do you figure out from somebody’s performance – even if it’s very close to the real person – what that real person’s process is?

JOHN: I don’t know. Maybe that’s why I keep watching people perform. If I knew everything, there would be no point seeing any other act.

LOUISETTE: But what are you looking for?

At a distance, people are similar but, up close, they are, like Charlie Chuck, unique

JOHN: Yes. It sounds wanky to say it out loud, but people are infinitely interesting, yes. At a distance, people are just a mass of similar heads but, in China, the Terracotta Warriors in Xian all have individual faces.

LOUISETTE: How does that come into it?

JOHN: I have no idea. I’m making this up as I go along. But, if you read about identical twins, they are usually a bit the same but a lot different. I’m interested in individuality. It’s not nature OR nurture. It’s BOTH that creates infinite uniqueness.

LOUISETTE: I’m still interested in getting at this elementary, basic thing that you are looking for. You do not want things to be off-pat. You don’t want an act to be overly polished. But what about someone like Spencer Jones who has a very well-formed act.

LOUISETTE: Yes, that’s why I am asking you…

LOUISETTE: Is he prop comedy?

JOHN: I dunno. Martin Soan created The Naked Balloon Dance for The Greatest Show on Legs… The Balloon Dance has to be done exactly as it is choreographed.

The whole point is that you never see any naughty bits and therefore the balloons have to be… It looks chaotic, but, if it were actually done willy-nilly – if that’s an appropriate phrase – it would fall apart and would not be as funny.

LOUISETTE: You said it LOOKS chaotic. Do you enjoy that? What you are saying is that, if it looks chaotic but it actually isn’t…

JOHN: Maybe prop comedy and physical comedy are different to stand-up. I suppose with Spencer Jones, you are shocked by the use of the props; the… unexpectedness… This… this falls apart as an argument, doesn’t it? There must be something different…

I like pun comedy: Tim Vine, Milton Jones, Darren Walsh, Leo Kearse to an extent. They are very tightly pre-scripted or, at least, prepared. With puns, if they have a vast number of puns, they can move the order around but the flow, the pacing, the momentum has to be kept going so they need to be highly pre-prepared.

JOHN: Indeed. And I remember one Tiswas production meeting, after the show had been going for years, where the producer said: “We have to figure out some way to make things go wrong during the show.” Because they had been going for so many years, all likelihoods were covered-for in pre-production meetings. Everyone was very experienced, very professional and nothing really went wrong that threw everything off course. You could script-in things to go wrong, but nothing ever went genuinely disastrously wrong of its own accord.

JOHN: I do like anarchy. I don’t especially want to see a Michael McIntyre show because it will be too smoothly professional. I do prefer shows that are up-and-down like a roller-coaster in an anarchic way. Though, if it involves immense detail like props or puns, then you can’t have real anarchy. The only way to have apparent anarchy with props and puns and tight gag-gag-gag routines is to prepare it all very carefully.

So I am… I am getting schizophrenic here, aren’t I…?

LOUISETTE: You are. But that’s good. I was discussing it with Frankie (Louisette’s son Frankie Brickman) and he asked me if it was unpredictability you like or feigned unpredictability.

JOHN: Maybe if they feign the unpredictability in a very professional way and I don’t spot the fact it’s feigned…