I have said it here before. What’s the point of having a blog if you can’t have a moan?

My mother had the eye disease glaucoma. So did my father’s mother. And so, I think, did my mother’s cousin. It is hereditary.

If you get it and the doctors catch it early, you can be cured. If they catch it late, there is no cure. You will go blind.

So I have regular eye tests.

After the last eye test, my local optician said the pressure on my right eye (always my weakest eye) was slightly – but only slightly – abnormal. So she sent me for more tests at the Ophthalmology department of my local NHS hospital. I went yesterday afternoon.

I am not going to name the hospital because the people who dealt with me were well-meaning people and trying to do their best. But, as in most of the rest of life, meaning well gets tsunamied by Sod’s Law and everything goes arse-over-tit.

When I eventually got an appointment, it was not in a letter. I got a phone call last Friday (the 8th) from a computer with an automated voice. It told me I had an eye appointment at my local hospital on Thursday the 14th at twndthee.

I phoned the number a couple more times and, as far as I could tell, the automated voice was saying “twenty to three” but I was only, perhaps, 65% certain. It might have been twenty past three or something else to do with three. Or possibly two. If it was, indeed, saying “twenty to three” they had, presumably, programmed the computer to say that phrase as it is friendlier than saying “two forty”.

A good intention. But the result was less clear.

I decided to wait for the inevitable letter.

This arrived on Monday confirming that, indeed, my appointment was at 2.40pm.

On Wednesday, I got a phone call from a genuine and very polite human being asking if I could come a little earlier – 1.30 instead of 2.40.

No problem. All agreed. Earlier appointment at 1.30 was confirmed.

Yesterday morning, my eternally un-named friend asked me: “Are you going to drive there?”

“Ah!” I said. “I had forgotten about that. I think they put eye-drops in and warn you not to drive.”

I looked at the letter.

“There’s nothing in the letter about it,” I said.

So I phoned up the telephone number on the letter.

“What is your reference number?” I was asked by the very amiable man on the other end of the line.

I read the reference number on the letter.

“Not that number,” said the very amiable man. “I need the reference number.”

“That is the only number I have,” I said.

“What is your NHS number?” he asked.

I read it off the letter. There was a pause.

“…and what is your password?” the very amiable man asked.

“It is on one of your reference sheets with the reference number,” said the very amiable man.

“I only have one sheet,” I replied.

“I cannot process your request without a password,” said the very amiable man. “The reference number and password are on the referral letter sent by your GP to the Hospital.”

“I don’t have any copy of that,” I said. “I only have the appointment letter sent to me by the hospital.”

“I need a password to process your request,” said the very amiable man.

“I am having eye tests at the hospital in a couple of hours for glaucoma,” I said “and just wanted to know if I was allowed to drive. I wondered if they might be putting eye drops in which would mean I shouldn’t drive.”

So, yesterday, I got a bus to my local hospital for the 1.30pm appointment. I arrived early and had a cup of tea. Then:

1.20pm – I turn up, present my letter to the receptionist and point out I have been asked to come for the earlier 1.30 appointment. No problem. I am logged in.

2.25pm – I think it best to check. I politely asked the receptionist if he can double-check what time my appointment is. Much fiddling on computer. “Two forty,” he says slightly aggressively. “Ah,” I say.

2.35pm – I am called in to the very amiable nurse, who makes the first tests on my eyes, photographs the back of my eyes and tells me she doesn’t think there’s any real problem, but I will be having two more sets of tests by other people and then seeing the Consultant. 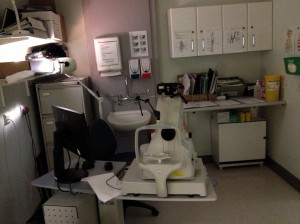 2.50pm – She takes me to another examination room and says, “Wait in here. You may have to wait a bit of time for the other tests.” I sit down. She leaves.

2.59pm – Another very amiable nurse comes into the room to get something and is surprised I am sitting there. I tell her why and I describe the nurse who left me. This second very amiable nurse takes my name and goes off saying “I will check.” I tell her: “The other nurse told me I might have to wait a bit.” The second nurse tells me with a smile: “Don’t worry unless it starts to get dark.”

3.06pm – The second very amiable nurse comes back into the room again to get something, looks surprised again and asks, “Any luck yet?” I say , “No.”

3.11pm – The original very amiable nurse comes into the room to get something, looks surprised to find me there, and says: “Oh, you’re not supposed to be in here: you’re supposed to sit outside” (in the corridor). I go and sit on a row of seats in the corridor.

3.17pm – I hear my name being called about 15 feet to my left, in the original waiting room. It is a very amiable Consultant. He examines my eyes.

The end result is he says I have no signs of glaucoma. “Your nerves are way too healthy,” he tells me. “When I look at them, they’re lovely and pink, lots of nerve tissue there. You’ve got thick corneas so, when they test your pressure, particularly with the air puff machine, they’re going to get false, high readings. The most important question is Is this pressure damaging your nerve? and the answer is No. Your nerves look 100% healthy. They’re lovely.”

Everyone was very amiable.

The organisation was a mess.

No one person was to blame.

I guess death in the NHS is much the same.