Yesterday’s blog was about Ariane Sherine’s comic music video of her Love Song For Jeremy Corbyn. I play the UK Labour Party leader. In just over a day, the YouTube video had been seen by over 2,000 people.

There has been feedback.

After Ariane Tweeted: “Joking aside, I am going to vote Labour on June 8th, and I urge you to do the same,” one annoyed woman Tweeted: “I am wondering quite genuinely what would move you to compose such a vituperative piece of video.”

When I pointed out that ‘humour’ was involved, the lady replied sic in three Tweets (too many letters for one): “Assuming your epreiteration affirms your claim that this was purely ‘humour’ rather than malice emitting flatus or being urinated on by dogs it seems to be pitched at those who would laugh as easily at people falling over.”

So I think this shows both that the video has hit a wide audience and proved that a little linguistic learning is no guarantee of coherence.

She has a point.

The top reviews are in: “Part sex god and part tragic hero”

On Facebook, Mervyn Stutter, the talent-spotting equivalent of Simon Cowell at the Edinburgh Fringe for over a quarter of a century, appeared to want to book me on his Fringe show this year but, on further probing, backtracked, saying: “We only want the bed scene. Can you do 5 minutes?”

I find that both sexist and ageist.

A more heartwarming response was from Mysterious Mark who runs the British Comedy Guide website. He is nicknamed ‘Mysterious Mark’ because he does not like photos being taken of him and, a couple of people have told me, he seems not to cast reflections in mirrors.

“I’m not sure if this is flattering or not to say John, but I honestly didn’t recognise you until about half way through watching the video. Then I remembered you mentioning, the last time we met, that you were about to play the Labour leader and it all came together in my mind and I went “WOAH! WOAH! WOAH! IS IT? YES, IT IS JOHN!”. It wasn’t until the credits rolled I was 100% sure though. It really is a fantastic video… well, apart from the bit where we get to see your thrusting behind,”

Ariane preparing for a sad part of the video

I told him that Ariane has great attention to detail.

She downloaded four headshots of Jeremy Corbyn from the internet (different angles) and then had them blown up and combined onto what I guess was an A2 photograph.

She then booked me into a top hair stylist and they cut my beard to the correct shape with those photos as reference. My eyebrows are bushier than Corbyn’s, so they lessened the depth (front to back) of my eyebrows and re-shaped them. He also has a pointier chin than me but the shaping of the beard helped change my apparent jaw shape.

We were going to add hair on top (Corbyn is not bald on top; I am) but this didn’t work properly, so she bought a Lenin hat and a Panama hat – both of the exact type and colour Corbyn has worn – (the Panama hat band is of a colour type he has worn). So the top of my head is covered at all times. Interesting aside – a Lenin cap and a Lennon cap are the same thing, which I had not consciously twigged.

The suit colours are as per Corbyn and the spectacles were replicas of the type Corbyn has appeared in (The bastard now seems to not wear specs!!!) 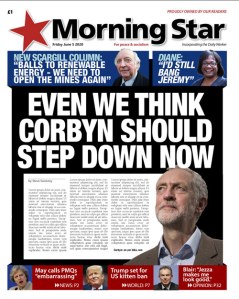 Morning Star front-page; the back is even better

There are two jokey fake Morning Star covers and back pages in correct type style. And much more.

The props, hair and beard trims and extras appearing in crowd scenes cost Ariane over £1,000 combined.

The video was shot and edited by the unnecessarily tall Graham Nunn, Ariane’s best friend of 20 years whom she married for real last month.

He gave Ariane £50 worth of ASOS vouchers for Christmas and she spent them on a wedding dress for the Corbyn video – not knowing that she and Graham would fall back in love and she would end up marrying him for real in the Corbyn dress in Las Vegas.

Love Song for Jeremy Corbyn is only the second script she has done since leaving television writing in 2008. The last television series she worked on was the BBC1 primetime sitcom My Family.

Ariane has been involved in various videos since then, including one for her Hitler Moustache song in which Charlie Brooker (creator of Black Mirror) and her now-husband Graham Nunn both appeared.

Love Song for Jeremy Corbyn is the first video she has ever directed.

“At times,” she says, “I got frustrated with the process, but I think I got the best out of John Fleming and he’s actually a really decent actor, given that I cast him for his looks rather than his acting!”

That is one of the crosses I have to bear. Women just want me for my body, not for my mind. In fact, Ariane had tried to hire a professional Jeremy Corbyn lookalike to cavort in bed with her. There were plenty available, but the going rate – for example at the Susan Scott Lookalikes agency – was “£600 for up to three hours plus expenses plus VAT” which, Ariane says, “made me think it might be cheaper to hire the man himself.”

She settled for me because although I would nor work for peanuts (I don’t like them) I would work for green tea and Tesco baked beans. 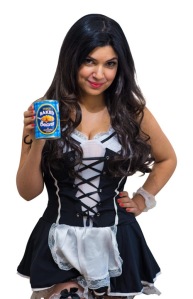 “The extras,” says Ariane, “were all brilliant and I couldn’t have asked for more professional, easy-to-work-with, punctual supporting actors. It could have been stressful, but I totally loved the day of the ensemble shoot.

“It was hard to simultaneously act and direct. The scene where John is singing to me (the singing voice is actually her husband Graham’s) and taking the engagement ring out of his pocket was the hardest to get right. In contrast, the sex scenes were surprisingly easy!”

It has been often said that I am surprisingly easy, bordering on the desperate.

Ariane’s favourite scene is the one in which Jeremy Corbyn looks at a framed photo of Diane Abbott during sex and has an immediate orgasm. I suggested I should twitch my toes at this point, which Ariane thought worked well.

Ariane has said in print: “John’s house, used for the shoot, is still cluttered with Jeremy Corbyn video props. At some stage, he will get his house back.”

I am not so sure. As with my house, so with my sanity.

There is a clause in my contract with Ariane saying that I will have my house back but, as all Marx Brothers fans will atest, everybody knows there ain’t no Sanity Clause.

And yes, obviously, my threshold of shame is high.

Love Song For Jeremy Corbyn is one of 13 tracks on Ariane’s album Beautiful Filth, which is available on iTunes, Amazon, Spotify etc.