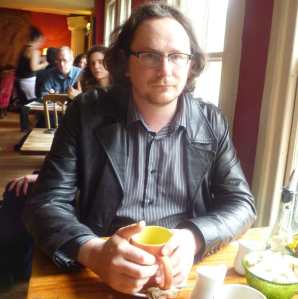 From Cambridge Classics to standing in a red comedy bucket

In yesterday’s blog, I mentioned Michael Brunström standing in a bucket of water passionately reading a random article from a copy of Yachting magazine.

What sort of man does this?

Well, in Michael’s case, someone who studied Classics – Greek and Latin – at Cambridge University and who is now an editor at the publishers Frances Lincoln.

“So,” I asked him, “you’re doing your first solo show at the Edinburgh Fringe in August?”

“Yes,” said Michael. “Ten performances of a one-hour solo show – The Human Loire. It’s a series of acts with an arc incorporated into it.”

Michael Brunström stands in a bucket of water

“That’s a very editory-word,” I said. “Did you always want to be in publishing?”

“I was looking for any job in publishing. After university, I bummed around fringe theatre doing stage management for a couple of years. But I hated it. I wanted to be a director and a playwright.”

“It was the people I didn’t like,” he told me. “I just found them so up-their-own-arses and so jealous and petty and squabbling all the time.”

“About eight years ago,” explained Michael, “I came out of a pub in Kentish Town and I bumped into Ken Campbell. I was a bit drunk, so I said: I want to meet you. I’m a fan. We started chatting and I was very nervous and I was trying to impress him. We came to a door and he said: Are you coming in? 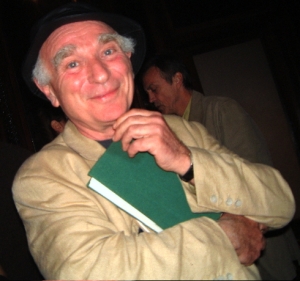 “I went through the door and it was the Torriano Meeting House – a rehearsal space – and there were a bunch of I guess you’d call them actors.”

“They weren’t like the actors I’d known previously,” Michael told me. “They were all very welcoming and friendly. He was teaching ‘bardic extemporisation’.”

“Do you know how to stick a nail up your nose?” I asked. “Everyone who ever worked with Ken Campbell seems to hammer a nail up their nose.”

“I’m not sure I’d give it a go myself,” said Michael, “but apparently there is a sizeable cavity up there.”

“Yes. It was fantastic! It had ventriloquism, some improvised singing and we sang Lord of The Dance and some Björk was played. It was held in Epping Forest – it was a kind of organic funeral – and we were under this awning and it was slightly pouring with rain. There was one slightly dull speech given by someone from a university who had awarded Ken an honorary degree and, right in the middle of that, this gust of wind whipped up the awning and deposited an enormous amount of water onto some random woman at the end. There was a crazy guy in the front row who had a mental fit and tried to rip the coffin lid off. I don’t know how staged that was. Ken’s coffin was taken to the graveside on a trolley pulled by his dogs.”

“Not chihuahuas…?” I asked.

“No,” said Michael. “It was Ken who got me doing improvisation, so I’ve mainly been doing improv the last few years, in a group called The Inflatables.”

“You tend towards surrealism” – “I guess I do”

“When I first saw you perform at the Etc Theatre in Camden,” I said, “there was an element of quirky originality. You tend towards surrealism.”

“But being a book editor,” I suggested, “is almost the opposite of improvised, surreal comedy sketch madness.”

“Ken would have called it enantiodromic,” said Michael.

“It’s Greek,” said Michael. “Enantiodromia is about having different aspects to your personality.”

“What does it mean in Greek?” I asked.

“Flowing in different directions at the same time. I have a side of me that likes to correct and control but there’s also a Dionysian side. Neitzsche wrote a book which said what you need for a tragedy is to combine the Apollonian aspects with the Dionysian aspects. Apollo is the god of learning and refinement and poetry. Dionysus is the god of wine and of chaos and of madness and delirium.

“So I spend half my time being very Apollonian and controlling, with close attention to detail, correcting other people’s work… but I also spend some of my time being Dionysian.”

“So what did you want to be when you were a kid?” I asked.

“I probably just wanted to be unaccountably famous.”

“You don’t come across like that,” I said. “You seem quite shy.”

“But then I suppose that’s performers,” I said. “You expect them to be extroverts, but offstage they’re often hiding in their shell not wanting to do publicity.”

“A lot of improvisers are shy,” said Michael. “Comedians are less shy.”

“They’re more neurotic,” I agreed. “You would consider yourself an improviser not a comedian?”

“Very few people do jokes now,” I said. “It’s all storytelling with occasional punchlines and it’s mostly the way the stories are told.”

“With my act,” said Michael, “I’m thinking Sylvester McCoy, I’m thinking The Great Gonzo in The Muppet Show. I have yet to place myself in terms of what sort of comedy I do.”

On YouTube, there is a 1min 21sec video version of Lazy Fork by Nux Veybarein (1899-1983), translated and performed by Michael

Yesterday I met a man from Atlantis who speaks Japanese

For ages, I have thought there was mileage in a Real People chat show on TV – if you go to any bus queue in any town in Britain and choose any person at random then, with the right questions, that person will reveal the most extraordinary life story.

Life truly is stranger than fiction. Novels are very often watered-down versions of the truth and they have been watered-down simply to make them believable.

I was reminded of this when I was passing through the food department of Selfridges in Oxford Street yesterday and I was offered a free tea sample by a Greek-Bulgarian sales specialist working for the East India Company which was bought by an Indian entrepreneur in 2005 and which opened a shop in London’s West End last year. It turned out the tea-offerer was from the island of Santorini (claimed by some to be the origin of the legend of Atlantis). He told me he spoke six languages including Japanese and Scots Gaelic – which he then proceeded to do.

It is a tad odd to have a Greek-Bulgarian from Atlantis who works for the East India Company (given its charter by Queen Elizabeth I in 1600) speak Gaelic to you when you are passing through the food department of Selfridges department store.

To surprise me, it would have been enough for him, as a Greek-Bulgarian, just to work for the fabled East India Company because I hadn’t realised it had been re-born.

While being one of the most successful commercial companies ever to exist –  at its height, the company allegedly generated half of world trade and it established Singapore and Hong Kong as trading centres – it also effectively ruled India with its own army on behalf of the British government 1757-1858 and virtually built the British Empire by monopolising the Opium Trade – it was responsible both for the Opium Wars and the Indian Mutiny!

That Indian entrepreneur – Sanjiv Mehta – who bought the name in 2005 and re-started the company last year is a near genius. People are buying recognisable brand names for millions of pounds/dollars all over the world and the East India Company must be one of the most famous names worldwide – it has been around for 411 years – though I’m not sure trade with China will be easy!

So it would have been enough for the tea-offerer, as a Greek-Bulgarian, just to work for the fabled East India Company but, good heavens – perhaps you had to be there – a Greek-Bulgarian who works for the East India Company, comes from the original Atlantis and speaks Gaelic! What are the odds of that combination happening? If you wrote a novel with a character like that in it, people would laugh at how stupid you were for including such a literally incredible character…