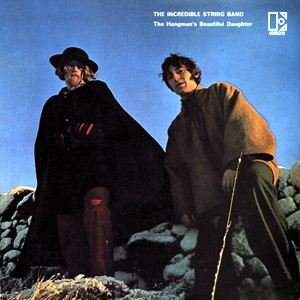 “The Hangman’s Beautiful Daughter” album by the Incredible String Band. Unlike Bob Dylan, at least they could sort-of sing

I was never a fan of Bob Dylan. He could not sing.

But, in the 1960s, when they were still influenced by Hinduism and before they discovered Scientology, I was an enormous admirer of The Incredible String Band. It was through their records on the Elektra label that I first became aware of the highly influential producer Joe Boyd.

Along the way, he also produced Pink Floyd, Fairport Convention, REM, Billy Bragg, Taj Mahal etc etc and opened the highly influential UFO Club in London. Then, as head of music for Warner Brothers Films, he organised the scoring of Clockwork Orange, Deliverance and McCabe and Mrs Miller and co-directed Jimi Hendrix, a feature-length documentary. He later went into partnership with legendary American movie producer Don Simpson to develop film projects and later still was Executive Producer on the British movie Scandal.

Last night, he was at the Sohemian Society in London, reading from his autobiography White Bicycles: Making Music in the 1960s. He also shared a memory from 1965, when he was one year out of Harvard University and working at the Newport Folk Festival.

A Newport Folk Festival had been held on Rhode Island in 1958 and 1959 – a commercial event staged by producer/promoter George Wein, who already organised the Newport Jazz Festival.

It then stopped for three years and re-started in 1963, run by a non-profit foundation which put money back into preserving traditional culture in America.

Joe Boyd had gone to the Newport Folk Festival in 1963 and now, aged 23 in 1965, he was production manager at the festival, working for George Wein. This is what Joe said last night:

When Dylan appeared at Newport in 1965, the Beatles’ songs were all still about love – boy meets girl. They released Rubber Soul later that year. The Rolling Stones were still doing R&B-inflected pop music; they were dressing up to do Top of the Pops. They were part of the world of pop music. The word ‘Rock’ as a term was seldom used before 1965. There was pop music…

And then there was folk music, which was this whole other thing and the Newport Folk Festival was this very idealistic thing. Everybody got paid the same – $25 per day plus room and board. And Newport was this huge event. People, kids from all over the country came and camped out to go to it.

But it was a kinda elite audience – the kids who were most aware who would actually sit and listen to a fiddler from Texas who was 75 years old or prisoners from Texas doing something. They were glued to this. It was not a pop audience.

That summer, the airwaves had been suddenly… out of the blue… completely startling… there was Mr Tambourine Man by The Byrds, I Got You Babe by Sonny & Cher which had Sonny imitating Dylan – sounding and doing a kind of take-off of Dylan’s vocals, which indicated how important Dylan had become.

Then Dylan released his six minute single Like a Rolling Stone with drums and Al Kooper’s organ and everyone who arrived at the Newport Folk Festival was asking this question: What is Dylan gonna do? because he’d never performed with a band before and would he dare? Electric? Impossible! Not at Newport!

And then there was this divide between the older generation – the political folk music people – and the kids who thought Hey! We thought Bluegrass banjo was cool and exciting three years ago but now we think the Beatles are cool and exciting.

And what Dylan was doing on his record was just unbelievable. And then the Paul Butterfield Blues Band were shoe-horned into the festival at the last minute.

So the idea that this guy would come and play a loud electric guitar at Newport was outrageous and shocking to a lot of people and transgressive really.

I loved the idea that he might play an electric guitar. I was kinda excited by Butterfield playing, because I’d helped sign him to Elektra.

And so the Butterfield band played the end of the Blues Workshop on the Saturday afternoon. There had been Son House and Robert Pete Williams and Skip James. It was authentic, real Blues singers from the Thirties suddenly reappearing out of the mists of time and then, at the end, we moved all these amps on stage and (traditional folk music collector) Alan Lomax was introducing the whole thing and he just looked at us with such hatred.

We got the thing set up and then he introduced Butterfield by saying You’ve heard these wonderful musicians singing authentic Blues now here’s some kids from Chicago who’re going to try and play the Blues with the help of all this equipment.

And then he walked offstage and walked right past (Bob Dylan’s manager) Albert Grossman, who’d taken over as Butterfield’s manager and Grossman said That was a real chickenshit introduction and Lomax just pushed him Get out of my way! and they started fighting. These two guys started throwing punches and they had to be pulled apart.

So there was this absolutely cut-it-with-a-knife tension, confrontation.

And the other thing that was going on was the Old Guard were walking round among the kids in the camp area and in the audience and among the stalls and there was this smell they hadn’t smelled before. And then somebody said It’s all Grossman’s fault, because Grossman was known as a real connoisseur of dope and he certainly was giving dope to favoured musicians backstage, so they tried to ban him from the festival and George Wein had to explain to them You can’t do it, because Dylan’s gonna walk, Peter, Paul & Mary will walk, Butterfield will walk. It’ll be a disaster.

So there was this huge tension and then Dylan came on, played, some people booed, some people didn’t. The Old Guard tried to get me to turn the volume down. I went out to the sound control. Peter Yarrow (of Peter, Paul & Mary) was there and he was on the board of the festival. He was sitting there next to Paul Rothchild who was mixing the sound and I said Lomax and Seeger want the sound turned down and he said Tell them the board is adequately represented at the sound controls and the board here thinks it’s just right. Oh and, by the way, tell them (raising his middle finger).

That was the atmosphere. It was so confrontational.

When Dylan played, some people booed, some people cheered. They only knew three numbers, so then everybody left the stage. He was supposed to do 45 minutes; he only did 15. Some people were cheering. Finally, he came back on with just his acoustic guitar and sang Mr Tambourine Man brilliantly, reclaiming the song from the shiny but shallow Byrds’ version. He finished with It’s All Over Now Baby Blue.

He didn’t close the show. He was in the middle of the first half.

As Joe Boyd says in his book White Bicycles:

The significance of many watershed events is apparent only in retrospect; this was clear at the time. The old guard hung their heads in defeat while the young, far from being triumphant, were chastened. They realised that in their victory lay the death of something wonderful. The rebels were like children who’d been looking for something to break and realized, as they looked at the pieces, what a beautiful thing it had been. The festival would never be the same, nor would popular music and nor would ‘youth culture’. Anyone wishing to portray the history of the Sixties as a journey from idealism to hedonism could place the hinge at around 9.30 on the night of 25 July 1965.