Hobbs & Shaw and the John Wick films: nonsense plots – Why does Wick work?

I saw Hobbs & Shaw tonight. The spin-off movie from the Fast & Furious franchise.

Now, everyone’s tastes are different and this is only my own personal view and, anyway, what on earth do I know about making multi-million dollar mega-movies? But…

What a load of old rubbish.

It’s technically very proficient, there’s a staggering amount of work put into it and it looks like all the money (an alleged $200 million) is up there on screen and I can see why it is making a lot of money at the US box office… but what a load of old cobblers.

I don’t necessarily object to scripts that are utter nonsense.

The storylines for all three of the John Wick movies are similarly a right load of old cobblers. But all three (especially the third, which allegedly cost only $75 million) are tremendously enjoyable. Whereas Hobbs & Shaw was not; it was like The Blues Brothers, where you just watched lots happening and the budget spiral on screen. (It cost around $30 million in 1980.)

But I don’t think the plot of Hobbs & Shaw (though nonsense) was the main problem.

It is what I like to think of as the Batman & Robin problem.

The first Batman movie franchise was brought down by Batman & Robin, directed by the usually fairly dependable Joel Schumacher.

The trouble with Batman & Robin was that there was a lot happening.

But a lot of the action scenes involved special visual effects, which meant that there was no way to effectively have an establishing shot or wide shot of the action… because the action was actually NOT happening – it was a series of abstract action shots.

There was not really any easy way round that because of the use of post-production effects.

With Hobbs & Shaw there was a similar problem, though it looked like a lot of the effects were physical not visual effects.

Lots of quick-cutting to make it all feel frantic and exciting for the video-game-playing, post-MTV generation. But they were abstract, fast-moving action shots so, deep-down, the viewer (I, at least) was distanced rather than drawn into the action sequences.

But back to audiences being psychologically involved in action sequences…

My favourite film is probably still The Wild Bunch (1969), Sam Peckinpah’s western set in 1913 about “nine men who came too late and stayed too long” – a movie which you can maybe only fully appreciate once you are over a certain age. 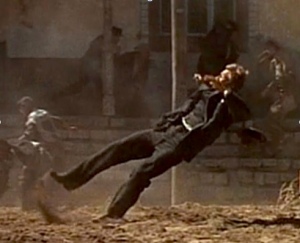 Sam Peckinpah’s The Wild Bunch – “If they move, kill ‘em!”

A UK director once pointed out to me something I had never noticed about Sam Peckinpah films and which certainly holds true for The Wild Bunch.

The director pointed out to me that Peckinpah almost always uses a wide shot at the very beginning of (not just) action sequences.

Because your brain knew the layout of the location and the characters, it didn’t matter if he crossed the line. He could do anything, because you ‘believed’ in the reality of the scene.

The trouble with the action in Batman and Robin and in Hobbs & Shaw, to my mind, is that – certainly in the fight and battle scenes I saw tonight – you are just watching movement within the individual shots. It’s movie-movie action aplenty and your eyes may be stimulated by the movements, but your brain is not anchored in what it feels to be a real scene.

In the John Wick films, the geography of the action scenes is much clearer and therefore the brain believes it is within the action not just objectively watching the action.

I came out of John Wick 3 saying: “That was a load of old rubbish, but it was SO enjoyable.”

On the other hand, it could just be me writing a load of old rubbish in this blog.

Everyone’s tastes are different and this is only my personal view and what on earth do I know about making multi-million dollar mega-movies?