The food container, prepared as an audio enhancement device

Two years ago, my eternally-un-named friend came up with the ultimate mouse-catcher involving a bowl of water and a wooden ruler – the mice, in effect walked the plank.

This morning, she successfully demonstrated to me the ultimate and cheapest sound-booster for iPads and other electronic notepads.

She got a small, round, plastic food container – “They’re about 89p for 4 in Tesco,” she told me – cut a wide slit in it and put it over the corner of the iPad where the sound comes from. I can testify that this does work and I recommend the method highly. If you want similar custom-made sound-boosters, they are available from me at a mere £59.99p.

Meanwhile this blog’s occasional correspondent, Anna Smith, sent me an update headed Topiary Tragedy on what is happening in Vancouver. She works in a book shop. She wrote: 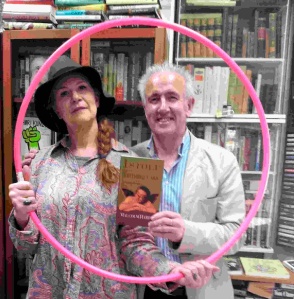 Anna Smith (left) within a hula hoop in Vancouver recently.

It has been a rough week in this paradise for topiary artists. It seems like half the people I know are being evicted, going crazy or in hospital with multiple issues.

When I arrived at the bookshop on Monday there was a note taped to the door – a pleading request for a list of books from one of my friends in hospital. I don’t know how she managed to get the note there.

There then followed a day of despairing people begging to sell dingy, second-hand books that I could not possibly buy. An artist from Kerala wanted endless information and told me I should start an agency called ‘Ask Anna’ and hire five ‘Annas’. A lonely actor, whom I like and who has schizophrenia, sat in a chair near my desk and spent four hours telling me about all the people he has been in the last few hundred years. He said he knows this is true because a very elegant psychic from Norway told him so. Then a guitarist dropped by to tell me he had spotted his teenage daughter a few days ago – she vanished last month. I could do nothing but listen.

Topiary struck back on Sunday.

One of our most beloved community leaders, 65-year-old Jim Deva, co-owner of our gay bookstore Little Sister’s, died after falling off a ladder. At first, I thought it must have been a ladder in the book shop but no, he had been trimming the bamboo outside of his apartment when he fell.

Little Sister’s bookstore, in its early days, had been bombed at least twice and was the subject of years of harassment from the federal government through Border Services, who diligently opened every single shipment of books from The United States. Eventually the government tried to locate a psychiatrist to support their court case and state that Little Sister’s was importing obscene material. They asked around, looking for someone who was an expert on homosexuality. Everyone told them to ask my dad (who had become a psychiatrist and was one of the first signatories of The American Psychiatric Association’s declaration that homosexuality is not an illness).

So, when they did ask him, he said he would read all the material they had seized but would have to charge them his regular psychiatrist rate.

Oh, yeah, and the European lesbians texted me from the marina last night. There was a storm and they have no fuel. They want to borrow my tiny butane stove.

I have absolutely no idea what any of that has to do with topiary.

It is perhaps best that some things remain unexplained.

Pretty soon, comedian Martin Soan will not be speaking to me. Lucky him…

Pretty soon, comedian Martin Soan will not be speaking to me. Lucky him, some might say.

Yesterday’s blog about things I cut out of my blogs reminded me of something else I had cut out but still had as an iPhone recording: a chat I had with Martin shortly after one of his several 60th birthday parties.

A couple of weeks ago, I posted a blog in which Martin talked about spirituality.

When he read it, he told me he thought it made him sound like a drunken airhead. I think what he said was very interesting. Okay, he was drunk, but he can still say interesting things when he’s drunk.

He was slightly drunk in this conversation, too, recorded shortly afterwards. If he doesn’t like what is quoted, he can always claim he was drunk. I do not have that excuse.

“I read an article years ago,” I was saying to Martin, “which suggested that, in the future, you’ll be able to manipulate molecules. Everything we see is just molecules. The air, the stone walls, my hand: they’re all just molecules. So, if you can control the molecules, you don’t need to have walls for your house that are permanent brick walls. You can make them of anything you want. You could reconfigure the walls’ structure with the press of a button. You could have leaves or television screens instead of walls and change them in the click of a button if you have access to the right molecular structure.”

“But going back to my previous drunken blog with you,” interrupted Martin, “about spirituality.”

“Much appreciated,” I said.

Martin started laughing loudly: “You think you could go down Argos and get it?”

“Within 100 years, we could manipulate molecules,” I said.

“But that,” said Martin, “wouldn’t necessarily mean you had any more understanding, would it?”

“It would mean different ways of living,” I said. “I mean, Shakespeare was only 400 years ago. The Queen Mother lived to over 100. The distance between Shakespeare’s time and now is only the length of four people’s lives.”

“But,” argued Martin, “for several millennia, Man’s been exactly the same.”

“In Shakespeare’s time,” I said, “there were people living in wattle huts.”

“When I came down to London for the first time when I was a kid,” I said, “you walked along Whitehall or looked at St Pancras Station and there was no detailing on the buildings, because it was all totally caked in black soot and it smelled of soot.

“In the thick pea-souper smogs, we got let off school early, the air smelled of sulphur or something and, if you held your arm out in front of you, you couldn’t see your hand. You had to move carefully along the pavements step by step and pray when you crossed a road. If you walk around now, it’s a completely different world.”

“What’s got worse?” I asked. “I read old newspapers when I was researching a TV programme and, in 1780-odd and 1880-odd, you could not walk down Regent Street in the daylight in mid-afternoon without the risk of getting mugged. They were calling out the army every Friday and Saturday night to quell drunken riots in places like Woking. The army! The more the cameras look at us and the more GCHQ hacks into us, the safer it will be.”

There was a long, long pause.

“John…” said Martin. There was another long pause “…John…” he repeated.

“But really,” I said, “Just 400 years ago – which is nothing in time terms – people were living in mud huts in Britain. If you brought someone from 1613 to here, they’d have no idea what was going on.”

“Yes,” I said. “Wasn’t it the US Agriculture Secretary who got sacked for saying people just want a tight pussy, loose shoes and a warm place to shit? There was some racism involved too but remove the racism and he has a point.”

“Will we live any longer?” asked Martin.

“I saw this TV programme by Kate Humble,” said Martin, “and she went to this part of Afghanistan where the average life expectancy is 35 years and, of course, their life is fucking hard. But that’s what I think life is. I mean, in Sex and The City, they’re moaning because they haven’t got the right boyfriend and can’t find the right shoes and they’ll live to 90 and they’ll spend the last part after they’re 60 bitter. Wouldn’t it just be better to burn out in glory and respect by the age of 35? It’s better to have a good life than a long life.”

“Yes,” I agreed. “There was that Greek myth about the wife who asked the Gods to give her husband eternal life and, of course, she found out that was the wrong thing to ask for. She actually wanted eternal youth, not eternal life. Eternal life would be appalling.”

“And that American sci-fi series,” said Martin. “The famous episode where there was a third-rate comedian who sold his soul to the Devil. He said I just want everyone to laugh at me all the time and, of course, he went out and someone was stabbed and he got blamed and everyone was laughing at him Oh! That’s so funny, man! and he got sentenced to death and executed in the electric chair and everyone was laughing Hahaha! What a way to go out! Now that’s what I call a funny man!”

“Life’s constantly getting better,” I said.

“Most of the guys who sell me my food,” said Martin, “are orphans from foreign countries.”

“Also,” said Martin “there was a line in The Wire – though all these things we quote we don’t know if they’re true – that literacy levels are worse in downtown Baltimore than in central Africa.”

“But centuries ago,” I said, “everywhere was shit. Now some places aren’t shit. I imagine the Central African Republic is as bad as it ever was, but Manhattan isn’t as bad as it was.”

Martin then opened the back window of his living room and pulled a beer from the refrigerator which he keeps outside.

“It’s OK,” I said. “You got drunk and I got my blog and you’re sitting here accumulating money even as we speak…”

“The value of your house has probably gone up by £10,000 in the last ten minutes,” I said. “This is Peckham. Things are getting better all the time.”