This blog was supposed to be posted on 1st April, until I realised there might be a credibility problem if I posted it on that date.

I had a chat with Pete Perke aka Pete Sinclair aka Pete Cunningham aka Tom Mones aka Frank Sanazi. Frank Sanazi sings like Frank Sinatra but looks like Adolf Hitler.

“So,” I said to Pete,  “you are going over to Austria as Frank Sanazi to celebrate Hitler’s birthday.”

“Well,” he said, “Kulture Banane,  the Austrian boylesque troupe, have become massive in Austria and have asked me to go over and do my show Das Vegas Nights (Zis Time We Win) on 18th April, two days before Hitler’s birthday. Actually, I only recently realised that Hitler was born on 20th April, which is Aries. That would make him a genuine Arian.”

“Well,” said Pete, “one of the guys – he could be a woman for all I know – performs a hijab act which is basically strip burlesque.”

“You’ve played Frank Sanazi in Berlin, haven’t you?” I asked.

“How do they react?”

“The first time I did it, the crowd were a bit…”

“Well, I was told they loved it, but you can never tell with German audiences. There’s not laugh-out-loud vocal appreciation. When I play to an older crowd in Germany, they can be uncomfortable-squirmy a bit, but the young crowd just find it hilarious. Time has moved on so much they don’t feel part of anything their forefathers did.” 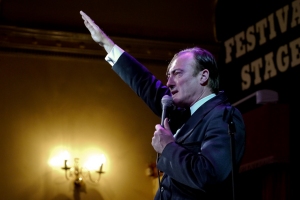 “I suppose Hitler will never die,” I said. “Malcolm Hardee and I booked The Rockin’ Gorbachev on a couple of TV shows and, of course, his career died when Gorbachev got ousted. But you’re not just a one character act.”

“Yes, I’ve diversified,” said Pete. “I do a lot of straight singing and I have Frank Sanazi and Tom Mones (an old Tom Jones).”

“How is your Vladimir Putin act doing?” I asked.

“I’m not sure if he has legs,” said Pete. “Putin is still very ‘in’ at the moment. As long as he keeps in the spotlight, I’m OK. At the moment, I sing Ukranian Men (to the tune It’s Raining Men) But Crimea River (Cry Me a River) is an obvious follow-up. And then there’s Putin on The Blitz (Putting On The Ritz).”

“Are you doing him at the Edinburgh Fringe this year?” I asked.

“No,” said Pete. “This year I’ve got the Voodoo Rooms to take my whole Iraq Pack show. I’ve got Pete Storm playing Dean Stalin (Stalin singing like Dean Martin) and I’ve written a great song for George who’s going to play Osama Bing Crosby and Saddami Davis Jnr is singing Arranged Marriage to the tune of Love and Marriage:

“I wrote a new song recently for Osama Bing Crosby. He said he needed a song on his own because we were just doing a duet:

I have heard to the Taliban
You are now a forgotten man
Well, dead Jew ever
What a swell party this is

How unlucky can one guy be
They shot her, then they shot me
Like the New York Times said
Ain’t that a shot in the head?

“I’ve never,” I said, “heard you ever talk about getting bad reactions from audiences.”

A singing Hitler – apparently less offensive than a dead Elvis

“I used to do an act called Dead Elvis,” Pete told me. “I used to come out of this coffin in a mask with worm holes cut out and I did send-up songs: Are You Hungry Tonight? (Are You Lonesome Tonight)… and The Burgers Went Straight To My Heart… those sort of songs. And I got more stick for doing that than I ever have for Frank Sanazi. Because people love Elvis so much they treat him like Jesus. I stopped doing that act because I was getting so much grief for it.”

“And you’re trend-proof,” I said. “because you play the comedy circuit, the cabaret circuit and the fetish circuit.”

“Yes,” said Pete. “There’s a Festival of Sins show this Saturday, a new fetish night. It ran before, five years ago. It was always overshadowed by the Torture Garden but Festival of Sins was possibly the second biggest in London – run by a guy called David de Vynél and he’s re-kickstarting it. It went tits-up when he married the woman he ran it with.”

There is a clip on Vimeo from the Festival of Sins show in 2010.

“I performed at his wedding and the wedding cake was an entire woman just covered in cake: you had to eat the cake off the top of her. It was very well-presented. This guy turned up – the best man – completely stark bollock naked. All he wore were a couple of little bits of tinsel round his penis and a couple of baubles for balls. And he had a massive dong – I think that’s why he went round naked.”

“Just to annoy people?” I asked.

“I went to one Torture Garden years ago,” I said. “I blogged about it.”

“I remember one Torture Garden,” said Pete, “where there was a guy in a cage and he had a Superman-style cape on and nothing else and he was peeing on people as they walked past. The other thing they had was like an iron lung from Barbarella with perspex over it, so you could put your hands in the gloves and feel whoever it was inside.

“And you know those things they have in Post Offices? Big thick latex things that hang down. I think they do it for health & hygiene. They have them in abattoirs – almost see-through plastic that you can push our way through…”

“Your local Post Office,” I said, “is more interesting than mine.”

“Well,” said Pete, “they had these people just chopping meat up. They had carcasses of sheep. I don’t know how they got away with that, because blood was spattering over everybody as they were going through.

“A couple came in when I was performing- I only knew they were a man and woman because of their size and shape. They had full Nazi outfits on and full gimps masks with zips so you could just see their eyes. They sat right in front of the stage when I performed, watched me for about 25 minutes, then stood up, clapped their gloves together and walked out. It was the most surreal thing.”

“Who else is on the bill with you for the Hitler birthday gig?” I asked.

“Jesus Christ is flying over from Glasgow,” said Pete.

There is a clip on YouTube of Frank Sanazi singing Strangers On My Flight.