Chris Dangerfield had afternoon tea with me

What do you do if people start calling you a Nazi?

Well, if you are Chris Dangerfield, you send me an email and suggest I write a blog about it.

What do you do if you have a heroin habit and want to stop?

Well, if you are Chris Dangerfield, you go to Thailand and live in a brothel for a while. He has done it before.

“So,” Chris told me when we met two days ago, “I went to Thailand for eight weeks and did my Thai brothel detox.”

“Is this the third time?” I asked.

“Well, I done it four times. First two times was mild: a little codeine, a little Valium problem. So I go out there, nip it in the bud. And I nipped a few in the bud while I was there, I can assure you. I deflowered many.”

“No. You can,” Chris told me, “Use anything. I don’t give a fuck any more. I’m done with humans. This is ‘next stage’ Dangerfield… Second time I went out there, I had almost a proper mild smack habit…”

“Chris,” I told him, “you have never had a MILD smack habit.”

“No, no,” he insisted, “it takes a while for me to get back in properly. That second time I thought: Nip it in the bud again. But the third time, yes. Big smack habit. Wall climbing, black foam coming out of my arse, the full…”

I interrupted him: “Black foam coming out of your arse?”

“Yeah. Smack really fucks up your gastro intestinal tracts. Some literal and figurative and metaphorical dark stuff comes out. But this time, man, new level. I’d been using a lot for the last four years.”

“About three weeks ago. But I’m going to go back out there in a couple of weeks.”

“The same brothel on all four occasions?” I asked.

“The same madam. Different locations, because her enterprise is growing. She was a streetwalker when I first met her.”

“So you,” I asked, “have made that woman the entrepreneurial success she is today?” 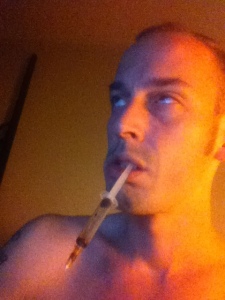 A Chris selfie taken in Thailand back in 2014

“A part of me likes to think that when, weirdly, the truth is she saved my life at least twice. An amazing woman. She instructs all her girls – about 40 of them spread over the three shops. All the working girls come from Isan, north east Thailand. They all speak Thai, but Lao is their first language. In Isan, they are working in fields or factories for 10-20 baht a day. In Patong, they’ll take 6,000 baht a day. What would you do?”

“So you are totally clean now?” I asked.

“I like you, Fleming, because comedians read your stuff.”

“People keep calling me a Nazi.”

“Well,” I said, “you do seem to have decided to go Breitbart and become a British Steve Bannon. Anti-Islamic and all those things.”

“You can’t attack Islam en masse,” I suggested. “For a start, there’s Sunni and Shi’ite.”

“There’s kind-of one set of books, though,” countered Chris. “The Hadith, the Sunnah and the Koran.”

“But,” I said, “there’s only one lot that want to chop our heads off.”

“Alright then, I’m anti-Sunni,” said Chris. “I’m anti-Sunni and I’m anti-Wahhabi. But, hold on, how does me being anti-theist make me a Nazi?”

“Who’s saying this anyway?” I asked.

“Comedians,” said Chris. “Where do they get that from? I went out to the French House (pub in Soho) the other night. People I’ve known for twenty years. Five of them called me a Nazi!”

“Well, this is my point. If you’re not sort of militant Left now, there’s only one option left for you. You get called a Nazi.”

“Your postings,” I said, “do sound like you’ve gone a bit Alt-Right, whatever that means.”

“It means white supremacist. You’ve just casually called me a supremacist, a separatist! I’m not!”

“What is a conservative Marxist?” I asked.

“I’m not a conservative Marxist. But I was Marxist for most of my adult life from about the age of 19.”

“Do you not think,” I asked, “that it’s a circle? If you take extreme Left wing and extreme Right wing, they end up in the same place?”

“So what happens,” I asked, “in the gap of the horseshoe?”

“I just think it’s strange I get this accusation. I get it a lot.”

“I have to admit,” I told him, “that I’ve not read the Koran. But most religions are OK. It’s organised religions – churches – that are often a bad thing, not religions.”

“You haven’t read the Koran,” said Chris. “You can’t go more than three pages without it telling you how to torture and kill infidels. It’s a vile, barbaric book.”

“What you are saying,” I told him, “is not going to look good in print.”

“So how are you going to persuade people you are not an Alt-Right neo-Nazi?

“I’m not. I don’t give a fuck about what they think, really, I will carry on putting Pepe memes up so they think I am.” 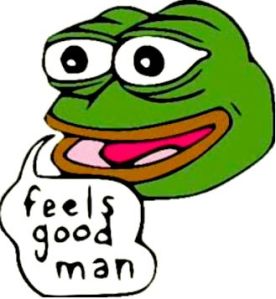 “You have got to include a picture of Pepe in the blog,”

“Are you sure you are off the smack?” I asked.

“Don’t you understand,” said Chris, “that Kekistani meme magic won Donald Trump the election? He was the chosen one of the Kekistani people.”

“I thought that was Tim Berners-Lee. Or the Web, anyway. What is 4Chan?”

“It’s an image board. It’s very famous, John. Tim Berners-Lee invented the internet but these people invented the content. They weaponised autism.”

“It’s how people on 4Chan track people down.”

“What do you do all day, John?

“I fantasise about Lewis Schaffer becoming a mainstream success.”

“Well, there’s a militant anarcho-communist violent – I dunno what you’d call ‘em – gaggle of cunts? They protest anything that they think is Nazism and Fascism. They ‘bash Fash’. That’s why they call it. They bash Fash. They’re middle class idiots and they turn up with banners and sticks and they’ve been smashing up property in Berkeley, de-platforming speakers and all that. But the other day they got the shit kicked out of them at a Patriots’ Day Rally in Berkeley.”

“Are you trying to shut down Islamic free speech?” I asked.

“There is no Islamic free speech,” said Chris. “It’s a religion. Come on, I’m not trying to shut down anyone; I’m trying to keep free speech alive.”

“Who are you going to be voting for in the (UK) General Election?” I asked.

“Oh, Tory. I will be taking a photo of that ballot paper and sticking it on Facebook with a big Up Yours and a picture of Pepe.”

“Have you always voted Conservative?”

“If you were a Marxist earlier in life, you couldn’t really vote Labour back then, could you?”

“Didn’t vote,” said Chris. “When you want an armed revolution, voting for Tony Blair doesn’t really cut it. I am not a Tory, though.”

“So why will you be voting Conservative?” 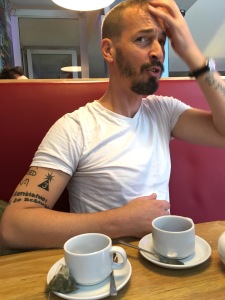 “I’ve probably made myself look a lot worse”

“I don’t want a Socialist in my fucking country. They’re incompetent. There are literal Rivers of Blood behind Communism that make the Nazis look like a flash in the pan. We are talking hundreds of millions of people die when inevitably Socialist/Communist states become dictatorships and then everyone gets murdered and starved.”

“If they want to bash Fash,” suggested Chris, “they should be punching themselves in the face.”

“So,” I said, “you called me in to the middle of London to make yourself look better…”

“I think I’ve probably made myself look a lot worse, though, haven’t I?” Chris laughed.