Who sees comic Lewis Schaffer’s shows repeatedly? Well, one is a green woman. 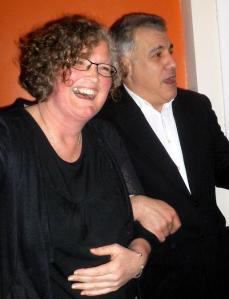 “I would definitely say I’m green,” Blanche Cameron told me.

“Yes,” she replied, “and, on dark nights or under stress, I do get very cross about things.”

My blog yesterday was about the endlessly fascinating – because arguably neurotic – London-based American comedian Lewis Schaffer. But his audience is almost as interesting and varied as his shows are – and he has an unusually large percentage of people repeatedly coming back to see his Free Until Famous show which has been running at least twice weekly since 2009.

Blanche is a recent convert.

“Why bother to come back?” I asked her this week.

“Well,” she explained, “because, very often with stand-up, a lot of people have got a very structured set-up for themselves. It can be so constricting watching it sometimes. You just feel like it’s a tour guide taking you through a bunch of jokes. But, with Lewis, you’re on a cliff-edge the whole time and it could go horribly wrong. He develops a close relationship with each audience. The show is always different. But he also chooses material on the edge of what might be deemed acceptable and provokes a strong response. I love that because feelings, vulnerability, are still a big taboo. Lewis is happy to embrace discomfort and vulnerability and see what happens.”

“But you don’t want to perform yourself?” I asked.

“So,” I asked, “when you were 14 in school did you just sit there thinking I want to be green?”

The National Theatre – It is not my favourite London building

“No,” replied Blanche, “I thought I want to do theatre. I worked at the National Theatre for a while as a set painter. When I was growing up, I had done a lot of amateur dramatics, but I always wanted to do backstage stuff: set making and set painting. I worked at the Hexagon Theatre in Reading as a ‘follow spot’ (a spotlight operator). I once shone a light on Harry Enfield.

“The first time I did it, when I was about 17, they put me on something not too complicated to try me out. There was a waltz troupe from Austria. I had headphones on and they said they were going left – meaning stage left but my right – so I went the wrong way with the spotlight and the pair doing their waltz fell over in the darkness and I had to try to find them again with the light. They were very pissed-off afterwards.

Bosco Verticale (Vertical Forest) under construction in Milan. It will host 900 trees. Designed (and photo by) Boeri Studio

“Then I did a workshop with Forkbeard Fantasy in the 1980s and they told me If you want to get involved in community architecture, you want to talk to Jim Monaghan. He set up the Covent Garden Community Association in the 1970s, so I ended up working there for a year and a half running it aged 18 because, when I turned up, the two women running it went Great! and went off to have babies.

“I had no idea what I was doing, but it was an open door opportunity. Best experience of my life. We ran a newspaper called the Covent Garden Independent News which was a bit Private Eye-ish.

“I loved drawing and making stuff so I thought Maybe I’ll do architecture. So I went to the Charles Rennie Mackintosh School in Glasgow. But I’m not cut out to be an architect. It’s actually quite dull. Well, it is for me. The two guys who ran the school were very modernist. They were into Le Corbusier and big concrete white blocks and I was all greeny and had spent my childhood going out birdwatching. I struggle because I’m not an aesthetic person and maybe that’s why I’m not an architect.”

“I don’t do anything,” said Blanche. “I’m not an architect, a developer or a planner or anything myself, but I’m involved in green architecture. I advocate for ecological adaptation, I teach environmental design at the Bartlett School of Architecture, University College London, the Centre for Alternative Technology in Machynlleth and a couple of other universities, but I am NOT an architect. I don’t care too much about aesthetics. I do to an extent. I think the Gherkin is a very elegant building; it’s like a Fabergé egg. I’m not an architect, but I’m interested in what buildings do.

“The cities we have built are not fit for purpose. There’s lots of beautiful things about them, but they over-heat, they pollute, they can’t manage storm water. If you get a downpour in the summer, the streets flood. Victoria station closes several times a year because really heavy rain can’t be managed by the Underground system.

“I would like to see us working more with Nature rather than fighting against it. We’ve had this idea that cities are separate from the countryside and we’ve separated them from the benefits we can get from Nature, which could reduce costs, cool a city and make it livable. Last summer, in the heatwave, hospital wards were being evacuated – the top two floors – because of over-heating. That costs a Health Trust millions of pounds.”

“Because it’s a hot day and their insulation and air conditioning can’t cope with it. But, if you put a green roof on that with a decent depth of substrate…”

“No. People often think it’s grass or a horticultural thing, but what you want is bio-diversity. A low maintenance roof. Something that’s mimicking nature like a chalk grassland, like a wild hillside. You don’t have to go out and compost and maintain it. Not a rocky, bare landscape, but lots of plants and invertebrates on it.”

“What happens when it rains?”

Transport for London’s biodiverse green roof on its HQ in Victoria. Designed by Dusty Gedge of Green Roof Consultancy

“It absorbs moisture and, when it rains, it re-evaporates 40% of the rain so you’re reducing what goes into the sewer system by almost half and you’re alleviating the burden on the drains. And then you get the cooling effect. It’s cooling the neighbourhood because it’s evaporating. It’s cooling the building. And it can help filter the air, make it less polluted. A green roof does the job and it’s invisible. It’s a multi-functional intelligent solution to a lot of problems.”

“What about people having to mow the grass on the roofs?” I asked.

“You don’t have to. What you want is bio-diversity where the plants manage their own community.”

“I have read Day of The Triffids,” I said. “They might plot against us.”

“There’s no grass,” said Blanche. “If it’s well designed, you shouldn’t have to maintain it more than a couple of times a year: just go up there and see how it’s doing. Water is going to be the issue of the 21st century.”

“Nor in Wales,” agreed Blanche. “I’ve worked at the Centre for Alternative Technology in Machynlleth. But, if you look where the wall built by the Israelis between Israel and Palestine actually goes, it follows underground aquifers. It has nothing to do with religion or even territory. That wall is there to protect the water on the Israeli side of the wall, because Israel imports tens of thousands of gallons of water from Turkey every day. Water is going to be a major issue. Water is life.”

“Not so much,” said Blanche. “One of the problems with the environment movement has been – though it’s less so now – that the Greenies thought We have the Holy Grail. Everyone should come to us. We know the solutions. But, unless you are a vegan living in a cave up a hill, you also participate in the same mainstream society as everybody else. You’re just kidding yourself if you think you’re not.

“I work a lot with two guys – Dusty Gedge who wrote the London policy plan for sustainables and Gary Grant who’s an ecologist who designed the bio-diversity action plan for the 2012 Olympics. They’re doing the green roof on the Tate Modern extension and advising on the green roof for the South Bank re-construction. It is now in the Greater London Authority’s documents that the Mayor expects to see green roofs and walls integrated into buildings and developments wherever possible. Things are changing.”

And how is this relevant to Lewis Schaffer you, my dear reader, might ask?

Did I say it was?

I worry more about the invertebrates on the roof and the potential plots of the Triffids.

There is a 50 second time-lapse video on Vimeo of greenery being built into the wall of the Rubens Hotel in Victoria, London. (Designed by Gary Grant of the Green Roof Consultancy.)