Racism, farting and the Daily Mail in/out of Edinburgh Fringe 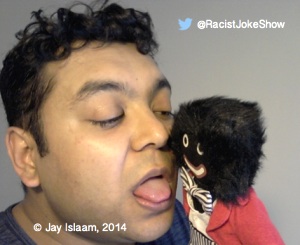 In yesterday’s blog, I wrote about how comedian Jay Islaam’s cunning stunt at the Edinburgh Fringe went slightly wrong. Publicising his Racist Joke Show led to it being cancelled.

After I posted my blog, he told me more:

“The whole show from title to poster to planned flyering was going to be deliberately provocative. It is a shame I could not do my cunning stunt for the flyering. The plan was to have me dressed as a slave master, holding a whip and a chain that went around the neck of a (paid) white flyerer ‘slave’, who would be in blackface (but not blacked up anywhere else) and I would drag them around the Royal Mile overseeing them handing out my flyers. They would shout Racist Joke Show meekly at people passing by and I would berate them with the phrase Louder again and again before whipping them. Maybe next year…”

Flyering is an overlooked vital art at the Fringe.

This year, two of the three nominees for the increasingly prestigious Malcolm Hardee Comedy Awards are for flyering stunts. 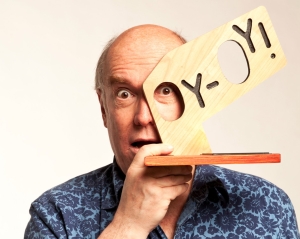 Meanwhile I am still looking for plagues of locusts on the horizon. Their scouts have been steadily arriving.

“To lose ONE sound techie…” as Oscar Wilde might have said if he had ever played the Edinburgh Fringe in August.

Anyway, I have lost my third sound techie. Around three o’clock yesterday afternoon, I got the message:

“One of my Fringe acts has been offered a space for a late show on the 22nd and I am contractually obligated to tech for them. This means that I can no longer tech for the Awards. I can only apologise for the short notice and the inconvenience this may cause you – I am afraid there is nothing I can do as they are paying me under the assumption that I stick to the contact I signed before the Fringe and we were only informed of the slot time an hour ago.”

Which is fine – although a sign that not just swarms of locusts but plagues of frogs may be imminent.

Also leading on from yesterday’s blog, I got another e-mail from my farter chum Mr Methane. 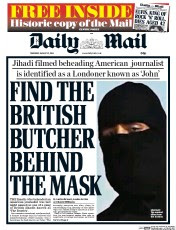 Yesterday, he shared a message he received from an advertising agency encouraging him to take out an ad in the online version of the Daily Mail – which has a readership surely not known for their love of speciality fart acts. They are more into Michael McIntyre, a very fine act whom I much admire but who is not known for farting darts from his bottom at balloons attached to people’s heads.

In response to the advertising agency’s e-mail, Mr Methane had written back:

“I am sure Paul Dacre (the Mail’s editor) and his readers would love not to see an advert for Mr Methane ‘The Worlds Only Performing Flatulist’ on the Daily Mail website. I am just not their bag and they are not my customers either. So thanks but no thanks, though it made me chuckle.”

Yesterday, Mr Methane got another e-mail from the unrelenting advertising agency Web Windows.

“They still want my ass in Mail,” he told me. Their e-mail read:

Mr Methane farts a dart at a balloon on a worried man’s head. Is this what Daily Mail readers want to see over their teacake?

I hope you don’t mind me getting in touch again, but I emailed yesterday about a special offer for a banner ad: One month Daily Mail banner campaign just £480.

Did you get a moment to have a look?

I’m around for most of the day, so let me know if it’s of interest – I might even be able to sweeten the deal!

Mr Methane tells me: “I am really everyone’s favourite at the moment. Either that or the economy has never really pulled out of recession.”

Meanwhile, back at the Edinburgh Fringe, I still have slight toothache… Kate Copstick still has her arm in a sling, going “Owww!” if she moves it too much… and comedy actor Brian Simpson, appearing out of his stage persona, was seen in the exclusive Underbelly Abattoir VIP area sitting in an armchair, wearing a silk smoking jacket and puffing on an electronic cigarette like some latter-day Noël Coward.

The world is a strange place.

Edinburgh Fringe: How the banned “Racist Joke Show” was a cunning stunt

Last night at about 8.45pm, I had a half hour snooze. When I woke up, it was 6.55am this morning. Einstein was right. Time warps. Especially at the Edinburgh Fringe. Well, to be honest, most things are odd at the Fringe. 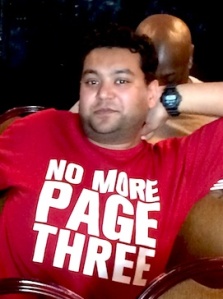 This had been billed as part of the Freestival, the new free show organisation at the Edinburgh Fringe which got a reported £25,000 in sponsorship from La Favorita pizzas matched by £25,000 sponsorship from Arts & Business Scotland.

When Jay Islaam’s Racist Joke Show poster/flyer was brought to their attention, Arts & Business Scotland decided they did not want to have their name associated with the show.

“I have a confession to make,” Jay told us yesterday. “I put out this very provocative poster with just the words RACIST JOKE SHOW – BANNED FROM 100+ VENUES.”

“For a lot of reasons,” he replied.

“And the poster had a golliwog on it,” I said.

Jay and his much-loved golliwog, as seen on his own website

“It was my own personal golliwog,” explained Jay. “But I had no intention of using that on the final poster, though I was thinking of using it on the flyers. It was a publicity stunt. I sent it to the media knowing it would get a reaction.

“(The comedy website) Chortle picked up on the poster and sent it to Arts & Business Scotland, who issued a statement without checking what the show was. I won’t comment on whether that was right or wrong, but that’s what they did.

“On the back of the flyer, it asked a series of questions:

“But, sadly, the show did not happen.”

“I know this is racist in itself,” I said, “but surely the name Jay Islaam would imply you are not – let’s say 500 years ago – of white British origin.”

“Well,” said Jay. “this is the thing. Part of the Racist Joke Show was about the fact it should not matter whether you are black or white or Indian if you want to discuss issues of culture or race or religion or sexuality. There should not be restrictions on someone just because they are the ‘wrong’ minority or majority.”

“Your name was on the poster?” I asked.

“No. It was on the back of the flyer – as was my photo – but in tiny writing. I did not want to be given a free pass to do the show because I was part of a minority – because the point is the things that I say about race and religion and sexuality and different types of prejudice should be something that anybody can say because they have a logical basis to them. You should not be censored because you are white or male or Chinese so you can’t talk about Indians. That was the point of not putting my name or picture on the poster.”

“I have never understood the argument,” I said, “that a black person can say the word ‘nigger’ but a white person can’t. The word is either offensive or it is not.”

“This is one of the things I was going to discuss,” said Jay, “and why I was using the golliwog as a symbol. People talk about ‘reclaiming’ offensive words, reclaiming insults like the Americans did with the word ‘Yankee’, which was supposed to be an insult.

“The show was wanting to do the same thing with words like nigger or Paki or Chink. You can say: I am black and I am going to reclaim the word nigger. But, if a white person says it and you are upset by it, then you have not reclaimed it because the word still has power over you. The show was going to be about taking the power away from these words and symbols. 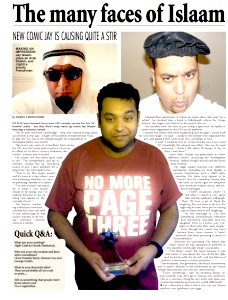 A piece on Jay in this month’s Eastern Eye

“The poster was a blatant publicity stunt using the golliwog, but the upshot was the controversy snowballed to a certain point where the show was cancelled. That was not my intention.

“Hopefully next year I will be able to bring the show to Edinburgh. I have already been asked by some promoters in the North of England if I will come and tour it at their theatres.”

Meanwhile, back in what passes for the real world outside the Edinburgh bubble, this morning (when I eventually woke up) I read an e-mail from my farting chum Mr Methane – the world’s only professional flatulist act – whose company is called BO Productions. Yesterday, he received this e-mail:

This is the first time I’ve been in touch and I wanted to find out whether you’d be interested in the idea of running a banner ad for B O Productions Limited on the Daily Mail website?

Web Windows is an advertising agency who are occasionally able to pick up some amazing late-availability banners. This is one of those occasions and you can find all the details of the offer on this link: One month Daily Mail banner campaign just £480.

If you’re not sure whether online advertising is right for you we’ve put together a Video Review: Why Online Advertising.

I appreciate this offer has appeared out of the blue, so if you’d like me to explain things in more detail, I can be contacted on the number below. Or maybe you’d just like to go ahead?

It is good to know that the Daily Mail is obviously trying to expand and subtly alter its brand image and thinks its readers would appreciate a banner ad for a farting act and is actively courting Mr Methane. Meanwhile…

In other, more tragic, showbiz news, the increasingly time-constricted Malcolm Hardee Comedy Awards Show on Friday seems increasingly UNlikely to include a string of comedians doing impressions of iconic Lewis Schaffer (though we did try it out to great success at yesterday’s Grouchy Club).

Perhaps our final Grouchy Club show should be devoted (as, of course, we all are) to Lewis Schaffer. 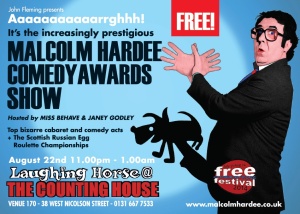 A show or event? Who knows? But it is happening this Friday

There is even worse news, though – I am told by his agent that Jim Davidson is unable to accept my invitation to take part in the Scottish National Russian Egg Roulette Championship during the aforementioned increasingly prestigious Malcolm Hardee Comedy Awards Show this Friday.

I tried my best.

We will just have to soldier on with what we have.

Have we got a show for you?

Well, it is certainly going to be an event.

Now I must go away and figure out a running order.