Edinburgh Fringe: Bob Slayer on being ripped-off and pulling-off another comic

Bob Slayer – a life in performance art both on and off stage?

In her place was comedian, promoter and Malcolm Hardee Cunning Stunt Award winner Bob Slayer, a man of a thousand hats. The previous day, Bob had sent a text message to me, Kate Copstick and others saying: “I’ve had a creative breakthrough – I’m not a comedian. I’m a performance artist.”

Among the audience at The Grouchy Club yesterday was Stuart Richards, who is staging LaughDance at the Fringe.

“It’s stand-up set to dance,” he explained. “It’s basically a stand-up comedy show. Each comic comes out and does their ten or fifteen minutes and we have four professional dancers behind who interpret the comedian’s set. For example, we have comedian Tim Renkow, who has cerebral palsy, and he tells a story about getting into a fight with a neo-Nazi while, in the background, we have two dancers doing Brazilian martial arts dancing.”

“That’s exactly the schtick that Tim takes,” said Stuart. “He starts screaming at them.”

“What do you do between Fringes?” a shrewd member of the audience asked.

“My day job,” said Stuart, “is a development producer with a TV company.”

“All development producers do,” said Bob, “is try to not get anything commissioned, because then they would be putting their head above the parapet… I have an idea… Fat Jockeys…

“I used to be a jockey. Me and another ex-jockey who is the right height, but round… We have a bet who was the best jockey and the only way to settle it is to lose weight, get fit and have one last race.”

“There’s definitely something in that,” said Stuart.

“With each element,” said Bob, “you can have little side bets like Who has lost the most sweat?”

“Basically,” said Stuart, “at the end of the week, you only get to ride if you have lost enough weight – otherwise the horse will buckle.”

“We could go for liposuction,” suggested Bob, “and see who will make the biggest body fat candle… This idea – Fat Jockeys – has been ‘in development’ twice.

“TV people love the idea of Fat Jockeys then, six months down the development line, they say: Oh, we need to attach a celebrity to it. This happened and I said: Great! Lee Mack used to be a jockey. He looked after Red Rum. Johnny Vegas loves horse racing… And they said: Yeees… We were thinking Jeremy Kyle. Apparently he owns horses and likes horse racing. Clare Balding was interested in it.” 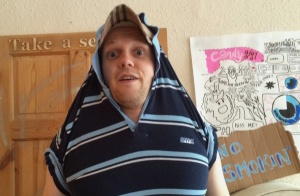 “Can you tell the Devvo story?” I asked. “Or is that actionable?”

“Now,” said Bob, “we are getting onto my REAL beef with TV development producers. Devvo had a development deal about five years ago, first with Channel 4, then with the BBC.

“He had millions and millions of views online pre-YouTube and, when YouTube came along, he was one of the first YouTube stars.

There is an E4 video of Devvo on YouTube:

“The development people all said: We love Devvo. He’s not just someone dressed-up as a chav doing two-dimensional jokes. He inhabits his world; it’s not just crappy one-liners ridiculing chav culture.

“We did all sorts of bits of TV and then the BBC said: Can we put a laughter track on it? And we said: Well, no. The whole thing is it inhabits a real world. Then, a bit later, they asked: What’s his real name? They basically wanted to say THIS IS A CHARACTER … No!… The whole thing is it’s real.

“Then we got an e-mail – not even a phone call – saying he wasn’t going to be in this show and, when it was screened, who was in it? Lee Nelson, who was just somebody dressed up as a chav doing horrible jokes about chavs and he then went on and had Devvo’s career. I didn’t blame him so much, it’s just bloody TV producers! They wanted to commission Devvo but then they got cold feet.”

After the Grouchy Club show, Bob and I bumped into comedian Jeff Leach.

At the end of yesterday’s blog, I mentioned being told that the phrase John Fleming’s spunk in her eye featured in Jeff’s late-night rap battle against Sofie Hagen. Feigning shock, I wrote: All I know is that I feel soiled. Desperately soiled.

Jeff, apparently, was worried I had seriously been offended and had sent me an amiably soothing e-mail.

“Ah, Jeff Leach!” said Bob when we bumped into him. “I once wanked him off in a venue very near here, because he was dying on stage and the promoter said: Bob, can you pull him off stage. And all I heard were the words Pull him off. But whenever I tell this story, Jeff says: I wasn’t dying. I wasn’t dying.”

“What happened,” said Jeff pleasantly, “was I was on stage…”

“We used to have a friendship,” said Bob pleasantly.

“But then,” said Jeff pleasantly, “I heard some terrible things about you and I decided I didn’t want to be friends with a man who makes women feel that uncomfortable… So… what actually happened was I was on stage and Bob was very drunk and loud and obnoxious at the back and I said: Oh, Bob wants to be part of the show. So I said: Come up here and Bob thinks he’s a very shocking comedian; he’s always going to take it a step too far. So I said: Get yer cock out and he did, so I got my cock out and I grabbed his and he grabbed mine. That’s what happened. And I did not win the Malcolm Hardee Award despite doing that.”

“I love,” said Bob pleasantly, “how you’ve changed that version to put you in the centre.”

“Of course,” said Jeff pleasantly, “because I was the one booked to perform that night.”

“I was on after you,” said Bob pleasantly “I had to clean up the mess. What was interesting was the guy in that show whose face we wanked into – it was his first day at the Fringe and, this year, he’s doing the world record for the most shows at the Fringe. He’s seen 128 shows so far and I think he’s just looking for something near that first experience.”

“He’s never going to get it,” said Jeff.

“Has he been to see your show yet?” asked Bob.

“I think you’ll find he hasn’t,” said Bob pleasantly. “Because you were dying on stage that night and he didn’t like you much and he thought I was very funny.”

“I don’t have to respond to anything that comes from Bob Slayer,” said Jeff pleasantly. “You ARE Bob Slayer; you are, in a sense, a walking piece of art.”

Expect a TV development deal soon for Bob Slayer and Jeff Leach in a reality show.

At The Grouchy Club, Copstick let rip at ‘right on’ comedians

At the daily Grouchy Club, my co-host Kate Copstick and I try to know our audience. Sometimes we already know them.

“Who is this gent in the front row?” I asked yesterday.

“This gent,” Copstick told me, “is the reason I am here. This is Robert Dawson Scott who, in 1999, was Arts Editor of The Scotsman and he gave me my job as a critic.”

Later, Copstick asked: “Has anyone been to see Jim Davidson?”

“I’m going to Jim Davidson’s Funeral on Tuesday,” I said.

“There is a double act called Ellis & Rose,” Copstick explained to the audience. “They phoned me today..”

In the Fringe Programme, Jim Davidson’s show and the spoof funeral show are next to each other

“They’re doing a one-off show,” Copstick continued, “called Jim Davdson’s Funeral, which one cannot help but feel is going to be a bit anti-Jim Davidson. They wanted to invite him to The Grouchy Club tomorrow and ‘have a heated debate’. But I don’t really see why Jim Davidson would want to come here considering that, whatever he is offstage, he is technically a brilliant comedian.

“It really irritates me when a lot of baby-boy comics and – even worse – baby-harridan comics get up on their hind legs to criticise him when they are doing –  supposedly ironically – quite a lot of racist, sexist stuff themselves. They are just dressing it up and he doesn’t. I don’t think I’d laugh like a drain if I went and saw his show, but I really… It’s a horrible… It’s… Look, I interviewed Richard Herring and he said that the very first time he came up to the Fringe was in 1987, right at the height of the alternative comedy ‘We Hate Thatcher’ mood.

The Young Herring (left) went to Edinburgh with Stewart Lee

“Richard was really excited. It was his first time ever in Edinburgh and all these comics were listed as being here who were his idols and whom he loved.

“But, for the whole first week, every time they went on stage, there was a contingent of alternative comics heckling and booing them. One time, Keith Allen completely disrupted the show and ended up punching the theatre manager in the face.

“I think there still is a kind of Fascism in comedy that thinks We are the right-thinking ones! You are bad!”

At this point, Malcolm Hardee Comedy Show helper Stephen O’Donnell suggested from the audience: “Some old comics get to re-invent themselves but, maybe because of what’s happened with him in the last ten years, Jim Davidson might be beyond that possible re-invention. You have to go away to come back and, because he has been newsworthy in the last five years, he is not really able to go away and come back. So he really just has to go on and show he can do what he does.”

“Also,” said Robert Dawson Scott, “he’s made it difficult for himself because, before the arrest and all that stuff, he very clearly positioned himself as ‘not alternative’. He thought they were not funny and he was rude about them. He may have some bridges to build.

“I gather,” he continued, “that most of his show is about being arrested, which is why it’s called No Further Action. Clearly it was an unpleasant experience – although possibly comedy gold.”

“And,” said Copstick, “if somebody else had been doing it, everybody would be going Yah! The police are terrible! But, because it’s Jim Davidson, they go: Oh, there’s no smoke without fire.”

Richard Gadd recognised Copstick and Steve and, in a show of bravery, sat them in the front row. I sat with them. It must have been a comic’s worst nightmare in the small venue: performing at times only about 18 inches away from the two most-read reviewers in British comedy… and a fat, bald bloke who was clearly a bit too old for a comedy show.

Towards the end, Richard Gadd started eating the heads off flowers.

After the show, Copstick said to me: “It’s a bit dangerous eating flowers. Some can be poisonous.”

“He’s probably researched it is OK to eat those particular ones,” I suggested. Then I thought about Richard Gadd’s show. “Maybe not,” I added.

I went to bed early last night – early for Edinburgh – just before 2.00am.

At 1.56am, I got a text from Heather Stevens, the primus inter pares of comedian Lewis Schaffer’s entourage. Heather is a woman who seems to know everyone and to be everywhere at this year’s Fringe. Her text said simply:

All I know is that I feel soiled. Desperately soiled.