Yesterday morning, I was sitting in my friend’s house just outside Milan. There was a ring on the bell at the gate.

“It’ll be the missionaries.”

In fact, it was a man handing out the latest issue of the local revolutionary Communist party newspaper Lotta Communista (The Communist Fight).

“Are the Communists strong around here?” I asked.

“They used to be,” I was told. “There is a new Morman Temple opening round the corner, maybe this year.”

Religions seem to be finding Italy a fertile ground. Always have, I suppose.

In the afternoon, I went to the hilltop town of Bergamo with my friends. There were a group of perhaps twelve young schoolgirls going round one of the squares, asking people to wear a pink jacket and then taking photographs of them.

“Why the pink jacket?” I asked the schoolgirls.

“We are all from different schools,” I was told, “but we all come from Belgium. You go to a camp and you meet people and you do stuff for them. we are at Camp Lovere. It is a water camp. We do water sports there.”

“And the pink jacket?” I asked.

“It’s a game that we play in the city,” I was told. “We are in different groups, all battling against each other. There are other groups who have to make sure people wear pants… like swimming shorts. We have to get pictures of things and we also have to collect some Italian food and create a human pyramid. And we have to teach a tap dance to somebody and to wrap someone – an Italian – in toilet paper and take a picture.” 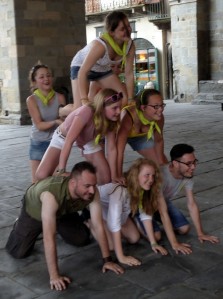 They rushed across the square. Two men were persuaded to kneel on all fours on the ground and six girls formed a human pyramid with them.

As we were driving out of town, my friend saw two greyhounds.

“They are lovely,” my friend said. “There is an Italian association which rescues greyhounds from Irish racetracks. Did you know the greyhounds get killed after they stop winning races?”

Later, as we ate our evening meal in the garden beside our house, a man started shouting and a woman started screaming in fear in the large house across the road.

I looked at my friend.

“He is shouting at her I will kill you! and she is screaming. It does not sound good.”

But the four dogs owned by the man in the house across the road were not barking so, presumably, it was not an unusual occurrence.

I was talking to someone in West Wales today about the Jehovah’s Witnesses, like you do, and the subject of Hank Marvin of The Shadows cropped up.

I don’t know if this is an urban myth, but I have heard it more than once over the years and it has always had the ring of truth about it.

Cliff Richard and The Shadows are famously Christian.

Whenever Cliff Richard and The Shadows toured the UK after that – wherever they performed on a particular Saturday night – every Sunday morning Hank Marvin would go round knocking on people’s doors, carrying copies of The Watchtower and spreading the Word of God.

Quite how mothers of a certain age reacted when they opened the door, bleary-eyed, on a Sunday morning to find their teenage pop idol Hank Marvin asking, “Have you ever thought of giving your life to Jesus?” I cannot imagine.

Well, I CAN imagine it and it gives me warm smiles of happiness whenever I do.

Even more surreal is the story that Frank Zappa apparently said Hank Marvin’s guitar style heavily influenced the first Mothers of Invention album Freak Out! and that guitarist Carlos Santana’s early nickname was ‘Apache’ after The Shadows’ famous tune of that name.