A couple of days ago, I stumbled on the decidedly ropey 1972 film version of Treasure Island on the Movie Mix TV channel. It was produced by Harry Alan Towers.

Now there was a man with a life like a movie plot.

I first heard of him years ago as a prolific and rather shady B-movie producer; I heard some of his films were set up simply to launder money internationally. In its obituary, the Independent said “he acquired a legendary reputation as the most prolific – and occasionally elusive – independent producer in the business.”

He made over 100 quickly-made films. Variety‘s obituary claimed he was “known for his sometimes questionable practices”.

Starting as a child actor, he became head of the RAF radio unit with the British Forces Broadcasting Service then, in 1946, with his mother, started a company called Towers of London which syndicated radio shows around the world. He then started producing film series like the The Adventures of The Scarlet Pimpernel (1956) which he sold to ITV in the UK.

In 1962, he started making feature films in places such as South Africa (under apartheid), Hong Kong, Ireland and Bulgaria. This was when the Cold War was at its height.

He continued producing movies well into his 80s and died in Canada, aged 89, in 2009. At the time of his death, he was working on post-production of a film adaptation of Moll Flanders directed by Ken Russell. 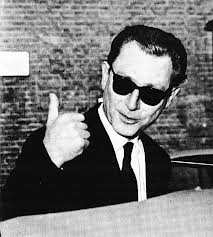 The interesting year in his career is 1960. In February, he was allegedly introduced to Czech-born Mariella Novotny by ‘society osteopath’ Stephen Ward at a party held by American millionaire Huntington Hartford.

According to the November 1983 issue of Lobster magazine:

Maria and Towers didn’t meet at the party, but Towers must have recognised her: four days later a letter arrived suggesting a meeting at Claridges to discuss some possible modelling work. The letter was actually signed by Tower’s mother, Margaret, who Novotny claims had an extraordinary influence over him, and from whom he took his instructions. At the meeting Towers was brisk to the point of rudeness. He told her that he could make her a top television model doing commercials in America. Although she didn’t like Towers, she found it difficult to turn down the contract, which offered upwards of $50,000 a year. Over the next days the contract was sorted out and Maria was introduced to some of Towers’ friends, one of whom tried to have sex with her in Paris. Towers, over the next year, made no sexual advances towards Maria but didn’t mind pushing his friends on her. She signed to Towers’ modelling agency and he gave her a large deposit.

According to Novotny herself, what happened in London was that Towers invited her to his flat to meet his mother and a group of Americans, one of whom – having asked her into another room to speak privately – promptly stripped off his clothes. “I was anxious to do well in New York,” she wrote, “so I shrugged and decided to do whatever was necessary… Neither Towers nor his mother gave any indication of knowing what we had done on our return to the drawing-room.”

Her uncle, President Antonín Novotný, in New York in 1960

Maria (Mariella) Stella Novotny was born in 1941 in Prague. The story goes that her father was brother to the President of Czechoslovakia and they lived in the Royal palace until she was 6 years old. The President supported the Communists, but Maria’s father was actively anti-Communist. The President warned Maria’s father that the Soviets were liable to arrest him and advised him to leave the country. Instead, he joined the underground, making arrangements for Maria to leave the country with a family called Rutter. They escaped in a railway truck hiding under some corn, and crossed the border into Austria.

Unfortunately, they ended up in the Soviet sector where they were put in a displaced persons camp. In 1948, Maria was released, apparently through the efforts of a Mrs Capes, who had known her father when he was a university student in England. Maria went to England, where she lived as the daughter of Mrs Capes. When she became a teenager she went into modelling and was determined to make it into a successful career.

According to Christine Keeler in her 2001 book The Truth at Last, Mariella was born in 1942 London and her real name was Stella Capes but she changed it to Mariella Novotny because it “had a more whiplash ring to it.” After the death of her father, she became a striptease dancer to support her widowed mother and worked as a prostitute in London. Christine Keeler claimed: “She was a siren, a sexual athlete of Olympian proportions – she could do it all. I know. I saw her in action. She knew all the strange pleasures that were wanted and could deliver them.” 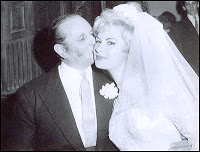 What seems agreed is that, aged 18, Mariella met Horace ‘Hod’ Dibden, aged 57, an expert on English antiques and furniture. They met at his Black Sheep Club in Piccadilly and got married in January 1960. Dibden was a friend of Stephen Ward.

It was Stephen Ward who may have introduced Novotny to Harry Alan Towers at the party in February 1960. He also introduced Towers to Mandy Rice-Davies (this was three years before the Profumo scandal broke).

Horace Dibden and Mariella Novotny held their own parties.

In her autobiography, Mandy (1980), Mandy Rice-Davies described what happened when she arrived at one of these parties in Bayswater:

“The door was opened by Stephen (Ward) – naked except for his socks… All the men were naked, the women naked except for wisps of clothing like suspender belts and stockings. I recognised our host and hostess, Mariella Novotny and her husband Horace Dibbins, and unfortunately I recognised too a fair number of other faces as belonging to people so famous you could not fail to recognise them: a Harley Street gynaecologist, several politicians, including a Cabinet minister of the day, now dead, who, Stephen told us with great glee, had served dinner of roast peacock wearing nothing but a mask and a bow tie instead of a fig leaf.”

Sometime that same year, Harry Alan Towers started an affair with Novotny and promised to get her work in US TV commercials. Towers flew to New York in December 1960, followed by Novotny. She later told a friend that “I wanted to be famous and show my mother that I could make a go of life myself.”

After two weeks in the US, Towers allegedly arranged a lunch for her with actor Peter Lawford, the brother-in-law of soon-to-be President John F Kennedy. She was introduced to Kennedy and later, at a party held by singer Vic Damone, almost immediately shown into a bedroom where she had sex with Kennedy. They were not gone very long before there was a commotion in the main room. Damone’s Asian girlfriend had made an unsuccessful suicide attempt and had been found in the bathroom with her wrists slashed. The apartment quickly emptied. Kennedy disappeared with his bodyguard and his associates and the incident was hushed up.

The quick departure could have had something to do with the fact that, according to Novotny, an FBI man was known to attend these parties.

Novotny being taken into custody by a rather cliché FBI man

On 3rd March 1961, Novotny was arrested by the FBI and charged with soliciting. Three days later, Towers was accused of transporting her from Britain to New York for the purpose of prostitution. It was claimed that Towers ran a call-girl ring at a New York hotel. And a call-girl ring at the UN was also mentioned.

Novotny told the FBI that, in New York, “Towers took me to the Great Northern Hotel… The following afternoon Towers brought a prostitution date to me, who paid me $40 to commit a sexual act. Thereafter I entertained prostitution dates regularly and earned approximately $400 a week. I gave Towers about $300 of this money… Towers was present when prostitution acts were committed.”

In her FBI statement, she also claimed: “Towers was a Soviet agent” responsible for “providing the Russians with information for the purposes of compromising certain prominent individuals”.

On 12th April 1961, Towers appeared before a US grand jury on five counts of violating the White Slave Traffic Act. On 25th April, he pleaded not guilty to all five charges.

By the time his trial was due to begin on 16th May 1961, he had jumped bail and fled back to Britain, then to Eastern Europe (at the height of the Cold War) where he started producing low budget thrillers financed through Liechtenstein and other tax havens.

Novotny returned to running sex parties in London, which were (according to a Guardian article in 2009) “attended by so many senior politicians that she began to refer to herself as the government’s chief whip.” The parties allegedly included British politicians John Profumo and Ernest Marples as well as foreign leaders including (allegedly) Willy Brandt and Ayub Khan.

In 1980, all charges against Towers were dropped after he paid a £4,200 fine for jumping bail.

Mariella Novotny was found dead in her bed in February 1983. Reportedly, “Shortly after her death her house was burgled and all her files and large day-to-day diaries from the early sixties to the seventies were stolen.”