Comedy’s future in London and what is happening in Canada, Japan and Kenya

Last night, I got three interesting e-mails and saw the best potential TV series not yet on TV – Vivienne & Martin Soan’s monthly live comedy show Pull The Other One in South East London.

The PTOO format is bizarre acts plus one token stand-up comedian, which I think might be the next step in the future of comedy in the UK.

Call me obsessed but, with the apparent decline of straight comedy clubs and the rise of the Cabaret Section at the Edinburgh Fringe, something feels likely to change. 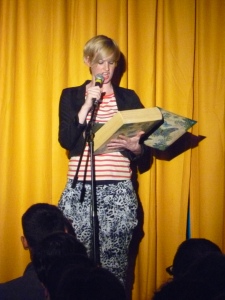 Lindsay Sharman did it by the book last night

Last night at PTOO, the ever-TV-friendly-faced Lindsay Sharman hosted Cheekykita, who harassed the audience in a crash-helmet, then turned into a black hole… wonderfully acerbic (OK – viciously bitter) musical comedian Kate Lucas (who, last month, was crowned Mercury Comedian of the Year at the Leicester Comedy Festival)… the always wonderfully intense Zuma Puma aka Nelly Scott as a wildly OTT Russian colonel… the Greatest Show on Legs with Martin Soan as a psychotic gay sergeant major… Simon Munnery being superbly funny as the token stand-up (You know, when Simon Munnery is the token normal comedian, everything else has to be SERIOUSLY weird!)… and Darren Walsh being extraordinarily punny (last month he won the first UK Pun Championhips) with lots of surreal visual and audio gags meaning he kept well to the bizarre variety act side of normal stand-up. 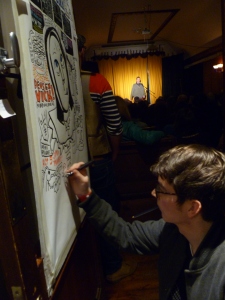 While all this went on, artist Peter Morey was drawing his live visual interpretation of the show on the door of the venue as he listened to the acts perform.

For once in my life, I felt trendy.

Then I went home.

This man is in Vancouver. I do not know him.

There was an unexplained e-mail from this blog’s occasional Canadian correspondent Anna Smith. She is currently working in a bookshop in Vancouver. There was no text in the e-mail, just an attached picture. The e-mail was titled Finns and Doukabors have visited the shop. I have no idea what this means.

According to Wikipedia, the Doukabors were a Russian religious sect who emigrated to Canada in the 19th century to escape persecution by the Tsarist authorities. And, according to the 2001 census, over 131,040 Canadians claim Finnish ancestry.

I have no idea what relevance either of these facts may or may not actually have to anything else.

Then I opened an e-mail from British comedian Bob Slayer who, among many other things, used to be a horse jockey (unlikely but true) and managed Japanese rock band Electric Eel Shock (who are descending on Britain next month).

They provided some of the music for the movie Killer Bitch, in which one of them got killed by having a fish rammed down his throat. One of the movie’s online samplers uses their music. (Do not view this adult material if you can ever be offended by anything and – really – NB do not buy from the website named at the end, only from reputable retailers.)

A week ago, Bob Slayer flew to Japan. I had no idea why. Last night’s e-mail explained:

The reason why we are here is our friends Kaori and Jamie are getting married. Kaori was in a London-based Japanese two-piece band called Yumi Yumi. They both helped me out lots in the early days of managing Electric Eel Shock. After that band, Kaori joined Mercury Award nominated The Go Team as guitarist, keyboardist and occasional vocalist. Jamie was the bass player.

DAY 1 – We arrive in Kumamoto after 24 hours travelling. We took a flight from London to Tokyo then several bullet trains. Some of them were even the right ones. The highlight of the wedding food is a plate of raw horse meat, a local delicacy. I will never watch the Grand National in the same way again.

Day 3 – Where did day 2 disappear? A booze and a jetlag fug?

Day 5 – Today we are in Settsu-shi, near Osaka, at the house of Aki Morimoto otherwise known as front man of Electric Eel Shock. He has produced a little boy since I saw him last and Taira (3 years old) and I bond over sword fighting and cartoons of Anpanman, Japan’s most popular anime for kids, where all the characters have heads made out of different flavoured breads. I also build a 7 foot Lego tower.

Day 6 – Osaka’s speciality food is takoyaki and okonimaki – octopus batter balls and a savoury pancake made with chopped cabbage. Both are covered in mayonnaise and Worcestershire sauce. It seems that, although Japan spent a lot of its history closed off from the outside world, some imports had a big influence 150 years ago. Barbershop poles are red and white and the Japanese word for suit is ‘Savillrow’.

After this, I opened an e-mail from comedy critic Kate Copstick, currently in Kenya. She told me:

Hoping to be boarding a plane to Britain this time next week, barring any intervening ghastliness.

I am on one crutch and reasonably mobile.

All in all it could be worse.

I think – unusually – she may be under-stating the case.

But that is another story.