The Edinburgh Fringe, Malcolm Hardee and the anniversary of the Great Leader 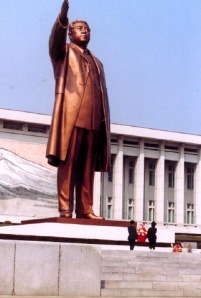 Statue of the Great Leader in Pyongyang

My blog four days ago on the Edinburgh Free Fringe’s unusual, some might say neo-Stalinist, restrictions on its performers did nothing to free the block on one of the long-term members of The Greatest Show on Legs performing at a planned reunion show at the Laughing Horse Free Festival’s Hive venue this August.

Free Fringe originator Peter Buckley Hill is quoted on the Chortle comedy website as saying: “We have done the fairest and the best thing in the 65-year history of the Fringe for performers.  Without us, they’d still be losing thousands of pounds. Let anybody who wants to cast a stone reflect on what they themselves have done to help performers at the Fringe.”

But now, just two days before the final Edinburgh Fringe Programme deadline, I can exclusively reveal (as the best hacks say) that the Greatest Show on Legs performance will go ahead at The Hive with long-time members Martin Soan and Martin ‘Sir Ralph’ Clarke plus – filling in for the unavailable third member – special guests on each of the three planned nights.

The Greatest Show on Legs will be performing at The Hive in Edinburgh on 23rd, 24th and 25th of August which (not coincidentally) means they can also appear during the two-hour Malcolm Hardee Awards Show in the ballroom of The Counting House on 24th August. This year, that show is being put together and hosted by the extraordinary Miss Behave, star of La Soirée and the Olivier Award winning La Clique.

The stand-in guest performers with the Greatest Show on Legs have not been arranged let alone confirmed yet – bloody hell, the booking was only arranged yesterday – but  past stand-in guests for their naked balloon dance have included comedian Simon Munnery, German variety artiste Otto Kuhnle (himself a Malcolm Hardee Award winner) and TV presenter Keith Chegwin.

Me? I am off to North Korea this morning to join in the heartfelt celebrations on 15th April for the 100th birthday of the late Great Leader and Eternal President Kim Il-sung.

North Korea is a fascinating country. But an unfortunate side-effect of my visit is that I will be uncontactable while there and will not be blogging again until 22nd April, when I get back to the UK.