“You were thinking about making a 5-minute science fiction film called Avatar last time I saw you,” I reminded Danish director Nicolai Amter yesterday. “I never told you, but I thought it was a very uncommercial title.”

“Oh, that was ten years ago or more,” replied Nicolai. “Before the other Avatar or The Matrix or Minority Report came out.”

“So maybe we have not seen each other this century,“ I said.

He and I used to work together at Scandinavian TV channels TV3 and TV1000.

“My Avatar film was back when I still needed a DoP (Director of Photography),” mused Nicolai. “When I went out as a director, standing next to a DoP I often felt I knew as much as he did and I knew exactly the kind of lighting required, but I didn’t know all the camera gear required.

“I started out as a music photographer and then I got into music videos in Copenhagen and then I ended up in TV promotions and now I’m getting back into the whole photography thing because of the new Canon 5D camera – an amazing stills camera which also shoots amazing video.

“When it first came out and I saw a test, I sold all the video equipment I had and bought it and it changed the way I work. It liberated me from needing a DoP on a lot of projects: I can shoot everything myself.”

“So what are your plans now?” I asked.

“Getting some work in London for a change,” Nicolai told me. “It seems every time a job comes up, it’s always back in Africa – in Kenya or Nigeria or Ethiopia or Ghana or Tanzania. I’ve spent so much time in Africa over the last year….”

“The people are very friendly,” said Nicolai. “There were a couple of experiences, but nothing that involved me. They were local misunderstandings between other people, I think. But it did mean I and the camera had to make a hasty retreat back to the car while it got sorted out.”

Nicolai yesterday, at the opening of his exhibition in London

Nicolai and I met again yesterday because I went to the opening day of an exhibition of his at Antenna Studios in London’s Crystal Palace: a series of photos he shot at the Kibera slum in Nairobi, Kenya. It runs until the end of the month.

“People can buy prints of the photographs,” Nicolai told me. And I also have a book.

Any money that comes out of it will go into projects for the people living in the slum.

Kibera is reportedly Africa’s largest urban slum. A census in 2009 found it housed 170,070 people. A railway line runs through the slum, which has its own railway station. The slum is contaminated with human and animal shit, due to the open sewers and what has been called “frequent use of ‘flying toilets’ – people shit in bags and throw them away on the ground. Obviously, Kibera is heavily polluted by this shit, garbage, soot, dust etc.

Somewhat bizarrely, the slum has its own newspaper – the Kibera Journal and its own radio station – Pamoja FM. It even has a film school. 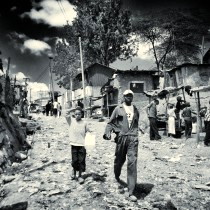 One of Nicolai’s photos of the Kibera slum

One recent report said: “The ground in much of Kibera is literally composed of refuse and rubbish. Dwellings are often constructed atop this unstable ground, and therefore many structures collapse whenever the slum experiences flooding, which it does regularly. This means that even well-constructed buildings are often damaged by the collapse of nearby poorly constructed ones.”

“Why were you in Kibera?” I asked Nicolai.

“My brother is based out in Nairobi,” Nicolai said, “working mainly for the BBC as a freelance journalist. I went out to help him on a film for the BBC Media Trust.

“We were filming there for the BBC and, because my brother had done reports from there before, he knew a guy who lived there who worked as a fixer for the BBC. So I could hook up with him and go back later and walk around.

“At one point, I was walking around with him and all my film gear and we saw these three young girls from some NGO coming towards us with three armed guards. And I thought: Wait a minute! You need three armed guards and I have several thousand pounds worth of equipment here and only one unarmed guy!

Children living alone in their ‘homes’ outside Puno, Peru, 1983

But when I was in Lima, Peru, in the early 1980s, it was clearly one of the armpits of the world.

I could understand why some people supported the extremist-bordering-on-psycho rebels, the Sendero Luminoso Maoist guerrillas.

I wondered why people were apparently flowing into Lima from the countryside to live in the slums. When I went into the countryside and saw the poverty there, I realised why.

Nicolai said to me yesterday: “It seems to me, in Nairobi, there are rich areas with slum areas not very far from them. All the help and all the maids and so on are living in the slums. A lot of the people walking out of the slums in the morning are going to their jobs as cooks or maids or whatever.”

“I remember,” I told Nicolai, “being in a yurt slum on the outskirts of Ulan Bator in Mongolia in 1985. There was mud and shit and open sewers everywhere but, in the morning, everyone was coming out of their yurts dressed in smart, spotlessly-clean clothes, crossing gnarled planks across the open sewers and going off to be secretaries and office workers or whatever in the Russian-style concrete blocks in the middle of town. Very surreal.”

“The craziest thing I saw in Kibera,” said Nicolai, “were open sewers with plastic pipes in them, carrying clean water. Just by using that clean water, you could avoid cholera and all sorts of diseases but, because it’s in the open sewer, it gets polluted by all the dirty water.”

“I presume,” I said, “that the young children are relatively happy, because they have known nothing different?”

“It seemed to me,” said Nicolai, “that all the young kids were quite happy running around but, as they started to grow up, they started to feel downtrodden by the whole situation.

“People kept telling me: We’re not living; we’re just surviving. They’re stuck in a horrible situation. They get paid so little from the work they do that they just can’t afford to live any better. They will continue to work as maids and security people for the middle classes and upwards.”

“When I was in Lima in the 1980s,” I told Nicolai, “there were people living in abject poverty in the slums and, a short distance away, there were people driving Mercedes Benzes and playing in private tennis clubs and it seemed to me the problem was that there was no significant middle class. There was nothing for the people in the slums  to aspire to. People had no hope of climbing out of the slums. Not them. Not their children. Not their grandchildren. No hope.”

“There’s some hope in Kibera,” said Nicolai, “because Africa is starting to boom and there’s much more investment. It feels like a lot of the young people who went abroad – to MIT and so on – are starting to move back. In Nairobi, they have people doing web design and iPhone apps.”

“Are you going back to Kibera again?” I asked.

“Possibly,” replied Nicolai. “Last year I was in Africa five times filming for NGOs and so on. I came back a month ago from Ethiopia, where I did a job for the British Council: an English course they run up in north Ethiopia, teaching the kids using wind-up MP3/radio players with solar panels on them. They teach the kids English on those.

“I really like Ethiopia. It’s the most friendly and easy-going place I’ve been in Africa. They’re very proud because they never had any colonisation. They’ve always been independent. They did have the Italians, but they kicked them out. They have their own language, their own calendar and even have their own time. If the sun goes down at six, they basically say, OK. Six is midnight and seven is one o’clock and so on. Everybody else in the world has decided on a single unified time, but not in Ethiopia – We do it our way! – I like that.”