Muncaster Castle – lovely, slightly eccentric and a bit isolated (Perhaps like the psychological make-up of many performers)

Yesterday I was in the Lake District in north west England. It is a lovely area but not for me. Cumbria is one vast hilly area widely bereft of WiFi or even mobile phone signals.

If the choice is between having WiFi, mobile phone signals and 24-hour supermarkets in a city… or living 20 miles from the nearest chocolate shop in idyllic countryside surrounded by the agonised howls and screams of cuddly woodland creatures ripping each others throats out every night, give me the city every time.

Cumbria is very pretty except for Barrow-in-Furness.

As an ITV researcher on Surprise! Surprise!, I once had to go there to talk to a blind man who wanted us to make his dream come true by helping him make a parachute jump. I saw Barrow-in-Furness in heavy drizzle. He was lucky to be blind.

We were going to arrange a (perfectly safe) parachute jump for him but, about a week after I met him, BBC TV managed to kill a contestant on Noel Edmonds’ Late Late Breakfast Show and we decided to abort anything which sounded even potentially dangerous.

Anyway, I was in Cumbria yesterday to see Martin Soan end his year-long reign as Fool of Muncaster Castle and hand the title on to the new Fool – chosen by a panel of experts.

Abi Collins aka Katinka won it – the first female Fool in the contest’s short history.

“What did you have to do all year?” I asked Martin.

“Absolutely nothing,” he told me.

“Wasn’t there something about beer?” I asked.

“The prize was free alcohol for the year,” said Martin, “but you had to be in Muncaster Castle to get your free beer and I live in London.”

Yesterday, he rushed back down to London after the day-long Muncaster Castlle event, to set up tonight’s Pull The Other One monthly comedy show in Nunhead.

“And then you’re off to do Pull The Other One in Leipzig?” I asked.

“Yes, on Sunday,” he replied. “… No! I leave for Leipzig on Monday! On Sunday, I’m writing a new show with Boothby Graffoe.”

Martin Soan yesterday with ceramic cigarette-end in his hat

“For the Edinburgh Fringe?” I asked.

“It’s taking all the tiny little elements I’ve been working on for years and years that I’ve made part successful and I now want to thread them all together into a beautiful tapestry of well-choreographed nonsense, madness and chaotic, sublime comedy.”

“It wasn’t bad, was it?” laughed Martin, “but that’s exactly what I want to do.”

“Why with Boothby?” I asked.

“Because it’s a huge jigsaw puzzle, he knows me inside-out, it’s difficult to be objective and he’s very good at turning rubbish into sparkling gems.”

I sometimes wonder if the blind man ever made his parachute jump.

In yesterday’s blog, I mentioned that Mr Methane, the farter of British alternative comedy, had e-mailed me:

“I met Bob Slayer at the weekend. The tank broke down due to fuel starvation, so he wasn’t able to arrive from out of the sea on an amphibious craft but is hoping to try again next year.”

… and I had absolutely no idea what that meant.

So I asked Bob Slayer.

“I farted on Mr Methane’s elbow at the weekend and he said that was the closest to his face anyone had ever farted! And Jimmy Saville: The Punch & Judy Show has received it’s first death threat.”

This did not clarify the amphibious tank. So I doggedly pursued the story for my own peace of mind.

Eventually, I crowbarred this out of Bob Slayer’s deranged memory:

“At the weekend,” he told me, “I was doing a gig at the Freerange Festival run by lovely people in the Brewery Arts Centre at Kendal in the Lake District.”

It came as no surprise to me that, somehow, the word “brewery” was involved.

“They had me performing outdoors on Morecambe Bay,” Bob told me, “at a place called Humphrey Head, where the last wolf in England was killed. We did some rock climbing and a tiny bit of caving and found some quicksand.

“I was supposed to arrive on an amphibious tank belonging to Mr Methane’s friend Ben but it broke down before it got to me. So I had to arrive late on foot instead.”

I then asked Mr Methane: “Tank? Your friend Ben has a tank?” 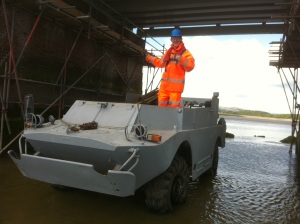 “Well,” said Mr Methane, “not a tank exactly. It’s a BRDM2 Superduck Amphibian. It had been in a barn all winter and, about dinner time last Friday, we decided at the very last minute to get it out, take it to Humphrey Head and let Bob use it as a prop to make his grand entrance… Unfortunately, the diesel had got contaminated.

“We think the lining of the fuel tank had started to degrade and pieces of debris clogged the injectors up. Hence it never made it to Humphrey Head and consequently we were late getting there but Bob seemed very happy that we had brought what he described as a Dolly Bird with us.”

Bob then continued his story:

“I apologised for my late and undramatic entrance and explained that the previous year’s gig was supposed to have ended with me flying off Gummers Howe in a paraglider but that also didn’t happen because it was too windy… but we did have a lovely time then and I found an alternative ending by eating a cow pat.

“I figured a cow pat was only part-digested grass and would be OK but I probably wouldn’t eat a cow pat again as (a) it was not very tasty and (b) someone has since pointed out to me the parasites that I could have picked up.

“I stayed up for the Saturday in Kendal and also went on Barbara Nice’s tour of the lakes. The captain of the boat told us that Beatrix Potter was not very nice to kids. So Barbara Nice set up an impromptu court to get to the bottom of the child beating allegations and it turned out that it was Beatrix’s mother who was the abuser of the young and we have now all vowed to clear the good name of the writer of children’s books. BEATRIX POTTER DID NOT BEAT CHILDREN. Perhaps you can link from that into the Jimmy Savile death threats…?”

“Perhaps not,” I replied. “What about the farting on Mr Methane’s elbow?”

“I have already been booked back for the Freerange Festival next year,” replied Bob, apparently changing the subject. “They are lovely people. I will do some other outdoor gig nonsense – and, as nothing ever goes to plan, I might as well make the plan as ridiculous as possible.”

“But what about the farting on Mr Methane’s elbow?” I repeated.

“I could do helicopter rides around the Lake District,” enthused Bob. “Diving out into a lake of custard… that sort of thing.”

So I asked Mr Methane.

“What about the farting on your elbow?” I asked.

“I was sat down in the bar at the Priory Hotel in Cartmel,” Mr Methane told me, “where Bob was staying. He lent against my arm and farted on my elbow. As I am 6′ 7″ when stood up, it was the nearest a man – but not a woman –  had ever farted to my face. Bob’s delivery was disturbingly HomoErotic but the stink soon killed off any innuendo in that direction. I think he needs to see a doctor. Perhaps colonics.”