Polly Trope first appeared in this blog in 2014, when she was publicising her book Cured Meat – Memoirs of a Psychiatric Runaway. 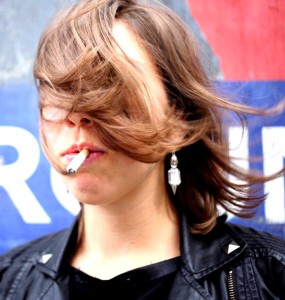 Polly Trope back in 2015 (Photograph by Joe Palermo)

This year – indeed, next week – she is performing at the Edinburgh Fringe for six days (12th-17th August) … as part of a collective known as Berlingeles.

Their show at Surgeon’s Hall is called Late Night Ceremony. Their blurb reads:

“This group showcase raises a fist with one hand and holds a glass with the other against the fact that the world we live in is a complete disaster. Borders close in, rents rise, intimacy dissolves. One person’s normal is another person’s crazy. Who gets to tell their story and who must remain silent? Embodied performance, experimental music, storytelling and a secret midnight ritual.”

I thought: What is that all about?

So I talked to Polly Trope at her home in Berlin via FaceTime.

She flies into Edinburgh tomorrow.

JOHN: So, Berlingeles. Is that a pun on Berlin Girls?

POLLY: No, it’s actually a putting-together of Berlin and Los Angeles…

POLLY: …because half of us are coming from Los Angeles and half from Berlin.

JOHN: There are four people involved. 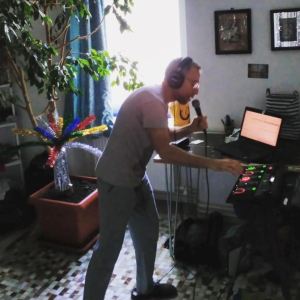 Brian Felsen rehearses for the show in Polly’s living room

POLLY: There used to be more. Some had to drop out. It was always supposed to be a group show. I put together some of the artists I’d been seeing on stage because I’ve been going between Berlin and Los Angeles all the time.

JOHN: Why the travelling?

POLLY: Because I fell in love with someone from Los Angeles. He is actually doing more of the going back-and-forth than I am. The pendulum is supposed to come to a halt somewhere but (LAUGHS) it is proving quite complicated to organise.

JOHN: The listing for the show on the Fringe website says:

SCENES OF A SEXUAL NATURE

One member of your cast a 14-year-old. Is that a problem?

POLLY: I think for that particular 14-year-old it’s alright. He’s not in the scenes of a sexual nature, but I think he’s seen such scenes before. He has been in the world of ‘horror performance’ and stage performance for quite some time. He can close his eyes when I’m performing.

JOHN: ‘Horror performance’? What is that? 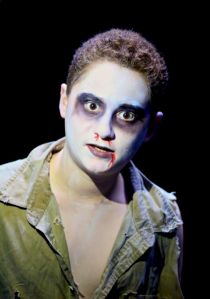 14-year-old Anatol Felsen in his make-up

POLLY: Zombie stuff. In Los Angeles it’s very popular. His mother is a zombie performance artist and he has always been involved in plays his mother has done. Every month or two he will be in a show. He puts on his make-up and he does ‘horror theatre’ in Hollywood and people come because every week is Hallowe’en in Hollywood. He loves doing it and he is going to do something based on that in our Fringe show. It is going to be the first time he is doing something on his own.

JOHN: What’s the short elevator pitch for your show?

JOHN: And you have a 14-year-old zombie…

POLLY: …and we have me, who is going to talk about the ritual of the one-night stand.

JOHN: So it is multiple rituals.

POLLY: Yes. We have one ritual that is actually happening AT midnight, but I’m not going to tell you what it is.

JOHN: I have a vivid imagination… 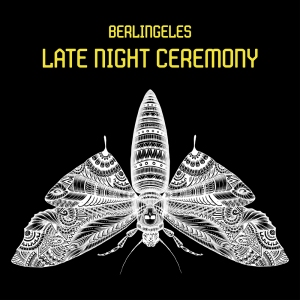 “People are going to come forward and be y’know… ritualised”

POLLY: It is going to be interactive and people are going to come forward and have themselves be… y’know… ritualised or… eh… ritually treated.

JOHN: Well, everyone is going to be hoping the midnight ritual is the one-night stand ritual.

POLLY: Erm, well… I don’t know if they would hope that.

POLLY: Absolutely. Each of us has a slightly different speciality. Brian Felsen is a composer, so he is going to compose live, performing a ritual with polyphonic chant, DJ looping and tribal drumming;. Mine is more storytelling. The 14-year-old…

JOHN: … is doing the zombie stuff… 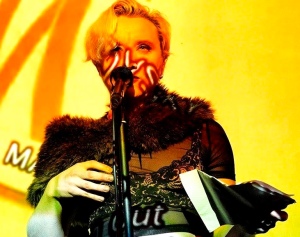 And Darling Fitch is a performance artist who is going to perform a ritual in noise – electronic noises and electronic music as well as elements of the queer culture and other things that I can’t talk about because they are secret. It’s a hopeful harsh noise poetry pop opera about the end of the world.

JOHN: Will the show have a life after the Fringe? Will you tour it?

POLLY: These particular people have just come together for the Edinburgh Fringe. I would love it to keep going, though. We are trying to set up more venues and gigs for us, maybe in the United States. If we did it in Berlin or Los Angeles, though, there would be more local performers

JOHN: Since the last blog about you in 2015, what have you been doing? Is there another book in the works?

POLLY: Yes. I wrote a second book maybe a year-and-a-half ago, which was supposed to be the sequel to my first book Cured Meat.

POLLY: So far, it’s been called Why Don’t You Kill Me?

I wanted to write a sequel to Cured Meat but to go more into depth about the whole sex work experience… Cured Meat is very much about mental health and the drugs aspect of the story and the sex work comes in at the last minute. So I wrote a second book. Also, with the rise of the #MeToo movement, I felt that people were talking about women’s issues more. So I wrote this big long second book about my experiences with sex work. And then, after it was all done, I realised what I actually needed to do was to stick my first and my second book together.

So I’ve been working on that. It was not a very easy thing, but I’m really happy because it’s all done. Now I just have to make and market it. 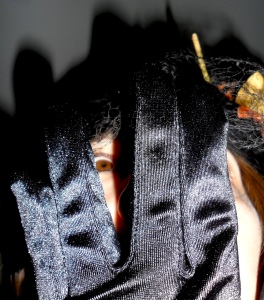 Polly Trope in her living room… being mysterious

JOHN: Is there a problem there?

I feel much more comfortable now talking about sex work than I did five years ago when it was still a more recent experience… I guess… It’s kind of moving towards… more transparency, I guess.