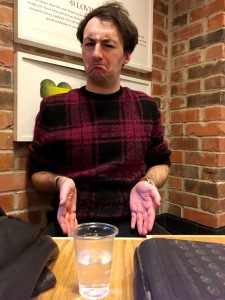 Simon Caine – Glass half full or half empty?

“You are also doing this lift thing,” I said. “Or this elevator thing, for American readers.” 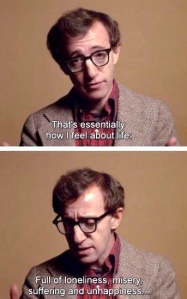 This is not Simon but could well be?

“I got a message the other day,” Simon said. “Out of the blue. No context. A message from a girl who saw me in Derby last year. It said: SAW THIS AND THOUGHT OF YOU… It was just an image of Woody Allen with a quote: Life is full of loneliness, misery, suffering and unhappiness. How good is that? She had seen that and thought of me.”

“What’s your Fringe show called this year?” I asked.

“Laughter Is The Best Placebo. The strapline for the show is that my life is a constant search for emotional electrical outlets – as in I’m always charging my phone and always trying to project my emotions onto other people. The opening line of the show is that the show is an attempt to work out whether comedy has improved my life or immeasurably ruined it.”

“Your fan in Derbyshire is going to love it.”

“It’s on at the Sweet Grassmarket venue, 5.00pm ever day except Wednesdays, when I get rudely awoken by the dustman.”

“I have no idea what that means,” I said, “but we will get to the rubbish later… Your elevator pitch idea is in the same venue.” 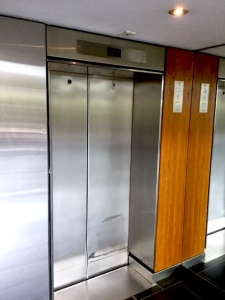 “Yes. In Apex, the really posh hotel in Grassmarket. They have two lifts and they’re allowing us to commandeer one of them for a couple of hours each day on the 14th and 15th of August.

“A reviewer will get in the lift with a performer, travel 3 or 4 floors and he/she has that amount of time to pitch their show to the reviewer.

“They can do anything they want as long as they don’t touch the reviewer. They can bring in props, do a little skit, sing a song – whatever. Anything they want. Then, at the chosen floor, they get out, a new act gets in and they have the same number of floors to pitch their show.”

“So,” I said, “it literally IS an elevator pitch.”

“Yes, the idea is you get through quite a lot of pitches and the reviewer is left bilious.”

“What time of day is this?” 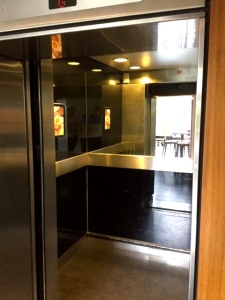 The performance space for the elevator pitch

“In the afternoon, I think, but we can do it at any point in the day when the reviewers are free. Kate Copstick said she might do it after your Grouchy Club show.”

“So,” I said, “even though a review is not guaranteed, if the pitch is good enough, a reviewer may come and see the show.”

“Comics at the Fringe can barely afford food,” I said, “which brings us neatly to rubbish. At the end of the Fringe, you are collecting left-over food.”

“Yes,” said Simon, “it’s a food bank collection for the homeless of Edinburgh. If you’re anything like me, you buy food for your flat but, at the very end of the Fringe, there will be some left over. So, instead of throwing it away, you can give it to people who need it much more than you ever did. People you have probably passed several times during the Fringe and not given anything to, like I don’t. 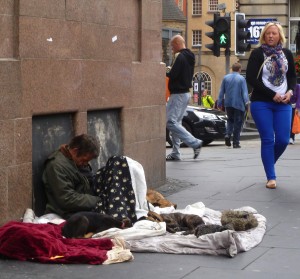 An Edinburgh street during the Fringe – amid the showbiz

“The first two years of doing it, I worked with a charity and wrongly assumed they would be run the same way as the food bank charities in London. It turned out they weren’t.

“With the one I was working with, I found out the people could only go three times a year and had to bring bank statements to prove they were too poor to have enough food.

“And it turned out they were a for-profit food bank, which didn’t make any sense to me.

“Now I have moved over to a thing called The Basics Bank, who only accept food that is not opened, and the Granton Community Orchard Garden. And there’s a third charity, The Homeless Period, who help redistribute hygiene products to women because, obviously, tampons and sanitary towels are not the cheapest things in the world and, if you are broke and living on the street, you don’t necessarily have the money to afford them every month.”

“Shouldn’t,” I suggested, “the period charity get together with the food charity and they can make black puddings?”

“I’m not giving you a reaction to that in case you use it,” replied Simon. 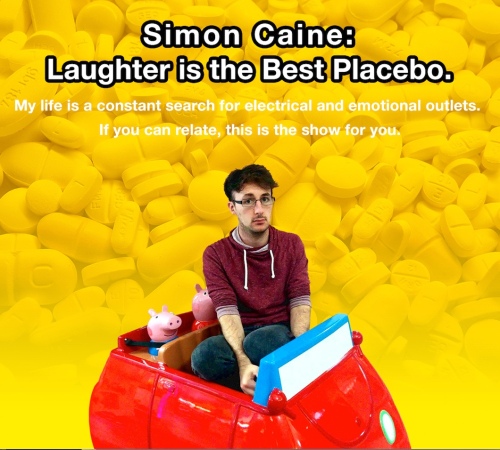