I stopped writing this blog daily at the end of last year. I thought it would give me more time to do other things. But, as is to be expected from the Third Law of Surreality, I am even more tied-up. 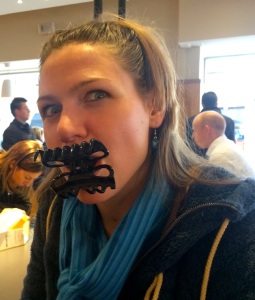 Nelly Scott being low-key in London a month ago

Over a month ago, I chatted to performer Nelly Scott, aka Zuma Puma. It was the day before she left London on a one-way ticket for France. She wanted me to mention her web series Grumpy Lettuce.

“We’ve got 14 episodes in all,” she told me. “We’ve got ten released. There were seven in the first season and then we waited until February and then started releasing the next batch. We might come back with a third season, but we’re also writing short films and a feature. It was a wild, really crazy, long journey. It took so long! The editing!”

“You’re going to France for an indeterminate length of time?” I asked her over a month ago.

“Well, yeah,” she told me. “I just got a one-way ticket. There’s a swami staying in my house right now.”

“Is he sitting in your house or levitating?” I asked.

“He’s pretty much levitating. He’s reading all of our palms, telling our fortunes, giving us life insights. It’s great. He came to stay the night and he’s been there for about two weeks now.”

“Basically,”Nelly told me, “you make a friend who has invited a swami over to this country to stay and then, when the swami arrives, your friend’s house is in complete chaos, so he sends the swami to you and then you have a swami and it’s kind of hilarious, because there are five of us in the house and we all are kind of swami-sitters. We pass him around.

“One day, I took Swami to see Big Ben. And the other night, I accidentally took him to a hip-hop night. I thought it was a hippy night but, when we showed up, there was hip-hop in a really cool space. He thought it was hilarious. He said: Nobody is going to believe that I came! He was taking pictures. All these really beautiful women were coming over and giving him hugs and saying: Wow! You look like some spiritual guru!”

“No. He liked lying on a couch and watched. He observed.”

“And,” I asked, “you call him Swami? You actually say: Are you hungry, Swami? Do you want a cup of tea, Swami?”

“Yeah,” replied Nelly. “We know his name, but we just call him Swami, because that’s how he was introduced to us.”

“No, he’s from Panama, but he’s been living in India for the last many years, living in caves and…”

“Yes. But he’s going to Spain soon. I’m going to meet up with him there. It’s kinda like he’s my brother, my uncle and a strange caveman all in one.”

“Why France and why a one-way ticket?” I asked.

“Because I have a crazy friend who is a muralist and she met a man who lives in France and she said: Come stay with us and we will build a puppet. I am developing a one-woman show, but I keep questioning what its purpose is.”

“What sort of puppet?” I asked.

“It’s gonna be a creepy baby.”

“A glove or a string puppet?”

“I don’t know. It might be a harness puppet. Last time I met up with this friend, she convinced me to go to San Francisco and, when I showed up, the people she was staying with were so not-cool with her inviting me because she had never told them she invited me.

“I ended up homeless, sleeping in a tent in central San Francisco. Before that, I spent my nights looking for parties. I would go into a party and, before the party ended, go to a quiet corner and fall asleep cos, at the end of a party at 3.00am, you are not going to go over to a nice young lady who is asleep in the corner and tell her to go out into the streets where it’s cold in December.

“I did that for about two weeks – crashing parties where I didn’t know anybody. I would just pretend I was part of it, then fall asleep in the corner… until I found the tent.”

“Why have I not had a life like this?” I asked.

“You still can,” said Nelly. “You can meet Swami… Swami lives like that. He has no plan ever and he just lives in caves and does fire ceremonies all over the world.”

“I guess,” said Nelly. “And to find new inspiration. I am going on a quest to reconnect with my creativity. I am going to go, live it and come back with all these stories.”

That was over a month ago. So, yesterday, I thought I had better catch up on what has happened since. I got this reply:

“You silly, ridiculous man, hahahah! Since we spoke, I have gone to France, devised a show, made a weird music video for music we have yet to find, travelled to Spain where I stayed for 4 days on the top of a quartz crystal mountain with seven women as a tag-along, then travelled down Catalunya and filmed for ten days with my dear friend Swami – the Fire Keeper movie – returned home, did a voice-over job, started an improv intensive to refresh me and am already one third sold out for my very own clown intro workshop called Clown Life which I will be facilitating April 23rd & 24th at the Pleasance Theatre in London.

I feel exhausted just reading about what Nelly Scott has done in the last month.

I have wasted my last month.

Where can I find a cave?

What will Nelly do next?

Once, when I was working for Granada TV in Manchester in the 1980s, I was staying in a cheap Bed & Breakfast where the walls were thin.

It is always a joy to get an e-mail from this blog’s occasional Canadian correspondent, Anna Smith, who lives on a boat in Vancouver.

This is the latest: 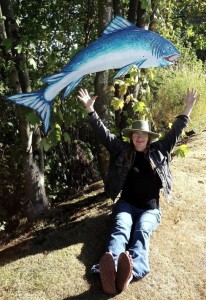 Anna Smith: not yet President of UruguI just ran out of the boat because I thought there was an earthquake. It was really rocking. It’s also windy but not THAT windy. One of my neighbours was out tying something down.

There was no sign that a boat had gone by. It must have been going fast. The river was all choppy from the wind. There was no trace of a boat.

It was stupid of me to run onto the dock because I thought it might be an earthquake. If there had been one, I would have been safer inside the boat.

One time I did feel a small earthquake.

It was centered off Haida Gwaii (also known as the Queen Charlotte Islands, off the Northern Coast). It was a quiet night and the boats rocked a bit quickly. It caused some damage on Haida Gwaii and an underwater rock slide blocked off a hot spring for a couple of years. It has just started flowing again.

There have been tsunamis on the coast, but it is not that likely here because we are protected by Vancouver Island. The whole of Richmond, which is built on an island of sand, is supposed to liquefy.

Local news is that someone has stolen two hundred magnolia trees.

When I decided to move back to my boat, I started telling people that I was sick of living in a metropolis (beautiful as it is, with all the tourists vomiting everywhere). Downtown Vancouver seems very loud and busy after being on the river. I always feel a bit like a tourist here anyhow. (I didn’t grow up here.) 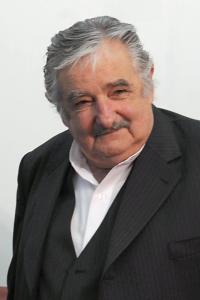 This is a picture of President José Mujica

My aim was to live quietly on the river and try to become more like José Mujica, the President of Uruguay, except I don’t want to run a country or grow a moustache.

It is very drab around here in the winter. There has been one tropical rainstorm after the next. Last week, I skidded down a path from the highway, completely lost my balance, fell down, got mud all over myself and didn’t even get hurt.

I landed strangely and I could hardly believe that I wasn’t hurt, because my legs seemed to land wherever they wanted and my feet were pointing in different directions. It looked pretty good, since I was wearing my white rat killer boots and the mud was like liquid black clay. It is known for its fertility.

Now it is a rainy morning.

My bilge just went off.