Improbable but true: The Edinburgh Fringe ‘Big Four’ venues are not so big

Two updates to yesterday’s blog in which I mentioned an odd coincidental meeting at an Edinburgh Fringe launch in London.

I also mentioned that, last night, I was going to a London Fortean Society talk on The Improbability Principle: Why Coincidences, Miracles and Rare Events Happen Every Day.

I had already seen this talk by David J Hand back in February at the splendidly-titled Dirty Dick’s in the City of London. But the talk was so interesting I thought I would see it again. It may seem improbable that I would see it a second time, but it is true. 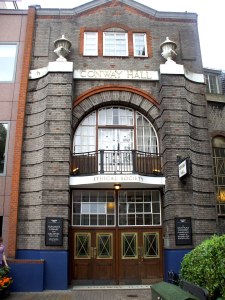 This was the first meeting in the Fortean Society’s new, occasional, venue Conway Hall at Red Lion Square in Holborn.

The host asked how many people had been to a Fortean Society meeting before. I think only three hands went up.

There were, I think, just over 100 seats and eventually only four empty seats remained, scattered around; one was next to me. Almost at the last moment before the talk started, a man sat in the seat. After the talk finished, we chatted.

He, too, had been to a Fortean Society meeting before. In fact, he, too, had seen exactly the same lecture back in February.

A coincidence. Not a big one. But, in a hall of just over 100 people, only three of whom had been to any Fortean meeting before, with only four empty seats before it started, another man who had seen exactly the same lecture before had sat next to me. Proof that coincidences, miracles and rare events do happen every day.

In yesterday’s blog, I also mentioned going to a launch event for the Edinburgh Fringe’s ‘Big Four’ venues – the Assembly, Gilded Balloon, Pleasance and Underbelly.

This brought a comment from Charles Pamment, who runs the Space UK venues at the Fringe: 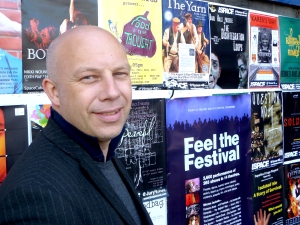 Charles Pamment of theSpace at the 2012 Edinburgh Fringe

As you know I’m not one to rock a boat but I reckon but all this rock and roll over the term the festivals “big 4” when it comes to venues is a tad inaccurate, depending on I suppose ones definition of ‘big’ of course. In fringe terms I’d like to think it means a venues performance programme size, a number of shows, or number of difference performance genres or even the number of sub-performance genres defined in the fringe programme. What else could it be?

Knowing you as one who still embraces the fringe ethos as a platform for all I thought you would appreciate some stats, these may be a little rough as not all shows are listed on the fringe site yet but for all wants an purposes we (theSpaceUK) have produced the largest programme on the fringe since 2012.

And this year is no exception, this August we will include some 290 shows in our programme, apparently the largest programme by one producer in the history of the fringe, so I’m told.

This is likely to be more shows than two of the big 4 put together (recent years define such), and near on 60 more than the Pleasance and give or take a few, 100 more than Assembly.

Now, you could I suppose throw in the free fringe as the producers of the largest programme, but I suppose there seems to be a varied number of different producers of that these days too. So, I suppose when one hears this weary term ‘big 4’ you can understand that one wonders exactly what that defines or is it as someone recently said to me simply a 00’s term that stuck!

Charles is. of course, correct, in that Space UK is a bigger provider of Fringe shows than any of the oft-called Big Four.