Tamara Cowan was the one who brought up the intestines

“So,” I said, “he now lives in Austria or wherever, but you are his representative here on earth.”

“How,” I asked, “did the annual Musical Comedy Awards start?”

“Ed Chappel set it up on his own nine years ago, when he was at Warwick University as part of an Events Management thing. He started it with online entries then hired out the Pleasance, Islington, for the final. The first one was won by Adams & Rea (no longer together as an act).

“The next year, Ed and I were both flyering for Bound & Gagged (comedy promoters) up at the Edinburgh Fringe and he thought it would be really fun to have live heats the next year. I had just had half my intestines chopped out and I was at home recuperating. I was lying there thinking: I don’t really know what I’m going to do when I get back to London. And he texted me saying: Oh, you seem to be good at comedy/chat stuff. Do you want to come and help me with it next time? In fact, I didn’t know anything about comedy.”

“Why,” I asked, “did you need to have half your intestines out?”

“Well, it was actually only a third. I exaggerated.”

“Isn’t that what intestines do?” I asked. “Why had they twisted?”

“I don’t know. They twisted and then they got a bit infected and the doctors had to lop a bit off. Apparently it only happens to very young babies and very old people.” 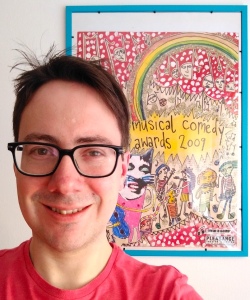 It was this or a picture of intestines – Ed Chappel publicising the Musical Comedy Awards in 2009.

“The doctors,” I asked, “never mentioned why?”

“I did loads of research and it didn’t really explain it.”

“The doctors never said exactly why they wanted to chop bits out of you?”

“They had done scans and seen it had twisted and exploded.”

“Do you have trouble digesting things now?”

“No. I have to eat quite a lot of fibre to make sure I ‘go’ regularly but, basically, it holds as much as it holds and, if it has less room to hold it, it will just push it out quicker. Tell me you are not going to write about this.”

“You were in hospital…”

“Yes. As the NHS was a bit overstretched at the time, I ended up updating my own chart sometimes because no-one else was.”

“The chart thing hanging on the end of your bed?”

“You updated your own chart?”

“Yes. I opened it up and saw all the pictures and it was the most horrific thing I’ve ever seen.”

“Yes. Open. Urghh! That near-death experience put me off acting.”

“I did an MA at Mountview.”

“So you were an aspiring actress?”

“I was. But that near-death experience put me off. I thought I don’t want to be an actress and then I found comedy and thought This is more fun.”

“So you had a third of your intestines out then decided to move into comedy? There’s a pun there somewhere. We just have to find it.”

“So you moved into comedy but not as a performer, despite the fact you had wanted to act.”

“Well, going to drama school put me right off wanting to go on stage. Then having a near-death experience made me want more of a tangible career.”

“Why did learning to be an actress put you off being an actress?”

“It made me quite self-conscious because you over-thought everything. And, after the near-death experience, I wanted to actually do things rather than rely on people employing me. Rather than have casting directors decide if I was going to do something, I wanted to decide myself to create stuff and do things. And I found the Musical Comedy Awards at that point. It meant I could be in charge of making something actually happen and putting on productions.”

“You wanted to be in control of your own destiny?”

“So, you organise the Musical Comedy Awards annually but, the rest of the time, you are…?”

“No…. Anyway, you decided you wanted to be master or mistress of your own destiny so, after having a third of your intestines out and deciding not to be an actress, you went into corporate property?”

“No. I went into theatre administration and then got accidentally found and offered a job by a cool and fun property company but then they got capital investment and it all started turning a bit horrible. Then Hollie’s thing came up and she was the first person who had given the MCAs an opportunity because she had been doing the booking for the Wilmington Arms in Rosebery Avenue where we did jam-packed musical comedy days with people like Abandoman. That was in 2010.”

“You said earlier that, when you started, you knew nothing about comedy.”

“Well, when I finished at London Metropolitan University, I went to the Edinburgh Fringe and worked with Bound & Gagged for the summer, like I said, and someone had to explain to me who Stewart Lee and Nicholas Parsons were. I really didn’t know anything about comedy.

“Then I went and got a job at the Lyric Theatre in Shaftesbury Avenue, tearing tickets. Through that, I met Tracey Collins – Tina Turner, Tea Lady – and Charlie, who helps with the MCAs.  And this year we are magically ending up back there because there was a delay with the Underbelly. So, after ten years of not working at the Lyric, we’ve all ended up doing the Musical Comedy Awards Finals there this coming Monday.”

Everyone’s back at the Lyric, Shaftesbury Avenue, this year

“That is fairly weird,” I said.

“So you’ve been doing the Musical Comedy Awards for eight years. Getting bored?”

“I love the variety. Musical comedians are a mixture. You get people who are basically comedians but who can play a bit of music. Then you’ve got cabaret people. Then actors who are all-rounder triple-threats: acting/singing/dancing.”

“Is it easier,” I asked, “to hide weak material if you are a musical comedian? Take (I named an act). Their material is OK but their personality is so overwhelming you almost don’t notice some of their material is weak.”

“But isn’t that the same with stand-up comics?” Tamara suggested. “It’s all in the balance. If you had someone else doing Stewart Lee’s material, it wouldn’t be as good without his stage charisma and timing. In some ways, yes, musical comedy is easier because you do have a kind of energy level that comes with playing the musical instrument, but it is harder as well because you have a lot more balls to juggle and make it click and work and get the audience to buy it.”

“There are no real musical comedy shows on TV,” I prompted.

“I think,” Tamara responded, “that a musical comedy show would work well on TV, but I don’t think they want to take a risk.”

“Maybe because it sounds expensive ,” I suggested. “Like putting on 42nd Street.”

“But,” said Tamara, “it can be very cheap. It’s usually just a… well, a white guy in his early 30s with a guitar. People get musical comedy and musicals mixed up.”

“You still have no urge to pluck a ukulele yourself?”

“No. I’m almost tone deaf. I can’t sing in tune. I can appreciate music but I can’t do it myself. I used to play the saxophone. I wasn’t too bad but it did give me an awful rash on my bottom lip and you don’t want a rash on your lips when you’re a teenager. And it is almost impossible to do musical comedy if you have something in your mouth.”