Is copywriting gross capitalism and poetry pure art? And what you can do with a cow in Phnom Penh, Cambodia.

Matt Harvey, poet of the potato

When I was in Totnes at the weekend, I met poet Matt Harvey who told me he had once made a radio programme for BBC Bristol called Beans Means Rhymes, about poetry and advertising.

“How did that come about?” I asked him.

“I had just written a love poem to a potato,” he told me.

“It was for a Waste & Resources Action Project Love Food, Hate Waste campaign. It was specifically created to modify people’s behaviour vis-a-vis the potato.”

“People,” explained Matt, “buy a lot of potatoes, eat a few of them and chuck the rest of them away. I was told I had to communicate in a poem that, if your potato does sprout in your storage area, you should not just chuck it away. You should peel, boil or mash it and, if you have some mash left over, you shouldn’t just chuck that away. You should put it in a bag in a freezer and have it later.”

“I would like to see what Tennyson would have done with that brief,” I said. “Why did they decide to do this in a poem and not in prose?”

“It was,” said Matt, “just someone’s very good idea to give me money to write a poem. They had a series of posters with pictures of specific food items on them and a little poem about each. The poem would contain within its crystalline purity little hints about the best way to relate to this food item.”

“How did you approach your potato poem?”

“They gave me a really tight brief. I now include it in performances I do because it’s so interesting: I read out the brief and then the poem.

“As soon as they told me the brief, I went and wrote a little bit of a gush of enthusiasm for the potato taking into account that your love of the potato should include not wanting to waste any part of the potato.

“I found writing to a brief was just a real pleasure: to write a six line poem that says it all. It made me more confident about writing poems to order. I always thought I would never be able to do that but the more specific the brief the easier it is to do, really.”

“Advertising,” I suggested, “is really the same as poetry in that you are selling a concept in a very few words.”

“Yeah,” agreed Matt. “Although, in poetry, you’re often focussing on something nebulous like a feeling of rapture or a nuanced feeling – as opposed to a vegetable.”

“Do you do widespread readings?” I asked.

“I do lots of village hall gigs,” Matt told me. “Have you come across the Rural Touring Forum?”

“I only heard about it,” I replied, “a couple of months ago from mind reader Doug Segal. He should have known earlier that I would be interested.”

“The Somerset one is called Take Art,” said Matt. “In Shropshire, it is Arts & Lung.”

“The Devon one invited me to offer a show,” said Matt. “It goes on the menu and village hall promoters get to choose what they want. I encourage people to bring Anglepoise lamps to my gigs, because I find a few Anglepoise lights will adequately light me and it’s really quite atmospheric.”

When we thought we had reached the end of our chat, Matt checked the messages on his mobile phone.

“There is some interest from a local snack manufacturer,” he said. “They want to talk to me about being creative with their foodstuff.”

“You are obviously a culinary cult,” I said.

“I was once a question on The Weakest Link,” Matt mused.

“Because I was the official Wimbledon poet,” he replied.

“The London borough?” I asked.

“The tennis championships in 2010,” he replied.

“You stood up in the crowd and declaimed poetry?” I asked. 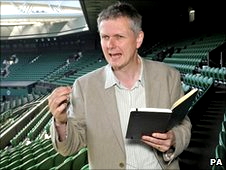 “I blogged poetry,” he explained, “and one morning, as a gimmick, I went out and read poetry to the queue. They stared at me, bleary-eyed, but they enjoyed it because they were filmed and they were excited. As soon a they saw cameras, they assumed I was important and assumed they should be excited, so they were.”

At the time, Matt told BBC News: “I have a rich inner tennis fantasy life.”

“Wimbledon have had an ‘artist in residence’ for the past seven or eight years,” Matt explained. “The artist has usually been a water colourist or someone working in inks or oils. But, in 2010, they decided they’d have a poet and two enthusiastic women who had heard me on Radio 4‘s Saturday Live and who worked in the visual side at Wimbledon sold this idea to one member of the committee. The rest of the committee didn’t care either way, so they got it passed. The only thing they said to me was Don’t embarrass us.”

“So not too many references to balls, then,” I said.

And, again, we thought this was the end of our conversation, but it was not.

“Did John tell you he went to Cambodia in 1989?” Matt Roper asked Matt Harvey.

Why would I? I thought.

“Matt has been to Cambodia too,” said Matt Roper of Matt Harvey.

“Oh?” I said. “Phnom Penh was very empty when I was there. The city had maybe only a third or a quarter of its previous population in it, so it felt very open and empty. The Vietnamese Army had left a month before, so people thought the Khmer Rouge might be back in power in a week or a month or six months. This was back in 1989. Now, from TV footage I’ve seen, I think it’s full of sex tourists and UN jeeps. S-21 was the saddest place I’ve ever been.” 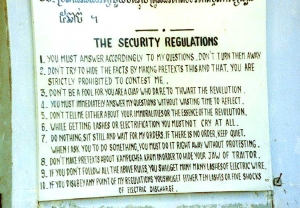 Regulations to be followed at Tuol Sleng – S-21 – Phnom Penh

S-21 was the former girls’ high school which had been turned into a Khmer Rouge interrogation centre and prison.

“S-21 is still on the list of tourist sites,” said Matt Harvey, “together with the Russian market and the royal palace. And you can also pay to fire a bazooka at a live cow.”