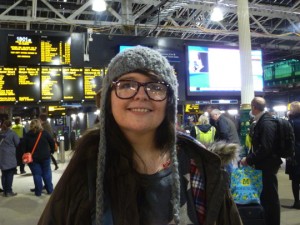 Scots comedienne Janey Godley’s daughter Ashley Storrie has decided to take up comedy again, after a gap of about 11 years (depending on how you calculate it).

Ashley got her first acting part at the age of three as ‘the wee girl in the metal tea urn’ in the movie Alabama.

At five, she was playing the lead child in a TV ad for Fairy Liquid soap powder – directed by Ken Loach.

In 1996, aged ten, she was cast in the lead role of the independent film Wednesday’s Child, which received enthusiastic reviews when screened in the British pavilion at the 1997 Cannes Film Festival.

Aged eleven, she performed her first ever stand-up comedy routine at the International Women’s Day celebrations in Glasgow and went on to do stand-up in London supporting, among others, Omid Djallili.

In 1999, still only thirteen, she wrote, produced and performed her own show What Were You Doing When You Were 13? at the Edinburgh Fringe, becoming the youngest ever stand up in the history of the Festival. She was also offered a chance to appear in the Jay Leno chat show on US TV but decided she preferred instead to go on a school trip to the Lake District in England.

She lost interest in performing live comedy when she was around fifteen.

She did appear in a sketch show Square Street with her mother at the 2006 Edinburgh Fringe and in an another sketch show Alchemy, staged by Brown Eyed Boy at the 2011 Fringe. And she records a weekly podcast with her mother. But, as I understood it, she had lost her appetite for live comedy performing.

She once told me: “I can smell a comedy promoter from a mile off: they smell of cocaine, alcohol and self-doubt.”

“So why have you got an enthusiasm for performing again?” I asked her when we met in Edinburgh yesterday.

“Well,” she said, “I enjoy making people laugh. I think the reason I stopped was mainly because of fear, but you come to a point where you decide you’ll either be scared your entire life or just do it and stop being a pussy.”

“But you weren’t scared when you were thirteen,” I said.

“You’re not scared of anything when you’re thirteen,” she told me. “I was fearless.”

“But you did get a bit worried when you were fourteen?” I asked.

“I worried about the same things around the same age,” I told her. 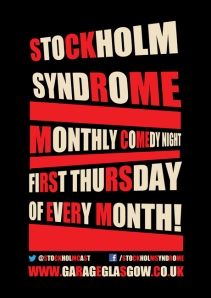 “I’m part of a sketch group now,” Ashley continued, “called The Stockholm Syndrome. I started working with some of them a couple of years ago in Alchemy at the Fringe and we just got together after that and they got me more stage time and the more time I spent with them the more I think I did get Stockholm Syndrome. And I started to think I’m going to do this properly.”

“So you’re performing with them at the Glasgow Comedy Festival…”

“Yes, at The Garage on 23rd March. We’ve done The Garage a few times and there’s a comedy collective type of thing where sketch groups get together. It’s called Lip Service or Tongue Service or something. We do bits there. But a lot of it’s really surreal and I don’t get it. So I bring to the table a level-headedness…”

“I don’t think they’re surreal,” said Ashley, “I think they… I… I did the Russian gypsy lady who thinks everybody’s got a tiny vagina.”

“Well, this is a tip,” Ashley told me. “When you get cold calls trying to sell you things, just pick up on a character and see how long you can get these people to engage with you… I had a man on the phone from India asking me if I had a whirlpool washing machine and he asked me how old it was.

“I told him (Ashley adopts an old woman’s voice) Oh! I’ll have to cut it open and count the rings… and this went on for ages and I think I ended up singing him a song. It went on for about half an hour and he eventually hung up the phone on me. He cottoned-on that I was just being annoying.

“And then sometimes I do scary (she adopts a rasping, throaty voice) Hell-oh!… Hell-oh! and I just do that over and over again until they hang up. And sometimes I do ‘crying baby’ and that really freaks them out. And once I did (she makes harsh, screeching sounds like a demented seagull) for ages and the man asked Are you singing or are you laughing? I just kept doing it until he hung up. I think they just phone me to wind me up.”

“I think,” I suggested, “that maybe your fame has gone round the Indian call centres and they’ve heard you’re entertaining to phone up.”

“But not yet in the UK,” I said. “Why aren’t you doing the Edinburgh Fringe this year, you idiot?”

“I think the Fringe is over-rated now,” said Ashley. “Too many big name acts coming and doing their big shows with just the same shite they do on their DVDs and people only want to see what they’ve seen on the telly. We’ve become a frivolous race of people who don’t want to try new things. The Fringe is wasteful.

“I spent my youth doing other people’s shows. Working for PR at the Underbelly and working for mum. I have no interest putting myself through that for myself. I’ve seen it first-hand and… och!”

“But now you are going back on stage again,” I said.

“I do like being back on stage,” said Ashley, “I just don’t want to do the Edinburgh Fringe, unless somebody else is going to produce me and I don’t have to worry about it. Maybe if one of those cunty big management/promoter companies put me on somewhere I’d do it. Then I wouldn’t have to flyer.”

“You could flyer in a bear costume,” I suggested, “and no-one would know.”

“When I was researching Glasgow history for the comedy bus tour I did with mum at the Merchant City Festival,” said Ashley, “I found out that, in the Trongate, there’s been two notable incidents of bear attacks.”

“Oh, the 1800s,” said Ashley. “One of them was a dancing bear from Russia who attacked a man and was put on trial and was killed on the gallows and the people of Glasgow felt so bad for his owner, who wept over the bear’s corpse, that they let this man carry his dead bear’s corpse over his shoulders like a giant rug through the streets in silence… Which was really rare, because hangings were very popular in Glasgow… They had to stop the hangings because people were skipping work to go to these hangings and to go to the lug-pinnings.”

“That was when they nailed people’s ears to the walls,” she explained.

“It was a punishment for annoying people,” said Ashley matter-of-factly. “There was a nasty, gossipy bitch who lived in the East End of Glasgow and they grabbed her tongue and dragged her by the tongue through the town to teach her a lesson about not being a gossipy bitch.”

“How long did people have their lugs pinned back for?” I asked.

“On the days of hangings or lug-pinnings, the bosses would come in to work and none of the weavers would be there, because they’d all be down at the gallows or at the lug-pinning to go and mock.

Hawkie’s autobiography of a gangrel

“One of the biggest selling-points was an old man called Hawkie… He was a book hawker. He used to tell the stories of the criminals written about in the little books he sold. And this guy became famous because his stories were always more interesting than what was in the books. He was like the original Billy Connolly. He would have hundreds of people gathered round him as he told the woeful tale of some Irish settler or whoever had come in and been hung. And people would buy the book and it was nowhere near as interesting as this old guy had made it out to be.

“Because of religion?” I asked.

“No, just because they were tinkers,” said Ashley. “And Hawkie would make jokes and defuse the situation and make everybody laugh at times when tensions were rising. This old, smelly book-hawker would stand up and say something inappropriate to the hangman and get everyone laughing and everything would be fine.”

“He was Billy Connolly before Billy Connolly existed,” said Ashley. “You should look up Hawkie. He wrote an autobiography. (Hawkie: The Autobiography of a Gangrel, 1888) He was one of the first paupers to write a book.”

“No, because it got published posthumously.”

“There’s no money in books,” I said. “Except for your mother’s, of course. You should write a surreal one.”