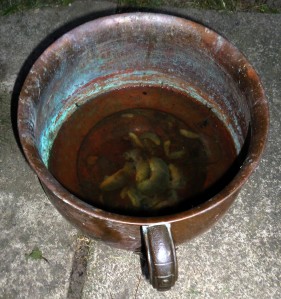 The savage slug war being waged in my back garden continues with increasing ferocity. Last night, at about one o’clock in the morning, my eternally-vigilant un-named friend went out, encountered, captured and dispatched seventeen – count ‘em – seventeen – of the ghastly gastropod molluscs, picking each up with two twigs, as if eating with chopsticks, then tossing them into a copper chamber pot and pouring boiling water onto them.

An ignominious death, but no less than they deserve.

Meanwhile, according to Anna Smith – one of the So It Goes blog’s increasing number of foreign correspondents, who has previously suggested drowning slugs in beer – the slug threat to the economically-vital marijuana plantations of Canada (a part of the economy unconnected to her) has lessened. She told me yesterday, from her home in British Columbia: 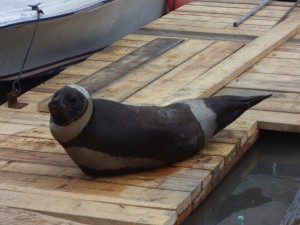 “The slugs have subsided for the moment. But a large creature appeared on our dock which resembled a gigantic slug. It turned out to be a rare Ringed Seal from the Aleutian Islands. These are not rare in Alaska, but we have never seen one here before. It may have gone off course, trying to avoid the Japanese Tsunami waste, which has now started to arrive on these shores. You might want to avoid showing the attached picture to your eternally-un-named friend, as it could give her more nightmares.”

Even though the Canadian slug threat may have temporarily subsided, other dangers lurk in our Western Colonies.

“The most exciting thing to happen in Canada recently,” Anna tells me, “has been the theft of thirty million Canadian dollars worth of maple syrup from a storage facility in Quebec.

“The police stated that it would be ‘difficult to trace’. My first thought was that it might have been a special order from China (or North Korea!). Most Canadians (myself included) had no idea that such vast amounts of maple syrup were being stockpiled in gasworks-sized tanks. I thought they just took the buckets from the trees and bottled the stuff. We are now being warned that syrup might appear on the black market. I fear it may result in a shootout in Saskatoon, involving tanker trucks of maple syrup and railcars exploding with bales of marijuana.”

Anna is shocked by the size of Canada’s syrup reserves. I am more shocked by the fact that the police accept there is a lively black market in maple syrup. I always thought Canada was a relatively law-abiding place. But, no, Anna continues:

“There has also been a large scale theft of potatoes in Canada. We are wondering if the next thing to go missing will be bacon.”

Richmond RCMP are scratching their heads after hundreds of pounds of potatoes were uprooted from a farmer’s field.

It’s not just a few potatoes that have been pilfered, but a football field full of spuds.  Richmond Police are investigating the theft after a local farmer reported that someone had moved in overnight and removed an estimated 5,000 pounds of taters. RCMP Sgt. Cam Kowalski says they are stumped.

“Someone has gone and uprooted all the potatoes in this particular area and gone off with them to, I don’t know, make French fries or vodka, but they are missing and we have no idea who’s done this because it certainly isn’t something we regularly patrol for during the night.”

Even Richmond’s Mayor has spoken out about the crop thefts saying it is a “disturbing offence”.

This easily-disturbed, potato-thieving area of Richmond is where Anna Smith lives. It is a suburb of Vancouver. She tells me:

“It is located on Lulu Island, the largest island in the Fraser River Estuary. Lulu Island is named after Lulu Sweet, a sixteen year old actress/singer from San Francisco who visited these shores in 1861. She was famous for appearing in public with bare arms, which in 1861 was probably the equivalent of doing a naked balloon dance in London in the 1980s.”

In London in the 1980s, Anna encountered (separately) the anarchic comedy triumvirate of the early Tony Green, the late Malcolm Hardee and the late Ian Hinchliffe, so I suspect there are more stories to emerge from this blog’s foreign correspondent’s desk in British Columbia.