So I currently have comedy performer Matt Roper staying with me. Last night, he went off to see some Edinburgh Fringe previews at comedy critic Kate Copstick’s Mama Biashara emporium in Shepherd’s Bush.

There is a video on YouTube of Copstick plugging the Mama Biashara emporium in 2010. Things have only changed for the better.

While Matt Roper was at Mama Biashara last night, I was off elsewhere. It was my birthday.

During the evening, Kate Copstick posted this on her Facebook page:

We’ve got wonderful character comic Matt Roper visiting the emporium to see a show tonight. For those who don’t know him, he’s the man behind the vile but utterly loveable powerhouse creation of Wilfredo, of whom I had the good fortune to witness last year at the Fringe. Due to an error at The Scotsman, my review of his show only gave three stars when in fact it ought to have been a full five. He’s up at the Fringe once again this year in Routines, a new immersive comedy experience which I predict will smash the Festival this year (3.45pm at the Three Sisters). Those who haven’t seen Matt at work are highly recommended to do so. A huge comic talent.

Facebook posting that set it all off, sent from Mama Biashara

I re-posted it on my Facebook accounts and thought no more about it until I got a Facebook message a little later from Matt. It said simply:

I had to look this up. The online Wiktionary’s first definition of ‘frape’ was:

A crowd, a rabble.

The Wiktionary’s second definition was:

And, sure enough, Matt had written the glowing review of himself (with the fake Scotsman stars) on Copstick’s computer while she had been off dealing with the Fringe preview in the Mama Biashara performance space.

I was not the only one who was taken in; there was widespread re-posting and Tweeting.

This morning, the real Copstick posted on her Facebook page:

So here’s a thing: Matt Roper popped by the Mama Biashara Emporium last night to pick up his typewriter. I leave him alone with my desktop for FIVE MINUTES and I wake up this morning to find FB wet with excitement over something I had apparently posted on the subject of how fabulous and talented he is and how the Scotsman stars were a misprint and should have been five. Yes I think he is pretty good and yes, to be fair, he did give me two slices of his pizza… but even John Bloody Fleming reposted the thing! Are my posts usually so fulsome in their praise? Well, I will be going along to see Routines (see place and times on ‘my’ previous posting) and it had better be FUCKING BRILLIANT, Roper!

They are still sharing Matt Roper’s fucking fake fucking fabulous fucking posting on my page about him and fucking WilfuckingFredo and RouFuckingTines. WTF.

Copstick is mellowing with age. 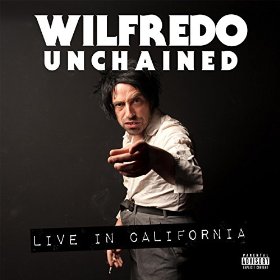 Matt strangely forgot to plug that his alter ego has a new album out – Wilfredo Unchained: Live in California

Matt just did this publicity stunt on a whim; there was no advance planning. But it is a thing of beauty. A contender (I would think) for this year’s Malcolm Hardee Cunning Stunt Award.

It did not just publicise Matt and his show but did so by making people not only fall for a con (as I did) but setting it up so that other people did the real work – all the people who were taken in and re-posted and re-Tweeted the initial frape.

It also, in this year – the tenth anniversary of Malcolm Hardee’s death – managed to doff a hat to one of Malcolm’s own legendary Edinburgh stunts. The one in which he and Arthur Smith wrote a glowing review of Malcolm’s Fringe show and submitted it to The Scotsman under the name of William Cook, the newspaper’s own highly-esteemed comedy reviewer – and it was, indeed published.

Matt’s stunt was almost better than this, in that he did not even have to write a fake review of his own show – he merely referred to an existing review and twisted perception of reality.

Only a few days ago, I had been lamenting to myself that no cunning stunts had, as yet, appeared publicising a Fringe show or performer this year.

Ellis & Rose (as I mentioned in an April blog) had pretended they had appeared at Soho Theatre by hanging their own carefully-designed photo on the wall of the theatre’s bar. But they have no show in Edinburgh this year.

And, a few days ago, there was a brilliant publicity stunt by magicians Young & Strange who, while a Sky TV reporter talked to camera about government NHS reforms, staged a variation of the sawing-a-man-in-half trick behind him, on the green in front of Parliament.

This stunt got even better when it transpired that the whole thing was fake – it was not a real Sky reporter, nor a real Sky transmission, just a beautifully-crafted fake and one of a series of Young & Strange self publicity stunts aimed at getting broadcasters’ attention.

I would think this wonderful stunt would have been a sure cert for a Cunning Stunt nomination – if it were not for the fact Young and Strange are not plugging any Edinburgh Fringe show.

At least Matt Roper has now set a high benchmark to which others can aspire.