“I am a desperate man,” I told comedian Matt Roper, who has been living in my spare room for the last few weeks (with my knowledge).

“I need a blog. You said you have a sore back. What has happened to it?”

“Or is it the fact you’ve got the weight of the world’s troubles on your shoulders?” I suggested.

“I’m glad you said that,” replied Matt, “because Lewis Schaffer needs to realise he’s not carrying them all on his own.”

“We’ve barely seen each other since you’ve been here,” I said. “Where have you been these last few weeks?”

“John,” said Matt. “This is not an interesting blog. Let’s get Wilfredo out.”

On stage, Matt plays the part of Hispanic singer Wilfredo.

Matt had been trying to persuade me I should interview him for this blog in character as Wilfredo in my back garden.

“My blog’s about real people,” I had told him. “It would be like Chortle (the comedy industry website) interviewing Alan Partridge instead of Steve Coogan.”

“Does Lewis Schaffer work at Greggs The Baker?” Matt asked me.

“Of course he doesn’t work in Greggs The Baker,” I said. “Why on earth would he?”

“His Wikipedia entry said he did last time I looked.”

It had been changed.

“Don’t mention Greggs The Baker in your blog,” said Matt. “Lewis Schaffer will be upset by that.”

“John, this isn’t interesting,” said Matt. “We could invent a fake person specifically for your blog,”

“Lewis Schaffer is enough,” I said. “I’ll take a picture of you.”

“Get your garlic grotto in the background,” said Matt. 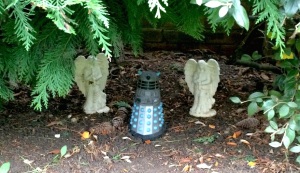 “Dalek grotto,” said Matt, correcting either me or himself.

I have a Dalek grotto in my back garden.

It started to drizzle rain.

“John, I can’t live in this country,” said Matt.

“It’s just so painful. Everything’s expensive. The people are miserable. Everyone’s got this glass-half-empty approach to life.”

“But you’re from the North of England!” I laughed.

“Not as far north as you,” said Matt.

“Scotland isn’t the North of England,” I said.

“Maybe I should move back up North,” mused Matt.

“But,” I pointed out, “if you go too far north, you hit Glasgow, which is never a good idea. Talk about misery.”

Glasgow – a fine and refined city of culture

“Misery and violence,” I said. “It’s a heady mix. Have you really never been to Glasgow?”

“I was once in a cafe called Leopold’s in Bombay,” replied Matt.

“I used to spend a lot of winters out there,” said Matt.

“India. I used to sing in clubs in the summer down in Devon. There was good money in it.”

“What sort of stuff?”

“Swing and jazz, all sorts of stuff.”

“Why have you never been to Glasgow?” I asked.

“Oh yes,” I said, “you told me you thought she should be a comedian.”

“She was very very funny,” said Matt. “She had a stick because she had shattered her hip bone. So she sits in a chair on stage with this stick, yelling at all the techies because the lights are too bright. Then she counts – One – Two – Three – and unseats herself grandly from this chair and all the audience applaud and she shouts Imagine! Getting a round of applause just for standing up! I feel  like Tommy Cooper! and all the audience applauded.

“So there’s a scoop for your blog,” said Matt. “Marianne Faithfull is a huge Tommy Cooper fan.”

I left Matt outside, smoking in the drizzle.

Inside, there was a message on my computer from someone I know who had better remain nameless.

“I am listening to Lewis Schaffer attempting to interview Stewart Lee on Nunhead American Radio,” it said. “Worth a listen. Total chaos.”

Sometimes I think: Should I continue to write this blog? Does anyone really believe Lewis Schaffer exists? 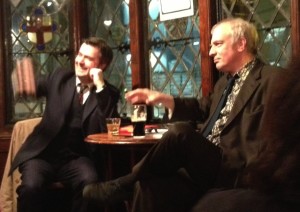 I went to the Sohemian Society in London last night to hear about “Gay Hussar Nights”.

The evening was billed as two insiders’ journeys through Bollinger Bolshevism with the Rabelaisian Left: “Former Tribune editor and Labour Party National Executive member, turned Al Jazeera TV correspondent Mark Seddon and multi award-winning cartoonist Martin Rowson will chew the cud and spit it all out for your delectation in an evening of downright irreverence and much jocularity all laced through with a healthy contempt for the British political and media establishment.”

And so, indeed, it turned out.

The Gay Hussar is a famed Soho pub that, in pre-Blair days, was the haunt of left wing journalists and politicians. In the 1960s, the owner threw prominent Labour Party politician George Brown out of the building when, uninvited, he started to feel-up the woman sitting next to him – which was said last night to be “the only known case of a serving Foreign Secretary being thrown out for being drunk and disorderly”.

There were also stories about “the great left wing Labour MP and serial fellationist Tom Driberg” – a gay friend of gangsters the Kray Brothers and rumoured to be a Soviet agent via the Czech intelligence service.

“When Tom got very excited about the swinging sixties,” Martin Rowson said last night, “he tried to entice Mick Jagger to stand as a Labour MP and had dinner with him in the Gay Hussar. Everything was going swimmingly well until he started fondling Mick’s knee and rather blew it, as it were.”

There were two other people at that dinner: Mick’s girlfriend Marianne Faithfull and (the poet) W.H.Auden. While Tom and Mick were talking about Labour Party politics and the coming revolution, W.H.Auden asked Marianne:

“Tell me. Have you ever smuggled drugs into the country?”

To which Marianne mumbled a reply.

“Ever take them up the arse?” asked W.H.Auden

The evening broke up shortly afterwards.

Mark Seddon is a man who obviously shares my taste for the bizarre as, last night, he recommended people should take holidays in the people’s paradise that is North Korea – he has been there seven or eight times. He also told another story about George Brown.

The esteemed Labour politician was at a ball in Lima, Peru. With music playing and, having had quite a few drinks, George Brown was feeling ‘tired and emotional’ and went up to a vision of loveliness in a long gown, saying:

“Beautiful, beautiful lady in the red dress, can I have this next dance?”

To which the reply came: “Certainly not. This is the Peruvian national anthem… and I am the Cardinal Archbishop of Lima.”