You could be forgiven for thinking that being the creator of new Edinburgh Fringe venue Bob’s Bookshop must have gone to comedian Bob Slayer’s head.

There are 17 levels of pledges running from £5 (for which you get an eBook of the opus) through £25 (you get a signed, numbered  and personalised hardback copy with a doodle and note from Phil in the front and your name printed in the book itself) up to £1,001 (for which you can get pretty much whatever you want to get).

“So,” I said to Bob when I met him, “Phil Kay’s never written a book and you know nothing about publishing.”

“Well,” said Bob “you COULD start from that angle. But I do know about putting out records and we are working with Nick Awde who you blogged about a few days ago and who does know a lot about publishing through his Desert Hearts and Bennett & Bloom publishing companies.”

“So Phil Kay’s book will be published by…?” I asked.

Bob Slayer – He aims to get a head in publishing

“We will do it as a Heroes imprint because our stage shows are promoted as Heroes of Comedy/Heroes of Fringe,” Bob told me. “Part of the inspiration for doing the Heroes shows was that, in 2009, I saw Phil Kay’s show at the Fringe.”

“When last heard of,” I pointed out, “you were writing your own book about your exploits in Australia last year with Gary The Goat.”

“I was trying to finish my books,” said Bob, “but I got very busy doing other things and happened to mention to Phil Kay that I was chatting to Nick Awde about putting out books by comedians and he said Funny you should say that; I’ve just sacked my literary agent because they looked at what I’d done and asked if I could make it more coherent. What the agent was really saying was could Phil follow the agent’s idea of coherence.”

In the Kickstarter pitch, Phil Kay says: “Books are expressions of newness, of self. I am doing what I consider coherent.”

Book is not normal. Nor is its author. Wholly Viable Phil Kay

“This is not a normal biography,” Bob told me. “It’s a collection of wonderful stories with Phil’s life philosophy in it. Like he says: “Imagine what you’d get up to if your job was telling tales of what you’d been getting up to… What would a man do with the blessing to do anything and be paid to retell it..?

“In the book, he talks about how, if he’s on the way to any gig, it has the potential to be the best gig in the world.

“If you stick to a script, you can only be as good as that script is. You are saving yourself from being worse than that script is; you will give an adequate performance. But, if you have a fluidity in what you are performing, you have got the potential for that gig to be the best gig in the world, because there’s no upper limit.”

“Well, Phil’s gigs are never less than unique and very interesting,” I said.

“Everyone has a story about Phil,” enthused Bob. “The follow-up book might be a compilation of all the people who have wonderful Phil Kay stories. Quite a bit of the book was written when Phil Kay was sharing accommodation with Phil Nichol.”

“Bloody hell!” I said. “That must have been an interesting slice of life.”

“Doing books this way – independently,” explained Bob, “is like my Heroes venue at the Edinburgh Fringe. We cut out the middle man and put out things which are truly creative and original. It’s more like a collective.

“I used to work in the music industry and saw it go through a massive change – and change was an opportunity for different people to come along and do things differently.

“A friend of mine was a roadie for Marillion, a then long-forgotten band who were still touring, still putting out albums and selling maybe 100,000 copies and they, really, were the first band to do crowdfunding. Their record sales were going down, but they still had this hardcore fanbase who would organise themselves on a messageboard.

Marillion in 2007 owed some of their renewed success to fans

“There were a bunch of American fans saying: Why don’t you come to America? Marillion told them: We can’t get the tour support. We can’t afford to. And the fans said: Well, if we can cover the cost, would you come? And Marillion went: Well, yes, of course, but…

“So these fans emailed round their usergroup – remember this is back around 1999 or 2000 – and they raised enough money to fly the band over. The tour got put together and the band decided to record a live album during the tour to give to all the people who had paid in advance. That was the start of Marillion crowdfunding and the fans said: What can we do to help you next?

“So Marillion said: Right. Instead of haggling with a record label over budgets, will you help to fund our next album?

“I certainly know that, with their second crowdfunded album, they raised half a million pounds and a single from the album went Top Ten in the UK charts.

“They now run Marillion weekenders at Pontins Holiday Camps. They take them over completely and it becomes Marillion’s holiday camp for the weekend. They play entire albums live and do requests.

“All Tomorrow’s Parties were the first people to do that: to realise what a great place to do a festival a holiday camp is, with everybody totally into the same thing.

“With Marillion, it wasn’t just about getting money. It was about finding people who went: Wow! We’ve given ourselves the chance to see Marillion live!

“That lead to crowdfunding for other bands and Amanda Palmer and so on and Radiohead doing their own thing. 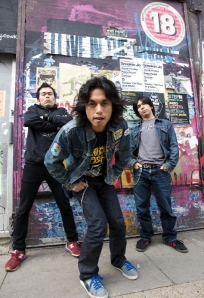 “I suggested crowdfunding to a Japanese band I was managing – Electric Eel Shock – and they said: Oh, it’s OK for Marillion: they’ve already got a fanbase. But then their record label started to really mess us about and I needed to raise £10,000 in two weeks to get us out of this record deal and I just emailed the fans, told them why we needed the money and I said: I need 100 fans to give £100 and you’ll be on the Electric Eel Shock guestlist for life. And we got the money straight away. 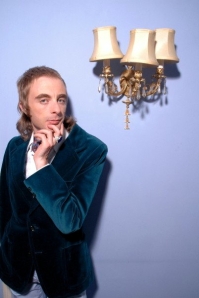 “He’s doing his Secret Gigs, which is wonderful for just connecting with his audience, because you can only go to the gigs if you’ve already been to a previous Paul Foot gig. He says: We don’t want people in here unless they are confirmed Paul Foot fans. It takes half an hour to get into the venue because Paul chats to everybody and processes them for five minutes and then seats them and asks them what they’ve been up to. And fans get to know each other: Oh. How many times have you seen him? Those things are three hours of Paul Foot: they are the equivalent of the Marillion weekender.

“When we put Electric Eel Shock fans on the guestlist for life, the motivation was just to get immediate money, but the result was much more than that. Instead of coming to see them once, when they did a ten-day gig of the UK, people would say to each other: How many gigs have you been to? How many COUNTRIES have you been to to see them?

“Their Ichiban Fan – Number One Fan – was the first fan to see them on four continents and he eventually became their tour manager.”

“And the title of Phil Kay’s book?” I asked.

“The Wholly Viable,” said Bob. “And I know from experience that it is.”