Yesterday, I was at Brunel University in London, where their Centre For Comedy Studies Research had a panel discussion on Comedy, Class and Offence.

Mark Boosey, esteemed and eternally mysterious British Comedy Guide boss, brought up the 2008 ‘Sachsgate Affair’ in which vast offence was reported after a BBC Radio 2 edition of The Russell Brand Show.

On the show, Russell and guest co-presenter Jonathan Ross had phoned up actor Andrew Sachs (Manuel in Fawlty Towers) to invite him on as a guest. When he did not answer the phone, four messages were left mentioning that Russell had had sex with Sachs’ granddaughter, who was one of the performers in a ‘baroque dance group’ called Satanic Sluts.

Some extracts from the messages are below: 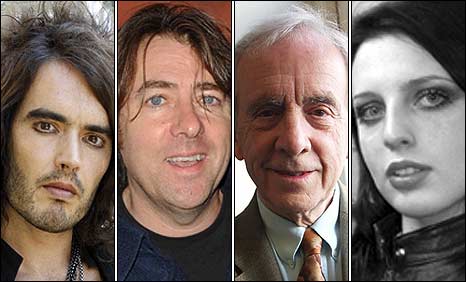 MESSAGE ONE
Jonathan Ross: ”He fucked your granddaughter… “

MESSAGE THREE
Jonathan Ross: “She was bent over the couch…”

However, yesterday, Mark Boosey gave the timeline for the public’s outrage:

SUNDAY 19th OCTOBER
The BBC noted two complaints in its log of listeners’ views. One referred directly to the Andrew Sachs section.

The Mail on Sunday’s trigger for Sachsgate

SUNDAY 26th OCTOBER
Eight days after the broadcast, the Mail On Sunday ran a main story on the Andrew Sachs answerphone messages.

TUESDAY 28th OCTOBER
The total number of complaints rose to 4,772.

Mark Boosey yesterday pointed out that only two people who heard the broadcast on transmission had been offended (perhaps only one) and it had taken eight days for 1,583 other people to have been offended second-hand.

What it all proves I do not know, but it must prove something. I personally thought what was broadcast (which I have listened to) was way-way-over-the-line into unacceptable offensiveness.

Yet, on 9th November 2008, Russell Brand told the Observer that what had been broadcast had been “toned down”: that “the worst bits” were cut out before the broadcast – presumably they believed the new version was not offensive.

I guess it also shows that, in a world of instant TV, radio and internet, newspapers still have a big effect. And it had a lasting effect even after it ‘ended’.

On Friday 21st November 2008, after publishing a report on the incident, the BBC Trust said that a list of “high-risk radio programmes” should be put together to prevent a repeat of what happened.

That is simultaneously sensible and unsettling and the BBC have, arguably, been running scared ever since.

Will following in Hitler’s footsteps help me at Britain’s Big Comedy Conference?

Will this help me in a world of comedians?

I flew to Nuremberg this morning at the godawful hour of 07.40am – at least I did if I got up in time to be at Stansted Airport at 05.40am. So, if you spot any gibberish in this blog more than normal, it is caused by me writing it at some ghastly, inhuman hour. This blog was posted when I left for the airport. I may still be there at the airport. Who knows?

Why am I going to Nuremberg?

Well, going to Nuremberg did no harm to the career of Adolph Hitler so, I figured, why not? Someone has to and I may be able to pick up a few tips for speaking at The Big Comedy Conference in London on 30th November.

I am going to be on one of the many panels there. I am not quite sure which panel, but I am keeping schtum in case they realise that I don’t know anything and I lose out on the free lunch.

The Big Comedy Conference is billed as “a day of lively talks and workshops tailored to arm aspiring stand-up comedians, producers, performers and comedy writers with the knowledge and tools to help them forge a career in the British comedy industry.”

So… much like the Nuremberg Rallies of old, it is aimed at a bunch of sociopaths who dream of world domination – though, this time through the medium of HBO, Comedy Central and BBC3 rather than Panzers, Stukas and blitzkriegs.

Look, I’ve had no sleep.

“I’ve been wanting to run a comedy conference for a number of years and this year I took a deep breath and committed to it,” the Big Comedy Conference’s führer Mark Boosey told me yesterday. He is Guide-meister at the British Comedy Guide who are organising it.

You will gather I am trying to ease myself into my Nuremberg visit.

But, then, in the Conference publicity itself – written before my trip to Nuremberg was known – it says: “John Fleming is the entertaining comedy blogmeister general and keeper of the flame of alternative comedy”.

Lots of good people… but also me

The Big Comedy Conference have got performers like Jo Brand, Al Murray and Arthur Smith lined up. Well, not LIKE them. They ARE them… As well as writers, commissioners, promoters, agents, editors, BBC heads and, indeed, anyone and everything bigger than the late Basil Brush.

The number of big names involved presumably has a lot to do with the fact that writer Dave Cohen has overseen the programming of the event and he knows everybody. In fact, he knows so many people that he has probably forgotten I am the John Fleming who, as an Associate Producer, worked with him at Noel Gay Television in the early 1990s. I suspect he has me muddled up with some other John Fleming – there are millions of the bleeders.

My full name is actually John Thomas Fleming – I was named after my two grandfathers (John McLellan and Thomas Fleming) and I swear that any alternative meaning of ‘John Thomas’ was unknown to my parents at the time I was born. They were going to call me John Tuesday Fleming because, when my father first saw me in the hospital, he said to my mother: “Let’s call it a day.”

Anyway, when I applied for a National Insurance number after leaving college, it took ages to get one because there were five – yes FIVE ! – John Thomas Flemings all born on the same day, month and year. The Social Security people thought I was the one in Newcastle trying to con a second number out of them.

John Flemings – there are millions of the bleeders…

So I suspect Dave Cohen may have muddled me up with a more worthy John Fleming who is, as a result, going to miss out on the free lunch.

Dave told me yesterday: “It’s great to be involved in something that really covers what it’s like for people starting up now. There are conferences and talks for performers and similar ones for writers, but this is the first time anyone has tried to put something on that gives an idea of the whole picture.”

Dave Cohen may have got me confused

He then wisely added: “I thought it would be a lot harder than this and it is. It’s like one of those toys where you stand on one thing and something else pops up that you have to stand on. Organising the talks has been a little bit like juggling jelly with one hand tied behind your back while swimming through an oil slick – actually the novelist Anne Tyler has the best description when she talks about organising toddlers – like herding water. I’ll go with that.”

I know what it feels like. When the late Malcolm Hardee and I compiled the short story book Sit-Down Comedy – alright, Malcolm made phone calls and I had to cajole, shepherd and sometimes advise 19 stand-up comics most of whom had never written for print before – it was like, I thought, doing a plate-spinning act. You had some plates happily spinning away but then one would suddenly go wobbly or would crash to the ground.

Mark Boosey told me yesterday: “What I really want to emphasise is that The Big Comedy Conference is not just a day where people come along to hear about how nice it is at the top and what a lovely time everyone had on set with this star or that celebrity – I’ve been to some of those kind of things before and they’re pointless. This is going to be a day about arming people with the facts, knowledge and contacts they need to further their career. The speakers are going to be briefed to keep everything relevant and useful. No waffle!”

So, like I said, they may have got me confused with another John Fleming.

It will be our little secret.