Yesterday, my two weeks of jury service ended – two days into Week Three – with the defendant leaving the box spitting these words to the judge (which I paraphrase, but not much):

“You’re saying I’m mental. I’m not mental. You can fuck off! You and your jury can fuck off. Fuck off!”

With this, he fairly calmly left his glass-fronted box and there were a few claps from the public seats which seemed to come either from his mother or the lady sitting next to her whom we presumed was his aunt. They were ejected.

I think next time I am called for jury service, I may arrive at court screaming: “He’s guilty! He’s goin’ dahn! He’s goin’ dahn! The voices! Can’t we hear them? We’re all going to die! What’s the point?” then falling to the floor screaming and weeping.

All of which has nothing to do with me sitting for ten minutes last night off Charing Cross Road in London, on a doorstep with Miss Behave. Except we ended up talking about mayhem – the word I have decided to relentlessly use from now on to describe the new wave of rising British comedy performers.

Miss Behave and I were actually getting together to talk about the Increasingly Prestigious Malcolm Hardee Awards Show which I am producing and she is presenting on 23rd August at the Edinburgh Fringe – two hours, one hopes, of utter mayhem.

“So let’s do it like last year,” I said. “You basically suggest all the bizarre acts and I’ll figure out the minutes. Mat Ricardo’s going to do some spaghetti juggling and we have the Russian Egg Roulette Championships – Richard Herring’s one of the people who’ve said they’ll do that.”

This year, Miss Behave is also running the new Bob’s Bookshop venue with Bob Slayer, which has an eclectic mix of shows including my own five-day chat show and Miss Behave’s Game Show, the billing for which says:

Tired of everything meaning something? Just want to have fun? Then look no further: we have shits and giggles galore. Sixty minutes of games, chaos, great acts, bad acts, dancing and fun.

“It involves people and their phones,” she replied. “I kinda don’t want to say too much about it in a weird way. I did three versions of it in the Wonderground recently, just to see how it would go and I’ve never seen an audience that excited… Seven standing ovations one night.”

“And you’re doing a midnight show with Bob aren’t you?” I asked.

“Yes. Me, Bob and Phil Kay. The title Bookshop Midnight Mayhem is probably quite apt though, probably, it’s less about midnight and more about mayhem.

Adrienne Truscott Asking For It in her Fringe show

“I’ve booked some really good people into Bob’s Bookshop. There’s Adrienne Truscott doing her Asking For It: A One-Lady Rape About Comedy Starring Her Pussy and Little Else.”

“That’s the one where she’s only clothed from the waist up and the ankles down?” I asked.

“Yes. I’ve also got a guy called Stompy. He’s never done Edinburgh and I’ve persuaded him up to do some bits and bobs. He’s like Martin Soan on crack.”

“That sounds like Martin Soan himself,” I said. “Will he be naked?”

“When necessary,” replied Miss Behave. “He has an act called The Half-Naked Chef which may or may not be what he’s doing up there; I don’t know.”

“How would you describe yourself?” I asked. What are you? A cabaret act?” 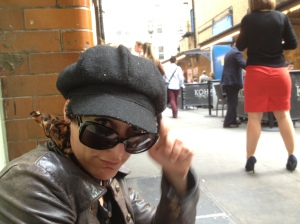 “So sticking a flower through your tongue is just a sideline?” I asked.

“And more follies,” I suggested.

“What acts shall we have on The Increasingly Prestigious Malcolm Hardee Awards Show?” I asked. 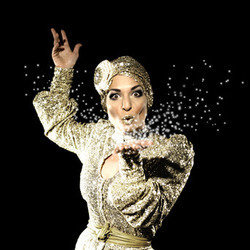 “I don’t know,” she said. “The acts I’m booking for Miss Behave’s Game Show are going to vary from a pigeon to a tramp to a dog to a flyerer to maybe an act here and there.”

“Does the pigeon have a manager?” I asked.

“Probably moreso than a lot of the acts,” suggested Miss Behave.

“And this would be a real pigeon?” I asked.

“It’s a game show and there will be a commercial break and a guest. That guest can be anything. What is refreshing in Edinburgh? Someone who is not plugging their show.”

“A pigeon,” confirmed Miss Behave. “I’m also figuring a flyerer would be quite funny – someone who hands out flyers in the street.”

‘Not necessarily,” argued Miss Behave. “Someone from the street team. They come on for three minutes and we see what happens. They’ll probably get heckled. I started life as a flyerer… Aged 13, I used to flyer over there in Leicester Square for four or five different music clubs. From the age of 13 to 18 I flyered and I was the best fucking flyerer. I had a whole little business going with it. It was brilliant.” 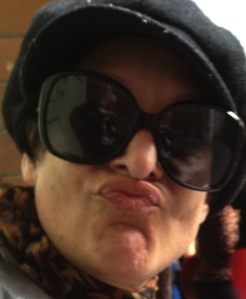 “I think it will be a fun Edinburgh, provided it’s not a torrential Edinburgh. There’s a lot of good people going and I think the sands have shifted. One of the reasons I’m doing Edinburgh is to prove to myself that it can be somewhere creative that you can develop stuff: you can run stuff in. If that’s so, then suddenly the festival re-opens in a massive way.

“At Adelaide this year, I made money and developed the Game Show and I’m hoping the same thing can happen in Edinburgh this year. If that can happen, then – without sounding like an arty wanker – the artists can take back the Fringe festival and there will be an independence and an autonomy.”

The mystery of a £500 million man, the German love of Red Indians and the tough future for seven dwarfs.

I was in Brighton yesterday, visiting a friend. Her partner comes from Wolverhampton.

When I arrived, she asked me: “Have you heard about Snow White?”

“Apparently,” she told me, “Radio 4 says the local panto in Wolverhampton this year is Snow White, but they have sacked the seven dwarfs… Sacked them! Suddenly!”

I looked at my friend.

“What on earth did they do?” I asked.

I had visions of the legendary mayhem and Bacchanalia which reportedly happened among the Munchkins during the filming of The Wizard of Oz.

“They didn’t do anything wrong,” my friend explained. “It was the economic recession and the soaring cost of dwarfs… The theatre is going to replace the dwarfs with children wearing masks.”

“It won’t be the same,” I replied. “Don’t Look Now would’t have been the same. Didn’t they think about the soaring cost of vertically-challenged people before they employed the seven dwarfs in the first place?”

“That seems a bit remiss of them. Standards are falling at the BBC.”

“We live in a strange and mysterious world,” I said.

We had a cup of tea.

Later in the afternoon, in The Lanes, we picked up a leaflet for the Brighton Festival Fringe. At the top, it said: The third largest Fringe in the world.

“Brighton has always been billed as the second biggest,” my friend said.

“You’ve been shamed,” I ventured. “Edinburgh is by far the biggest arts festival in the world and the biggest Fringe. What on earth is the second biggest?”

So we went to Brighton’s always surreal-sounding Vegetarian Shoes shop and stared in the window. Nearby, was a man sitting on the ground outside a Native American shop; he was dressed as a Tibetan lama and was apparently talking on his mobile phone to his girlfriend; he had an English accent.

“They’re very popular in Germany,” my friend told me.

“I seem to remember reading,” I said, “that German movie-goers are very fond of Westerns, too. What’s that all about?”

“I can’t help feeling that, if Hitler had dressed in a Red Indian head-dress, it would have undermined his credibility,” I suggested.

My friend looked at me.

Any news of Nicholas van Hoogstraten?” I asked, as we walked on. I’m always interested in people with unusual lives and my friend had once given me a biography of van Hoogstraten as a Christmas present.

By 1968 (aged 23), he simultaneously became Britain’s youngest millionaire and started a 4-year prison sentence for paying a gang to throw a grenade into the house of Rev Braunstein, a Jewish leader whose eldest son owed him £3,000. He later said of the people who threw the grenade: “These weren’t anarchists: they were businessmen, respectable people.”

In 2002, he was sentenced to ten years’ imprisonment for the manslaughter by two other men of business rival Mohammed Raja; a jury decided that “although he wanted Mr Raja harmed, he had not wanted him murdered”. He was released in 2004 after successfully appealing against his conviction on the grounds that “there was no foundation for a manslaughter case.” In 2005, Mohammed Raja’s family won £6 million in a civil action against van Hoogstraten after the court found that the balance of probabilities was “that the recruitment of the two thugs was for the purpose of murdering Mr Raja and not merely frightening or hurting him”. Van Hoogstraten reportedly told the BBC that the family would “never get a penny”.

“Is he still in Brighton?” I asked my friend.

“It’s a mystery to me,” my friend said. “Every now and then you hear stories. Some people say he’s in Zimbabwe.”

“Among friends, then,” I said.

“Not any more,” my friend said. “One story is he sold all his assets in this country and put all his money into Zimbabwe because he was so chummy with the regime but they fell out and he lost all his land there.”

By this point, we were passing a bronze statue of the British music hall star Max Miller.

“An interesting place, Brighton,” I said. “Max Miller and Nicholas van Hoogstraten were both equally at home here.”

“Bronze is very colourless for Max Miller,” I said.

Apparently Adelaide is the second biggest Fringe in the world.

And, according to Wikipedia, which is surprisingly accurate on such things, Nicholas van Hoogstraten has been reported to be worth £500 million, “though he has stated that his assets in the UK have all been placed in the names of his children”. His assets in property and farming in Zimbabwe were estimated to be worth over £200 million.

I don’t know what he is worth now or where he is. Nor does my friend.

All I know for certain is that life is tough for dwarfs in Wolverhampton.