My personal experience of the blind bureaucracy of Britain’s National Health Service – which I blogged about yesterday – continued after yesterday’s blog.

I blogged about how I encountered well-meaning bumbling when I had to have my eyes checked at the Ophthalmology department of my local NHS hospital in Hertfordshire.

Later yesterday, though, a friend of mine encountered continuing blind bumbling at the Dental department of Guy’s Hospital in London.

She has had painful problems with a wisdom tooth for, I guess a couple of years. A couple of weeks ago, she was told by a very amiable doctor at Guy’s that the tooth could be taken out but, as it was close to a nerve, they would first have to take a cone beam mandible CT scan to see exactly what any potential problems might be.

It might take six weeks to arrange the scan.

So it was a surprise when my friend got home yesterday night to find a letter from Guy’s Hospital telling her the appointment to have the scan was arranged for yesterday morning.

She had been away from home for a couple of days. 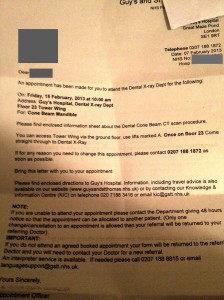 The letter for a scan at 10.00am on Friday 15th February, dated Thursday 7th February, had been sent second class on Monday 11th February. In theory, this should have arrived on Wednesday 13th February. If you trust the Post Office.

My friend was at home on the Tuesday, away Wednesday/Thursday and returned at 2300 on Friday night. She missed the scan appointment at 1000 that day. The letter, we think, may actually have arrived on Thursday, one day before the appointment.

In the minds of the no doubt amiable and well-meaning people creating the letter on 7th February for an appointment on 15th February, that was enough notice. But then the letter was not posted until 11th February. It was sent second class so – even if the postal system worked effectively – it would not arrive until 13th February and there was no thought of someone being away from home on two consecutive days.

So well-meaning people bumbled into incompetence.

At the bottom of the letter, it says: “If you are unable to attend your appointment please contact the Department giving 48 hours notice… If you do not attend an agreed booked appointment your form will be returned to the referring Doctor and you will need to contact your Doctor for a new referral.”

So, even if my friend had received the letter on Wednesday 13th (with the mail being delivered late-morning) she could not have re-arranged the appointment with 48 hours notice.

In some parts of the NHS, of course, patients die because of lack of care.

A couple of days ago Lord MacDonald, a former Director of Public Prosecutions, was calling for police to investigate the “needless deaths” of between 400 and 1,200 patients at Mid Staffordshire Hospital between 2005 and 2009.

My experience in Hertfordshire and my friend’s experience in London are of course – in comparison – wildly trivial. But they are a sign that, even when well-meaning people try their best, the NHS (perhaps like all large bureaucracies) is a mess.

In the case of the NHS, though, it is not just inconvenience which is caused but, in my friend’s case, continuing pain and, in many other people’s cases, death.

My friend phoned the number on the letter this morning and got no answer.

“It rings and rings for ages, then cuts off,” she told me.

So she then phoned the main telephone number at Guy’s Hospital.

“You get a voice recognition computer which asks for the department you want,” she told me, “If you ignore it, it gives you operator. The operator told me the Appointments Department is only open weekdays.”