Becky Fury, a compassion glut in the Calais migrant jungle and a new award 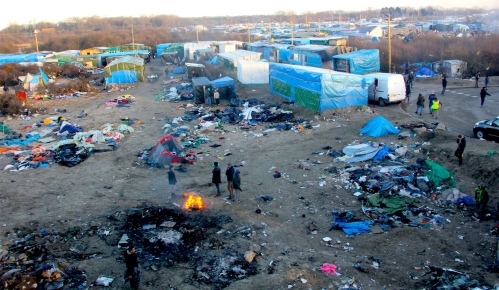 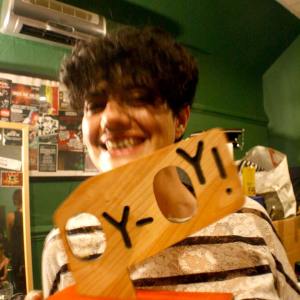 Becky with her Cunning Stunt Award at the Edinburgh Fringe

At the Edinburgh Fringe this year, comedian Becky Fury won the Malcolm Hardee Cunning Stunt Award. But, then, a couple of weeks ago, she got another award.

Last night, she told me: “I did a gig at the Deptford Bird’s Nest which, I believe, was Malcolm Hardee’s old stomping ground.”

“And I arrived,” Becky continued, ignoring me, “and I was greeted with another Malcolm Hardee Award. French Fred and Karen decided…”

“Was she not one of Malcolm Hardee’s acolytes?”

“So almost family,” I said.

“Anyway,” said Becky, “Karen and French Fred greeted me with what is apparently the REAL Malcolm Hardee Award.” 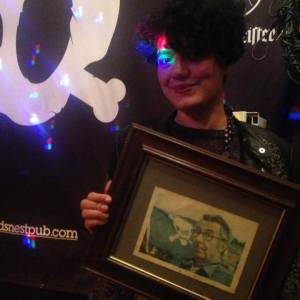 “A framed photo of him. They told me your Malcolm Hardee Awards are just pretenders.”

“They knew you had won the Edinburgh Award?” I asked.

“Because it is so increasingly prestigious,” I suggested.

“Where have you hung this picture of him?” I asked.

“French Fred wanted it back to put in his bedroom,” explained Becky.

“I have a photo of Nicholas Parsons in my bedroom,” I told her.

She just looked at me and said nothing. 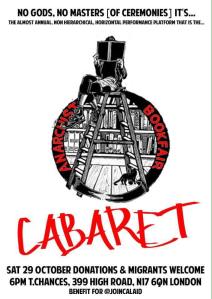 Becky is organising the cabaret part of the Anarchist Bookfair tomorrow.

“I heard,” I told her, “that some people who organised it in previous years were too disorganised for the anarchists.”

Becky looked at me and raised a Roger Moore style eyebrow.

“We are raising money for the ongoing support of people stuck in Calais,” she said.

“Ah,” I said, “you went to the migrant ‘jungle’ in Calais this week, before it got demolished. Why?”

“Because it was interesting. And because a lot of people I know have gone and helped. And a friend of mine was driving there with some stuff. And I’m basically writing stuff for my new show.” 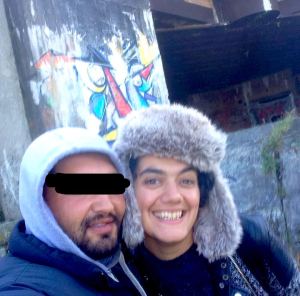 “I dunno if I want to say. But I actually got an amazing story by going there and actually finding out what was going on in the jungle itself.”

“Your friend,” I prompted, “was driving there with stuff. What stuff?”

“Donations. Tents,” said Becky. “Tins of kidney beans. That sort of thing. Also a friend of mine ran the warehouse there. He used to have a sound system – Bedlam Sound System – and he sold it to set up the warehouse.”

“The jungle had a warehouse?” I asked. 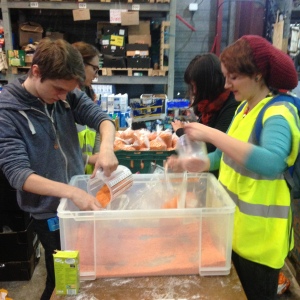 “Two warehouses. I worked in the one that was set up by the sound system squatter collective. I went for four days. I got a lift and I nearly didn’t stay, because the people who gave me a lift were all going to go off and do a squat party in Amsterdam.”

“It was a really unbelievably lovely experience.”

“It was like a distribution point for random acts of kindness. Everyone was there because they wanted to be helpful. It had a really good sense of community.

“I helped in the warehouse for three days but I wanted to go to the jungle and another lift turned up – a guy from London who I knew from years ago. A very rich man. He turned up with his World Music Covers choir. For some reason, he thought that was what people in the jungle really needed. Not tins of kidney beans, not tents, but some white man singing Bob Marley covers at them.”

“That’s OK,” said Becky. “Because he left me there. He left me in the jungle. So I think it’s fair enough to slag him off. This is going in my show as well.” 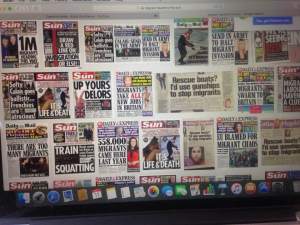 Some of the British newspaper headlines about the migrants

“I was listening to it in the warehouse,” explained Becky, “and thinking: This is really beautiful, very accomplished. But also very white. And there was some level of cultural appropriation. They also did covers from The Lion King… As if these people had not suffered enough!

“I was thinking about all those newspaper stories about rape gangs and aggressive men and thinking: God, we are going to go and serenade them with Bob Marley covers. If they don’t kill us, they should.”

“And the reaction was?” I asked.

“A polite smattering of applause.”

“How many people were watching?”

“Basically,” explained Becky, “some of them couldn’t get away from us because it was set up near the queue for the food. There was no escape. And we also turned up in the Sudanese community where they were all drinking tea and one of the guys there was wearing sportswear with a pair of Nikes and a branded hoodie, looked at this posh white man with an acoustic guitar and asked: Are we gonna make party? Sarcastically.

“This guy who organised it was, I think, trying to impress me with his world music choirs covers band but I had really gone there to find out more information about the place and I started chatting to a guy from Peckham. He had come from Afghanistan when he was 12.”

“So he had suffered,” I said. “First Afghanistan, then Peckham.”

“Yeah. So that’s his home. Peckham. But we (the British) refused to give him a visa so he ended up in the jungle in Calais. He told me: I have fantasies about being stuck on the Central Line. He’s basically a Londoner. He speaks perfect English and even had a South London  twang. But he was stuck in Calais. 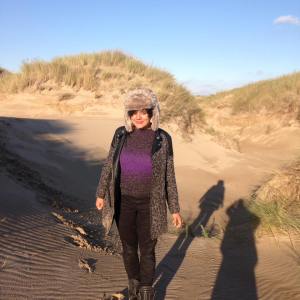 Becky thought: “As if these people had not suffered enough!”

“In Calais, there was a glut of compassion. People in the West don’t have the opportunity to be kind and to be compassionate often enough. In a Buddhist country, you’ve got that in your culture. It’s more engrained. What happened in Calais was basically a glut of compassion where everyone was going there because they wanted to be nice. And all the compassion was re-distributed to all the people coming from all these places having a horrible time, coming to receive that compassion.

“But it caused problems, because the people in Calais didn’t want all those refugees to be in their town because the compassion was not being distributed out properly. If everyone in the West were more compassionate on a day-to-day level, it would be more evenly distributed and everyone would feel better about themselves and you wouldn’t get this compassion clot like in Calais.” 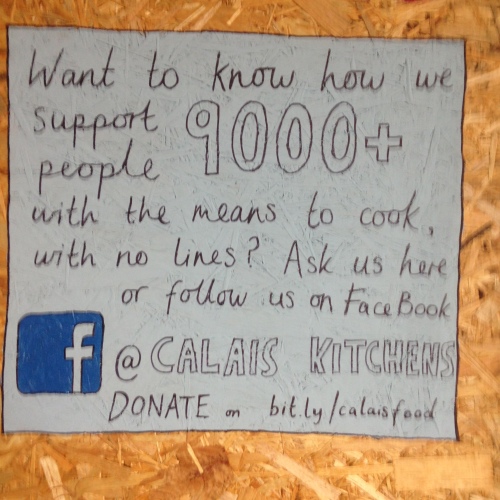