Mr Methane prepares to perform on The Gadget Show with cameramen Rob Shaw and Mark Tredinnick of Mediadoghire.

“According to some factoids that ran during my recent appearance on Channel 5’s Gadget Show, the average person passes wind 15 times a day,” Mr Methane told me last night.

I was staying overnight with the world’s only professionally-performing farter at his home in Macclesfield, north west England.

“I had to road-test these anti-flatulance underwear pants on The Gadget Show,” he told me. “they were called My Shreddies. They’re quite trendy: they look like Calvin Klein underpants.”

“The marketing people aren’t going for the traditional person who might be ‘going off’ (in farting terms) all over the place because their arse muscles have packed up. They’re trying to attract a normal person who is going out on a date and doesn’t want to fart in case it ruins the romance. They can pass wind in confidence. There will be no smell.”

“And they stop the sound of the farting?” I ask.

“So what,” I asked, “is the fart-combatting element in the underpants?”

Image from My Shreddies homepage aims to appeal to buyers

“Some kind of charcoal,” said Mr Methane. “I think if you’ve ‘gone off’ in them a few times, once you wash them, it reactivates the odour-eating properties. The My Shreddies people seemed to be over-awed by the amount of publicity they got from me being on The Gadget Show. They got in touch with me and had some promotional ideas. They were going to make a pair for me in purple and were going to have a picture of me on a train – because I used to be an engine driver. I asked for a very economical fee. But they said I was a bit beyond their budget. It is a classic example of the way people put no value into farting.”

“So you farted and parted,” I said.

“We did,” said Mr Methane. “A few years ago, some company wanted me to do a viral ad for some charcoal biscuits which, again, were anti-flatulence.”

“Did you eat them or stick them somewhere?” I asked.

“You ate them,” said Mr Methane, “and they obviously did something in your intestines. I’m not sure what. Anyway, this guy wanted to do a viral ad so I said: Give us £1,000. That’s not a lot of money for a viral ad. They said they were a small firm, but £1,000 is only £20 a week for a year. If they can’t put away £20 a week for a year, they don’t deserve to be in business. So that didn’t happen either and I’m still open to offers. I think, in terms of doing a viral ad, you’ve only got one chance. Once my bottom is endorsing a particular product, that’s it.”

“British Gas should approach you,” I suggested.

Instructions on how to use The Palm Bomber in reality

“The only thing I have done as a viral ad,” said Mr Methane, “ended up a real bum deal. It was for the Palm Bomber. You know like when people used to fart in their hands at school and throw it at their mates?”

“I think,” I said, “maybe this only happened at schools in Macclesfield.”

“It’s obviously happened in America too,” said Mr Methane. “He’s an American, but his father came from Manchester in England. He spent a load of money making this Palm Bomber thing like a medical pump. Basically, you break wind, you suck up the fart into this rubber surgical container and then you go up to your friend and you ‘palm bomb’ – you squeeze out the fart into his face. It’s on YouTube. (He turned to his computer.) Here it is. Here’s the selling line:

“It is the world’s first and only product that is designed specifically to capture, store and re-release your farts. A patent-pending vacuum-funnel system which easily allows you to capture your farts anytime anywhere with minimal gas leakage.

“This guy had gone to China to get these things made and then had a shitload shipped from China to the US.

“I did an advert for him on YouTube. I did it as a favour. It was one of those mad moments. He said I can’t afford any money, but my dad’s got a paper for ex-patriots in America and I’ll put an advert for you in his paper and blah blah, but he never put it in. It’s just a classic case of people taking the piss.”

“I’m surprised,” I said, “that you haven’t been picked up for some ad campaign.”

“Years ago,” said Mr Methane, “I did a Christmas gig for Saatchi & Saatchi and my manager Barrie kept in touch with one of the big cheeses there and said: I want you to get Mr Methane an advert. You remember that series of Fosters lager ads? – He who drinks Australian thinks Australian. Barrie had this idea of me going into a bar, farting and it empties the bar and then I get my pint of Fosters and the slogan is: He who thinks Australian stinks Australian.”

“I’m surprised they didn’t use it,” I said then, changing the subject: “You haven’t issued a Christmas CD for ages.”

“The bottom’s dropped out of the market,” said Mr Methane. “It has to be MP3s now. And Barrie’s a perfectionist. The amount of time that we put into the orchestration of the songs… the actual production costs are quite high. On the last one, a lot of the guitar work was done by a very famous producer who worked with Britney Spears; he did it under a pseudonym. And, on the track Fucking Hell, My Arse Smells (to the tune of Jingle Bells, Jingle Bells), we got the fiddle-player out of Steeleye Span. He happened to be visiting Barrie who told him he had a country music track and he needed country fiddle on it. I don’t know if, even now, he knows he’s on the album.”

“So no planned albums?” I asked.

“No, but my personal fart greetings are going well.”

“No, I do a video and send it to them. I’ve done three this last week. I did one for a guy who’s retiring from a big American symphony orchestra. It’s going to be a gift to him from the horn section. I do a trumpet piece from Brahms’ Concerto for Something-or-other No 1.”

“And,” I said, “you have a prestigious gig coming up that we can’t talk about because you had to sign a confidentiality agreement. What do we say in my blog?”

“We can’t mention,” I said, “the family name, the location or why this is so jaw-dropping, except you did the same thing 16 years ago.”

“I’m a sort-of semi-regular customer of the British aristocracy,” said Mr Methane. “You’ve been there yourself.”

“I suppose I can say I went with you to a house in Central London 16 years ago.” I said.

“You went to a large, private house,” suggested Mr Methane.

“I’ve was asked to do that Come Dine With Me TV show. I thought at first it was the celebrity edition, but then it turned out it was just a normal one and they were looking for fruitcakes. They wanted someone from Macclesfield who was a little bit different. When I found out it wasn’t the celebrity one and I wasn’t going to have dinner with Keith Chegwin, I lost interest. They said: For some reason, we’ve got a dearth of applicants from Macclesfield and we don’t know why.”

“Who does live in Macclesfield?” I asked. 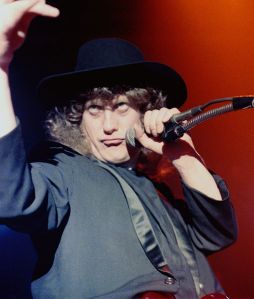 “Noddy Holder???” I asked, “I assumed he lived in some London mansion on the back of royalties from Merry Christmas Everybody.”

“No, he lives in Prestbury, because you sometimes see him in Sainsbury’s supermarket doing his shopping. My mate saw him last year at the Senior Citizens Hall on Duke Street, going to a jumble sale.”

“Are you sure this wasn’t a Noddy Holder lookalike?” I asked.

“No. He was at the jumble sale at Senior Citizens Hall.”

“What was he wearing?”

“My mate reckoned he might have been looking for stacker boots.’

Four days after this widely-read blog appeared, Mr Methane got an e-mail from the Palm Bomber, saying:

I won’t get into details – we’ll call it miscommunication – but the bottom line is that I did not fulfill my end of the agreement, and I’d like to make up for it. I’ve attached the last draft of the print advertisement I’d sent to you – is it still OK to print in the UJ newspaper?
Also, just so you know – we did run a couple Mr. Methane videos and links to your website in the Union Jack Blab (the online newsletter)…hopefully brought some viewers/fans your way.  I’ll forward you the emails shortly…
I didn’t intend to take the piss out of you, I think you are a genuine person and I fancy myself the same.  Hope you’re happy with what we’re doing.

The Palm Bomber’s print advertisement is below: