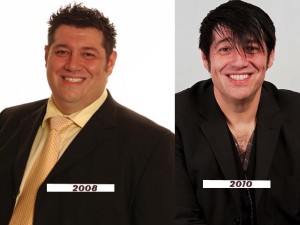 This Saturday is Star Wars Day – May The Fourth be with you – and I am probably going to Stowmarket in Suffolk to see two early Edinburgh Fringe previews – by comedian Juliette Burton and mind-reader Doug Segal.

Both are also performing their shows at the Brighton Fringe next month.

Whether I go to Stowmarket or not depends on the carpet man from John Lewis. Trust me. You do not want to know.

But I had a chat with Doug Segal in case I do not go.

Yesterday, he told me: “Stowmarket will be the first time I’ve ever done an actual ‘preview’ as opposed to a fully-honed show, so I’m packing extra trousers! I’ve already identified a bunch of major changes I’ll be making between this weekend and Brighton – but I’m leaving them in because I want to work on other stuff and I need to try that in front of a real audience.

“The new show is called I Can Make You a Mentalist and premieres properly on 24th and 25th in Brighton, then there are about ten dates around the country, then it runs at the Gilded Balloon throughout the Edinburgh Fringe in August and it tours the country in Spring next year.”

Doug is very successful but does not have an agent.

“I’m really struggling to get an agent,” he told me.

“But you have bookings coming out of your ears!” I said, surprised. We were talking in London at lunchtime; he was on his way to Brighton to play a corporate afternoon show, then he was returning to London in the evening to play another big gig.

“I’m playing big venues,” agreed Doug. “I played York Theatre Royal two weeks ago. It’s frustrating. I’ve got 15% of an on-going business that I’m desperate to give away.

Agents’ problem with Doug’s act is they cannot categorise it

“Agents come along and say: I absolutely love what you do!

“Then they have a little think: Oh! I can’t just put it into the machine, crank the handles and it’ll fall into the normal places. I’ll have to actually think about it.

“Then all of them tell me the same thing: We adore what you do! Amazing! But it’s a lot of work for us at the moment and we’re not sure we’ve got the manpower.

Perhaps that might be because Doug is a better salesman than most agents.

He started off selling space to advertisers in the Today newspaper, the Daily Telegraph and the Evening Standard.

“I left advertising and did corporate after-dinner mind-reading shows for about six years,” he told me. “Then I went off and started a second career doing stand-up comedy and got to the point where I was getting regular paid middle-of-the-bills and the odd paid opener. And then I quit… because the whole point was learn how to make my act funny. So then I had a comedy mentalism act and started doing public shows and that took off beyond my expectations.”

“What first interested you in mind reading?” I asked.

“Well,” he said, “I used to fanny around when I was doing psychology at London University – Birkbeck College – I started doing party pieces. I usually tell people I was taking hard science and perverting it for tawdry entertainment. I also did some acting with a theatre company and I’d been in bands in my teens – from 14 to 19. We supported some decent bands.” 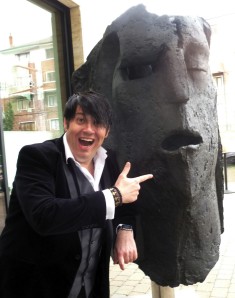 Mind reading? Who knows what is going on?

“So you had a desperate urge to be famous,” I said.

“I had that once,” said Doug. “Now I just want to make a decent living performing. I think Stewart Lee’s model is you want 10,000 people who are prepared, each year, to pay you £15 to come and see a new show.

“So I only want sufficient fame to make that happen. I would hate the level of fame where your life becomes a pantomime played out on the public stage. That would be horrific; I genuinely don’t want that.

“What happened was I had a son really, really young and needed to provide for my family and needed to get a sensible career, so I sold advertising space for newspapers and worked for an advertising agency. I learnt about persuasion, extended my repertoire of party pieces and then I had a client who bullied me into doing a show for a car manufacturer’s conference.

“It went down really well and I thought I could give this a go! I miss being on stage: I’ll give it a shot! And I sold out the Baron’s Court Theatre for two weeks and then things escalated from there.

“I was at quite a senior level in advertising when I left. I was on the board of a major agency: the third biggest agency in the UK at the time. I was one of the first people in Britain to spend money on posters in toilets. And I was one of the ad agency people developing all these LED sites you see on the roadside and in the underground.”

Off stage, Doug is an art connoisseur

“Can I say in my blog that you were very big in toilets?” I asked.

“Only in the context of posters,” replied Doug.

“What are you going to be doing in ten years time?”

“I have no idea. What I wanted to do when I left the corporate world was to effectively have an early semi-retirement. The principle was: Don’t work very often but charge an obscene amount of money when you do. That model worked right up to the Recession.

“Then my wife told me: You need to do a tour. I said No, self-funded public tours lose money. So she said: You should do the Edinburgh Fringe. I said: Absolutely not. It’s a money pit. But she talked me into it and it went really well.

“Last year, I played the Gilded Balloon and the average loss you make at a paid venue is something like £8,000… But, after taking into account accommodation and everything, I only lost £102 over the full run and that was only because I had a bloody expensive screen and TV camera. If it hadn’t been for that, I would have made a decent profit.”

“No,” said Doug laughing, “I wanted to make sure it wasn’t the same old tosh. I’ve really ramped-up the comedy angle and there is a storyline. Things happen dramatically through the show. I don’t just move from one thing to another. There are ‘events’ within the show.

“It’s always been a comedy mind-reading show – there are gags and stuff – but, as well as that, there’s now sketch comedy, animation and music. The sketches I’ve co-written with James Hamilton of Casual Violence and Guy Kelly from the Beta Males.”

“This year’s show,” explains Doug, “starts with a random audience member being chosen and then they do the show. They do all of the tricks in the show. I have this enormous machine on stage called the Brainmatiser 3000. It’s like my TARDIS, I guess. Stuff happens. The narrative of the show gets taken off-track. Unexpected events happen and then get resolved. Lots of physical comedy.”

“But you’re screwed on TV,” I said, “because there’s only room for one mentalist act at any one time on TV and Derren Brown is already there.”

“What I really want,” said Doug, “is for people to come out of my stage show this year and say I have really no idea what that show was. This year’s show is a Fast Show type comedy with mentalism plus a storyline running through. That’s something different. You could put that on screen and it would not be the Derren Brown show.”

The famous repeated mantra in William Goldman’s book Adventures in the Screen Trade is that, however experienced, nobody knows for certain what will work or what will happen… Nobody KNOWS anything.

Ever since I blogged that I only very rarely remember anything I dream, I have been occasionally remembering a tiny snippet of a dream here-and-there. This is partly because I have bits-and-bobs of a cold hanging round my nose and throat and brain and I keep waking up during the night coughing.

Last night, in my dreams, I was at the Edinburgh Fringe in August and bought a cup of tea, but the assistant behind the tea bar topped it up with orange juice instead of milk.

You can never tell what may work at the Edinburgh Fringe – or what may happen.

This year, the London Olympics overlap the first nine days of the Fringe in theory – or the first twelve days in practice, given that many shows start on the Wednesday preceding the official start of the Fringe.

I asked Kath Mainland, Chief Executive of the Fringe, if this was a good or bad thing for attracting audiences to Edinburgh in August.

“Well,” she said, “we’ve been talking a lot about whether that will impact or not. We’ve been doing a lot of additional marketing and moving a lot of marketing earlier. We’ll be doing a lot more in London to counter that. Whether it will have an effect or not, who knows?”

You can never tell what may happen at the Edinburgh Fringe.

Even Doug Segal – who performs an excellent mind-reading act – does not know what may happen in Edinburgh.

Last year was his first appearance at Fringe and he got full houses. His show was in a relatively small venue at the Free Festival, where performers are charged nothing by the venues and the audience is charged no admission but can pay what they think it was worth at the end. It is like indoor busking. And with the same uncertainty.

Doug said he made about £150 each night for his hour-long show and, over the course of the Fringe, broke even. This is a rare thing at the Fringe; most people lose money because of the cost of accommodation, travel and staging/publicising their shows.

You can never tell what may happen at the Edinburgh Fringe.

Not even a top-notch mind-reader.