The U.K. legal system, where you are presumed guilty until proven innocent 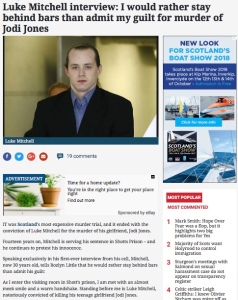 I was reading a piece in Scotland’s Sunday Herald newspaper yesterday. I have absolutely no idea about the true facts or the guilt or innocence in this case, but there is an undeniable truth when the imprisoned guy says:

“The court system and the police, they’re not separate bodies, they’re all part of the state. The justice system isn’t there to protect you, it’s to get the conviction.”

The UK court system is inherently corrupt. It is not designed to uncover innocence or guilt. The police investigate a case and find the person they believe or claim they believe is guilty. That person is then presumed guilty unless he or she can (via an expensive paid advocate) prove themselves innocent or apparently innocent. The court prosecutes the person on the presumption of guilt and a judge or jury decides which of two paid advocates has constructed a better case.

It is a contest and career-building exercise between two highly-paid, trained debaters. The accused person is presumed guilty until and unless proven innocent. It is illegal for any jury member to attempt to check any evidence other than what is presented in court.

The Stefan Kisko case – the clearest miscarriage of justice

The only evidence which can be considered is the evidence of two trainee debaters paid to hide anything which might throw doubt on their own version of events.

Hiding facts is as important as presenting them. Points are effectively awarded for presentation, style, skill and content. The verdict is about which advocate has been a better performer. It is a bit like competitive ice skating with people’s lives, often on thin ice. Or like politics.