It was comedian Joz Norris’ birthday yesterday. I went to his picnic party in a South London park.

He and I met in a toilet a few weeks ago. Accidentally.

We tried to meet up for a blog chat after that, but only managed on the third attempt. By that time, I had forgotten why we were meeting.

“It started in the toilet,” he told me, “and I just thought it would be nice to have a catch-up with you. Your blogs are often just general chit chat. I thought we’ll certainly discuss some interesting things. I’ve got some good things to say about sadness and existence and I could tell you about a film I made.”

“Some nice TV people. Well, not TV. It’s not going to be on TV. It will be on YouTube. It’s not proper. but it might be in film festivals. I don’t know how that works. I just went: Right! That’ll do! Sounds fun.”

“I go to a friend for dating advice because I was writing a lot about that last year cos I was feeling lonely. You saw my show last year: it was just a lonely person bleating for an hour. With some jokes. Anyway, this friend gives me a lot of cynical manipulative stuff like in The Game.”

“No. It’s a book with tips about how to pick-up women. This friend gives me tips and then I try to interpret them. I think I’ve talked about it more than I want to. I actually want to tell you my cool theory about Eleanor Rigby.

Joz Norris; a single guy and all his flatmates are moving out

“Today, a friend of mine asked me Do you ever get unhappy? and I thought about it and then I thought about Eleanor Rigby and it never says in the song if she’s happy or not. It is implied that she’s not because it’s a sad-sounding song but, actually, all it does is describe her life.

“Then I thought if somebody described my life it would sound pretty sad. A single guy and all his flatmates are moving out and he’s going to be stuck in the flat on his own. He doesn’t get to see his family very much. Does comedy. Sometimes reads stories to children for money.

“You could recite that over violin music and it might sound tragic. But I feel quite happy. So part of me wondered if I am really Eleanor Rigby. I was talking to Alexander Bennett about it today…”

“He is a comedian much-hailed by all,” I said.

“Yes. He’s got all sorts of theories on everything and he told me: You’re not Eleanor Rigby. You’re Mork from Mork & Mindy. But I’ve not seen the show, so I don’t know what that means.”

“It means you are like Robin Williams on coke,” I said.

“Alexander,” said Joz, “told me it was specifically the alien bit. I think he was implying I don’t belong.”

“Your flatmates are moving out?” I asked.

When he was 5, Ick-Ack moved to Thailand

“Throughout my life, there has been a pattern of my best friends moving to the other side of the world. Two years ago, my best friend Emily moved to Vietnam. When I was five years old, Ick-Ack moved to Thailand.”

“How do you spell that name?” I asked.

“I don’t know. I couldn’t spell at the time. He was from Thailand.”

“So,” I suggested, “it is not so odd that he moved to Thailand.”

“That was fair enough,” agreed Joz. “I didn’t hold it against him. But, when I was nine, Stephen Opie moved to Australia. Throughout my life, people who I think of as close friends move as far away as it is physically possible to get. Now all my flatmates are off. One’s off to Sheffield. One’s moving to Battersea.”

“There are trains,” I pointed out.

“But this is the point,” said Joz. “Does your life count as a sad life if it looks like it from the outside?”

“That sounds,” I said, “like a variation on Schrödinger’s cat. Logically, you must be sad because you’re always going on about wanting to date girls.”

“Not any more,” replied Joz. “I thought: Oh, who cares about that? I’ve written about that. I fall out of love with every bit of work I’ve done as soon as I’ve finished it. The minute they’re done – shows – I think Right! Done with that! I’m moving on! I feel like everything I wanted to communicate with it is done. I never look back on them and think: What an amazing show that was! I just look back and think: Oh, I’m done with that.”

“I think so,” he agreed. “It’s better than always obsessing over your own mythology. If I were to pretend I had a mythology, then I think there would be something wrong with me.”

“I think,” I told him, “that maybe you should have a mythology. Women with snakes in their hair.”

“That would be nice,” he replied. “I wouldn’t mind that.”

There is a clip on YouTube of Joz fantasising about divorce.

“Have you given up dating?” I asked.

“I certainly haven’t done it in a long time. I think I’m gradually ruling out all the things people can achieve in their life and I don’t know what I’m leaving for myself. Though I’ve not ruled out marriage. That one’s still there.”

“What,” I asked, “are the other things you have said No to?”

“I don’t think I’m going to buy a house. Mainly cos of the money. Though I made a lot of money this year. I did an advert for Tuborg – the Dutch beer – in Cape Town.”

“Is it for the South African market?” I asked.

“No,” said Joz. “The weird thing is it’s for Eastern and Central Europe and Russia and The Balkans but made by a French advertising agency for a Dutch company – Tuborg – and filmed in South Africa with British actors and an American director. It was great. I got to climb Table Mountain with a stomach bug. It makes you feel you’ve achieved something when you’ve done it feeling that ill. 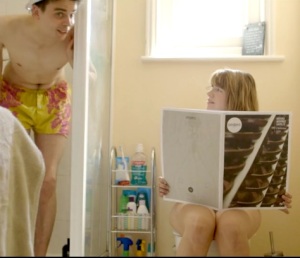 “Oh – and do you remember in February you blogged about a web series that Zuma Puma and I were in – The Backbenchers? Well, I’ve won an award for it – I won Best Supporting Actor at the LA WebFest.”

“Congratulations,” I said. “Did you get a trophy?”

“No,” said Joz. “They’re going to send me a certificate in the post. At the moment, they’ve given me a picture of some leaves with the word WINNER written in-between.”

“Sorry,” I said, “I think I just accidentally spat at you.”

“Do you ever,” asked Joz, “do that thing where you yawn and just spit comes out?”