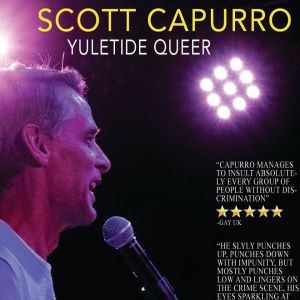 I have been getting a flurry of automated emails about comedian Scott Capurro’s shows in California.

So, because I think of him as being London-based, I FaceTimed him a couple of days ago in San Francisco.

“I produced a show here,” he told me, “so I’m on this thing called Eventbrite and they send out a reminder every day of the show.”

“Where are you staying?”

“I’ve had this apartment here for 25 years,” he told me. “My husband, Edson, likes it here; my family’s here; and I’m trying to decide where we should live. London is easier for me in a lot of ways. I own a home there whereas, a renter in San Francisco has fewer rights. Also, there’s so much work in London and I can work all the time. Here, I’m on a local radio show in San Francisco. I’ve been on it for 17 years; I come on once a week.”

“It’s morning radio in America. So it’s Hey! Puppies! Kitties! Let’s talk about celebrities! It’s like Italian girls in the 1950s: all we talk about is celebrities and our pets. Seriously. I love these people, but we are penned-in on what we can talk about, especially me.”

“It must be difficult for you to be squeaky-clean?” I asked.

“No.” Scott told me, “I do morning TV in Britain all the time. I do The Wright Stuff a lot. I love it and I really like Matthew because he likes comics. I’ve been doing that for eight years and I know I sometimes push it, but I’ve never been in trouble, really.

“Also, I started on radio in college. I kind of understand the limits of it and I can be clean if necessary. When performers perform live, the expectations are different. I was really into stand-up as a kid and I would hear rumours that these comics I saw on TV were – Oh! If you see them live! Oh my God! It’s so shocking and different! My mother would say: Oh my God! Red Foxx! The things he says about women, live! He seems so nice! and that really intrigued me. The idea that, when you perform live, it’s like Jekyll & Hyde: you are someone else.”

“So,” I said, “at the moment, you are doing radio and live stage shows in California.”

“I do my own stage show,” said Scott. “An hour or an hour-and-a-half in different venues. And I make more money per show doing that here, but the production stuff is a lot of work. I work less often and make more money here but it’s harder work than in Britain.

“In a way, if you’re a comic in London, you can be lazy and make a decent living. You just show up and do your 20 minutes. You are not expected to do anything other than hit a home run when you’re on stage.

“I have been playing the (London) Comedy Store more the last two years and it’s so hard to fail at the Store. I mean, you’re only on stage really for 18-20 minutes and people walk in there assuming they are seeing the best. So they’re on your side although, if you fuck up and lose them, it’s impossible to get them back because you’re only on stage for 18-20 minutes. It’s a bit tenuous if you mess up, but messing up there is almost impossible on a weekend.”

“It’s maybe easy for you,” I suggested, “because you are so professional.”

“It’s not easy,” said Scott. “But it’s hard to fail. If they hire you, it’s usually because you’ve been doing it for a while and can do 20 minutes without failing. And I also play a lot at The Top Secret Comedy Club on Drury Lane, where my husband runs the bar – it’s like an Edinburgh venue but well-run and clean. The guy who runs it – Mark Rothman – is a performer so he can get big names at the weekends.”

“Is Edson with you in San Francisco?” I asked.

Scott Capurro (left) in London with his husband Edson

“He’s in Brazil, with his family, but I’m going there in January, then we come back here and then I go to Australia from February 22nd to March 5th.

“Then I’m doing a solo show on March 25th at Blackfriars in Glasgow and hosting and appearing in other Glasgow Comedy Festival shows over that weekend. After that, I’m going to Berlin for a week. I did one show there two months ago and they’re bringing me back for a week. April 18th to the 23rd.”

“You can probably see the excitement on my face,” I said. “Why were you banned?”

“In the 1990s, I had been going to Australia for a while and really liked it. then my management made me stop, because the trip is really long and they didn’t want me there that long.

“But I was invited back in 2001, so I went, and I was really excited because, at that time, Ross Noble was going over a lot and Stephen K Amos. I thought: Oh this will be fun because I’ll see my friends and maybe I can start spending time in Australia, because it’s pretty and it’s nice during the winter and it might be a good outlet for me writing good stuff. I could get established in Australia.

“Are you sure you don’t want to see the stand-up in rehearsal?” Scott asked them.

“So I arrive in Melbourne and they say: Oh, we want you to do a live TV spot right away! OK, fine. It was a live programme called Rove, which is like their Tonight show or Jonathan Ross. There was going to be an interview, which they cut but there was also stand-up too and I said: Are you sure you don’t want to see the stand-up in rehearsal? – They said: No, we don’t want to see it. We’re fine.”

“Yeah,” replied Scott. “So I sent them the script. I was just going to do the first seven minutes from my Holocaust, Schmolocaust show…”

“So,” said Scott, “I objectified Jesus and jacked-off to Jesus a bit, but I didn’t get my cock out. I just did the hand motion.”

“Were you jet-lagged from the journey?” I asked.

“I was terribly jet-lagged because I had come from England, but also I had been to a party with the TV executives right before the taping of the show. I showed one of the execs this joke and he said: You’ll be fine. It’s after the watershed.”

“And what happened?” I asked.

“They got 300 calls, which was a lot for them and they freaked out and they went to the press and it became this huge thing where they tried to pull my stage show from the Melbourne Comedy Festival and the Cardinal of Melbourne had me banned… Yeah… It became this thing where, apparently, I had made jokes about raping the Virgin Mary – which I didn’t… I mean, if I’d had them, I might have, but I didn’t have those jokes, so… It became a myth is what I mean.

“Now there is a word over there – Don’t pull a ‘Capurro’ on us on TV – Don’t go out there and do something you didn’t say you were going to do. Don’t fuck us. Apparently some people got fired. Anyway, I never got invited back.”

“It all seems a bit unfair,” I said, “if they saw your stuff on paper before the show was transmitted.”

“I think once the shit hit the fan, the network decided…”

“I think once the shit hit the fan, the network decided to run with it to get press for the show and didn’t care about me. And, I think, because my management wasn’t in Australia and wasn’t there to help me, I was left to my own devices. I tried to fix it myself and I think I might have fucked it up even more.

“Then a couple of writers from Australia contacted me and said: You should come back. But I couldn’t find anyone who would produce me. Then the Comedy Store said they would, but it took three years to get a date. Now I’m going over to Sydney for two weeks to play the Store and we will see. They might hate me.”

“Well,” I told him, “the good news is you are bound to get interviewed again after that back story.”