The decline of British television comedy. The elitist iceberg of Brexit and Trump. 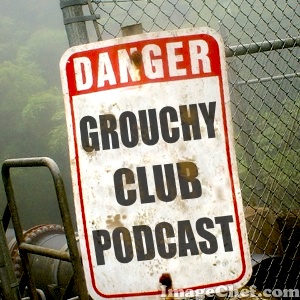 Below is a short extract from the 100th Grouchy Club Podcast in which the (yes she certainly is) controversial comedy critic Kate Copstick and I ramble on about anything that takes our fancy, occasionally stumbling into the subject of British comedy. Occasionally, too, we stumble into cyber-trouble.

This may be one such example.

JOHN: There is a sort of bizarre snootiness in comedy where the Oxbridge elite…

JOHN: …who, by-and-large, don’t get (big) ratings for their shows – are very snooty about people who do get ratings. For example, Benny Hill.

JOHN: He was staggeringly popular. I heard that when he died – I dunno if this is an urban myth – Chinese television broke into their broadcasts to announce it as a newsflash.

JOHN: But I mean he was staggeringly popular. They didn’t like him because they said he was sexist.

COPSTICK: But I think that… I’m going to get a bit political here, John…

JOHN: Oh God! We’re going to be in trouble!

JOHN: That’s never stopped her before.

JOHN: This is Copstick!

COPSTICK: …the people at the top are completely unrepresentative of the mass of the voting iceberg that is underwater. And somehow, when the bottom mass of the iceberg rises up and votes for Brexit or Trump, it’s all Oh! Shock! Horror! How can this have happened? Well, it happened because it was always there. You just weren’t listening to it.

JOHN: … because, in my youth, the sitcoms got massive ratings and now the humour, the comedy is not getting big ratings because it’s being scheduled and programmed and decided on by people who don’t like what the public like.

COPSTICK: Which is why Mrs Brown’s Boys is the highest rated…

JOHN: Yes and that’s only on at 10.30 because he keeps saying Feckin’ or something, doesn’t he?

JOHN: I saw one episode and thought: Oh, that’s not really for me. But, of its type, it’s well done. I mean, Mrs Brown’s Boys and My Family must be, recently, the biggest sitcoms on…

COPSTICK: Absolutely. And surely somebody somewhere in some television company must see that.

JOHN: There is a lot of Emperor’s New Clothes going around.

JOHN: I have to say Vic & Bob – sorry – I never ever thought they were funny. There was one pilot for, I think, Granada, which I saw and liked: it never got made into a series because no-one else liked it, but I have never ever ever thought Vic & Bob were funny. They were always in minority slots and, when the BBC I think it was tried them at peak time on a Saturday night they came a phenomenal cropper. With good reason. Because they ain’t funny… (LAUGHS) …in my populist opinion! (LAUGHS) But what do I know?

COPSTICK: I have almost stopped watching comedy on TV because there is very little that appeals to me and makes me laugh.