In a blog here at the end of April, musical comedian and Malcolm Hardee Comedy Award winner Robert White explained why he had entered Britain’s Got Talent this year.

After winning most public votes from viewers in his semi-final appearance, he is now through to the live Sunday night final tomorrow on ITV1.

It seemed the right time to ask him why he seems to have such a wide appeal.

So I asked him… 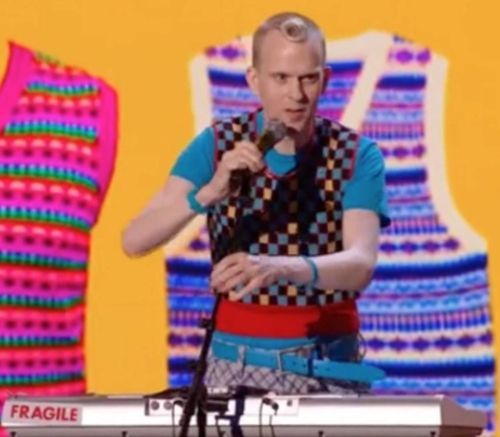 JOHN: After your song on the semi-final, your mother now definitely knows you are gay.

ROBERT: Yes and gay comedians have been my idols since I was young. There’s a sort of gay sense of humour you have if you’re camp or an outsider. I know Britain’s Got Talent has a massive gay following, a massive musical theatre following.

My song had a particular gay slant to it. We all have a particular relationship with our parents and I think it was maybe a song that other gay people found an empathy with.

JOHN: You said you had gay idols. For example…?

ROBERT: One of the people I looked up to and look up to is a guy called Mark Bunyan, who I think was the first openly gay performer at the Edinburgh Fringe. If you listen to the sort of songs he did then, they are about the same sort of level – or tamer – than the stuff I’ve done on Britain’s Got Talent.

JOHN: You write songs with intricate lyrics. But you are dyslexic. That must be a bit of a problem.

ROBERT: Well, since I was a kid, it has been easier to make stuff up than to read it. I can read and write music and lyrics but, by the time you’ve sat down and got the end of the line, you could have played most of it by ear anyway.

JOHN: Any creative genes in your family?

ROBERT: My granddad – Samuel Thomas – was from Wales and he was a massive part of my life. A lot of my comedy comes from him. He was from Bleinavon – he was eccentric and intelligent; he was self-taught; he was told he could have been a teacher but he wanted to go and spend time down the pits with his brothers. His father was a band leader and he himself played the euphonium and the cornet. All my music comes from him. He was this crazy, eccentric musical genius: a brilliant man.

I’m regularly in Neath: there’s a lovely comedy festival there. I do gigs in Cardiff, Aberystwyth, all over.

One thing I remember about doing my first gig in Wales was when I first got heckled. The words were nasty, but the accent itself just reminded me of my granddad. So I sort-of can’t be effectively heckled in Wales because it just reminds me of this lovely Welsh voice that used to tell me stories when I was a child.

JOHN: But now you’re a Londoner…

ROBERT: Well, I have adopted London. At the moment, I live in Mile End, but I’ve lived all over London – Brixton, Kilburn, Willesden Green, North, South, East, West. London has done for me what it has done for a lot of people. It has made me who I am. I was born in Sussex – born in Crawley, brought up in Horsham – but made in London..

I had a police escort when I was born. My dad was on his way to Crawley Hospital with my pregnant mother, could not find the entrance, stopped by the side of the road, was spotted by a policeman and I got a police escort to the hospital.

JOHN: That sounds a suitably bizarre entrance to the world for a gay, dyslexic, Aspergic, quarter-Welsh, web-toed performer.

ROBERT: Things which used to be classed as disabilities are now accepted and I think that’s very positive.

500-1,000 years ago, people who were left-handed were being called witches and branded as outcasts.

Now these things are accepted. By highlighting them, what I would like to do is make them be seen as normal. They are not exceptional; they are just different.

JOHN: Which brings us to the fact you have web toes…

ROBERT: When people ask me about my web toes, I try to ‘duck’ the question. My nan had webbed toes as well. Quite a lot of people have it. Anne Boleyn had a sixth finger and it may or may not have been webbed.