A couple of nights ago, I went to a ‘workshop’ on dreams.

We sat round in a circle and exchanged dreams.

This was a problem because the reason I am interested in dreams is that I never remember mine.

Maybe once every eight months or so I wake up and remember one. But it is rare. Which I told the other people at the workshop. It cannot have been good news.

I think I am interested in the surreality of dreams because I never took psychedelic drugs. As I have mentioned before in this blog, the only drugs which ever appealed to me were LSD and heroin. Neither was available to me when I might have taken them.

By the time LSD was available to me, I had met and read about too many acid casualties to take it – I thought it might tip me over some psychological edge. And, for me, heroin is a bit like suicide: you would have to be in the right mood to start it and moods pass.

The only two dreams I have ever remembered properly were nightmares rather than dreams.

Around puberty, I had a recurring dream with a rhythmic, repetitive, increasingly-loud droning sound and there was a box which I knew I should not open but which I felt compelled by the rising, droning sound to open. I never opened it but, each time I dreamed the dream, I got more and more frightened by the rising droning sound until I woke up.

It was some sort of puberty fear dream triggered, I guessed, by the droning sound of a plane flying overhead during the night. Except I don’t think there were any planes flying overhead at night.

In the other dream I remember – and which woke me up with fear – I was me but also someone else and I was running across a flat, open grassy area lit by street lights outside a house at night-time, being chased by a man with a knife who caught me and then killed me. The killing was very physically detailed and vivid.

Around a week later, I read very belatedly about the Charles Manson killings in Los Angeles and that was eerie, because I calculated I had had the dream around the same night the killings took place.

Except, of course, that I don’t think any of the victims were killed outside… and the UK is seven or eight hours ahead of Los Angeles, so a night-time killing in LA would happen when it was daylight morning in the UK.

So linking the two was a fantasy layered on top of a nightmare.

Inevitably, having said I don’t remember my dreams, I woke up this morning and remembered a dream. But only part of one.

And now I have forgotten it except that it had something to do with me having a dream (within my dream) of writing a blog about dreams when I woke up in the morning. 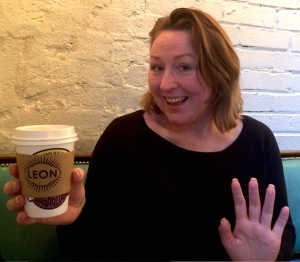 No prizes for guessing where Amanda and I met last week…

The last time I blogged about my actress/film-producing namesake Amanda Fleming was in October last year when she had just produced and directed short film What a Drag.

What a Drag has now been accepted into 15 international film festivals this year, including Cannes.

Amanda was at Cannes last year too – as an actress and facilitator representing a 26-minute short she acted in: Titans of Newark.

After Cannes this year, she is probably returning to Los Angeles.

“I want to set up a Theatre In Education company over there,” she told me.

“What other projects are in the pipeline?” 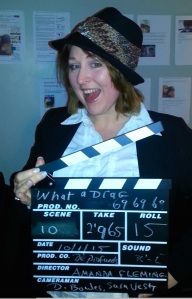 Amanda Fleming directed What a Drag!

“When I go back to the States, I’m going to put on The Countess, the one-hour show about Countess Báthory. I was thinking about doing it as a movie, but then I thought: D’y’know, I might put that aside and stage it at the Los Angeles Fringe. Because I want to do something a little more gritty. I was going to do a 10 or 15 minute comedy horror film to begin with – The Fingernail That Never Grew – a sort-of Carry On spoofy Hammer.”

“You seem partial to a bit of Gothic horror,” I said. “You must have interesting dreams.”

“I’ve always had very vivid dreams since I was a very young child and, when I was 18, I started writing them down. Now I’ve got about 280 written down. Some are just a typical dream mishmash of what’s happened in your day and your brain is sorting it out. But there are others that, when you read through them, it sounds like a really, really good storyline. Some are supernatural; some are emotional.”

“Next week,” I told her, “I’m going to some Dream event, but I almost never remember my dreams. I wish I did. Can you string your dreams together to make a single narrative?”

“Yes,” said Amanda. “Or it could be a feature-length film of short Gothic horror stories.

What a Drag! – at Cannes and 14 other international festivals

“Last year, Titans of Newark got picked up in Germany and I think China.”

“Would you prefer,” I asked her, “to make an anthology of your dreams rather than a single narrative?”

“If it was a single narrative,” laughed Amanda, “people might think: Is this person off her head? Some the stuff: you’d think I was on drugs.”

“Non-naturalism is perfect for a film, though,” I suggested. “If you’re in the area of bizarre, surreal horror anyway, then the more visually ridiculous the better.”

“I had a recurring dream,” said Amanda, “of a black panther in a tree. It was always round a corner. I had to try and go round – it was like a forest – a little cottage on the side. And I had to go round there and every single time – even though the panther would disappear – I would know it was there and then I could see its eyes and then the full body would appear and it wouldn’t let me pass until, one day, he did. 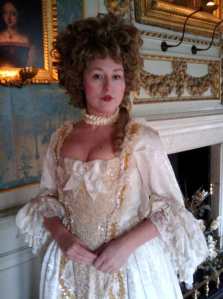 Not bad progress for a girl from Rochdale

“And another dream was about a white house on a hill. That was one of the most terrifying dreams I’ve ever had. It was a recurring one and the fear I used to feel from dreaming that dream was unbearable at times. It would wake me up.”

“I got closer each time I had the dream,” explained Amanda. “Each time I used to see, when I got closer and looked up at the house, the silhouette of a woman in the house, looking out of the window.”

“Sounds a bit Psycho-ish,” I said.

“You know those old Victorian houses,” asked Amanda, “where they used to have a huge greenhouse? – like a big hothouse and the lady of the house would go in there and water her plants – it was beautiful, domed, but long – and the main bedroom, which was hers, there was a door which went onto a balcony overlooking this huge hothouse. But I didn’t get to that point until just before the dreams stopped.

“Eventually, when I finally managed to pluck up the courage to open the door, I walked out onto the balcony and it was almost like an invisible force was trying to push me over it.

“The next time I dreamt that same dream, I went back onto the balcony again and I felt a strangulation round my neck. Then, the next time, there was the strangulation AND I felt like I was being pushed over the balcony. But, as I was seeing this happen in my dream, I also saw there was a rope hanging above the balcony and I realised whoever I was dreaming about had been murdered and hung there.

“That dream was terrifying because it was recurring. I was so scared of going back to the house every single time. I still remember how it looked. There was a narrow road with a brook running beside and I remember a small pub and a grove with trees and then you could see the white house on the hill.

“And I’ve been writing poetry since I was 12. I’ve got all those – over 500 poems. I’d like to put them all together with dates at the top and collect them in a book. If it makes money, that’s OK; if not, that’s not an issue.