Maybe the Scottish Nationalists should move the border south into England?

Nicola Sturgeon: the UK party leader who is most trusted by English voters

There is a General Election in the UK today.

Last night, I overheard a conversation at St Pancras station.

“Why do you vote for the Conservative Party?” one man said.

“I could never vote for the Labour Party,” said the other man, “because socialism isn’t a political philosophy; it’s a religion. You have to believe that, if you follow the true path and all the rules of the religion, then all the wrongs of the world will be solved like the wave of a magic wand.”

“But,” said the first man, “Labour is not a socialist party any more.”

Who knows what the result of the Election will be?

The polls say a hung Parliament.

Personally, I suspect there will have to be a second Election this year.

I have jokingly said to people in the last week that, if the SNP had put up candidates in England, there would have been a landslide for them, given that the SNP’s Nicola Sturgeon is (according to polls) by far the most trusted party leader among English voters. 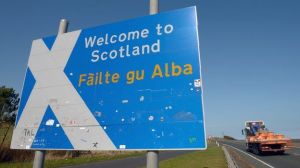 Welcome to Scotland – but maybe the border might move?

But, in all seriousness, I do idly wonder what would have happened if the SNP had put up candidates in Berwick-upon-Tweed, Carlisle and Newcastle.

In 2008, an apparently very well conducted ITV poll showed that a large majority of people living in Berwick-upon-Tweed wanted the town to be in Scotland not England.

When I was there a few years ago, the streets had Scottish banks, Scottish gas, Scottish electricity and the predominant currency used in shops seemed to be Scottish not English bank notes.

Admittedly there is ‘a bit of previous’ with Berwick see-sawing between the two countries in the past.

Danelaw and Northumberland held power in 878

But my local optician, a clear-sighted man, comes from Carlisle and he told me there was quite strong support – even if only theoretical – for Carlisle too being in Scotland not England.

With Newcastle and Geordieland in general, it would be more interesting. That area is almost defiantly proud of its separateness from the English South and it could be argued it is far closer culturally to Scotland than to Anglo-Saxon England.

Historically, in Britain, the north was Scandinavian; the south was Anglo-Saxon German. Although the Normans too, of course, were Scandinavian.

Northumberland originally stretched from Edinburgh down through Newcastle and south of Durham. The Danelaw took in a very large swathe of what is now England.

There has been an awful lot of talk about how the Labour Party could come second in this election and still gain power – with SNP support. There has been almost nothing about what would happen if you removed Scotland from the figures entirely.

As I understand it, if Scotland gained independence, the Labour Party would never again be likely to get power in what was left of the UK because, by removing Scotland’s 59 seats, Labour’s voting numbers would be scuppered.

There is an interesting scenario that the Labour Party would have to woo the SNP to gain and maintain power but, in thus gaining power, it would destroy itself.

Meanwhile, for no particular reason, here on YouTube is the result of the 1992 General Election vote in Greenwich. Comedian Malcolm Hardee stood in the election solely to get a free mailout publicising himself and his Up The Creek Club to 10,000 people which would normally have cost him over £3,000 in postage alone. All he did was lose his £500 deposit.

He is standing behind the right shoulder of the Electoral Officer who announces the result.