Commenting on my blog, Stuart’s reaction was: “I thought this was an isolated incident, but I’m genuinely disturbed by how many people have come forward and said they’ve had copy disallowed for reasons of ‘taste’, ‘decency’ or ‘house style’. This was the Edinburgh Fringe we were talking about – What’s happened?!”

And it remains a mystery. And it is not alone. Australian comedian Jon Bennett is performing his first Edinburgh Fringe show PRETENDING THINGS ARE A COCK at the Edinburgh Fringe this August.

This morning, producer Bronwyn Hooton told me: “It’s baffling to think that the Edinburgh Fringe – the largest fringe in the world – is censoring the art forms that appear within it, when your own Commonwealth countries do not.”

The Edinburgh Fringe, this year, seems determined to become a laughing stock world-wide, not just in Britain.

Bronwyn continued: “The welcome video on EdFringe.com says: The Fringe was created 65 years ago when eight companies who hadn’t been invited to take part in the international festival, in the true show-business tradition and in a flash-mob style decided to stage their work anyway. On a tradition of open-access and freedom, to have censorship issues from the Edinburgh Fringe Office themselves seems to go against this ethos they claim to abide by.”

The word ‘cock’ in Pretending Things Are a Cock had to be censored (to ‘c*ck’) on the image used in the Fringe Programme because the word was deemed to be offensive, though the image itself (see above) was not.

I could barely believe my eyes when I saw this censored image.

But it is a very nice asterisk and, obviously, it has made a big difference.

Has the Fringe Office got their kn*ckers in a twist and gone completely mad this year?

Well, yes, apparently it has.

The Chortle comedy website yesterday pointed out that, printed in the upcoming Fringe Programme will be “a show called Molly Wobbly’s Tit Factory, which has escaped the blue pencil, comic Chris McCausland has been allowed to use the quote from a Chortle review ‘balls-out funny’ and a show called Sex Ed: The Musical contains the blurb: Have you ever tried hand-to-gland combat? Playing the clitar? Spelunking? Have you ever been vaginally tardy?”

Writing in his blog yesterday, Richard Herring pointed out that Kunt and The Gang’s name is acceptably print-worthy to the Fringe Office, as is Reginald D.Hunter’s show title Work in Progress… And Nigga (Reg has a tradition of putting Nigga in his titles) and that, indeed, in Richard’s own Programme entry, the Fringe Office took no exception to the phrase “the yoghurt-spitting sausage” but, somehow, ‘cock’ was too much for them to swallow.

Comedian Jody Kamali commented that the Fringe Office “said I couldn’t use three dollar signs in a row ‘$$$’ in my Fringe entry, as it didn’t fit their ‘house style’.”

Also, following my blog yesterday, Chortle phoned the Fringe Office and reported that “when asked why certain words are deemed offensive and others not – and how Herring’s title was changed without him knowing until now – the Fringe office said they did not wish to comment.”

No surprise there. But there was a surprise that – several weeks after the final deadline had past – the Fringe Office told Richard Herring yesterday that his very expensive quarter page ad in the Fringe Programme was suddenly also unacceptable. He was told that he would have to disguise the word ‘cock’ by removing the letter ‘O’.

In his blog yesterday, Richard wrote: “I wonder will the Fringe brochure people object if the “O” of cock is… hidden behind a big splurge of dripping white liquid… (it) might be allowed because a splurge of white liquid is not on the list of rude words.”

The two substitute censored versions he submitted to the Fringe are below: 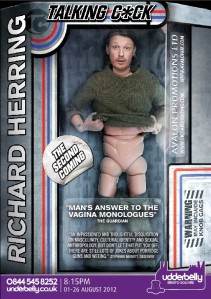 “Talking Cock” – censored with an asterisk

“Talking Cock” – censored with a splurge

Presumably, the Fringe Office objected to Richard Herring’s ‘cock’ because of what they perceived as the use of a genital word (even though the common phrase Talking Cock is not sexual in origin).

However, they had no objection to a review quote on the ad, which says:

“Man’s answer to the Vagina Monologues – The Guardian”

So, apparently the word ‘cock’ (in the context of the non-sexual-origined phrase Talking Cock) is unacceptable but the word ‘vagina’ (which has a solely genital meaning) is completely acceptable.

“Whilst I acknowledge there is a point where some choice has to be made over what is suitable to go into a general publication, I am concerned about the draconian level of censorship that is occurring here and what it says about what the Fringe is turning into. This should be the last place where freedom of expression is clamped down on.”

Or, as Richard said to me: “Underneath the silliness and twatdom it’s a very important issue”.

What on earth is going on?

One thing is certain. There is no point asking the Fringe Office.

Yesterday, I blogged about problems over free shows at the Edinburgh Fringe and quoted one of the most prominent free performers, London-based American comedian Lewis Schaffer.

He crops up in quite a few of my blogs.

I like to have subsidiary characters and plot threads running through my blogs so that anyone regularly reading the blogs can – or, if I were to turn them into an annual e-book, anyone reading the chronological collected blogs could – follow these threads as they develop.

I recently encouraged Lewis Schaffer to start his own blog, which means he occasionally mentions me in his blog.

I aspire to being a subsidiary character myself.

Yesterday, in his blog, Lewis Schaffer wrote about his show the previous night (pay attention, dear reader): “My personal blogger John Fleming was there last night with the ‘un-named’ woman who makes his presence bearable – actually he is a welcome sight for anyone who wishes to be loved and accepted as an artist.”

The other slightly odd thing Lewis Schaffer wrote in his blog yesterday was: “Peter Goddard – the man whose hair I was stroking – he’s a nice guy – told me afterward that I had the audience laughing many times but stopped them as if I didn’t like them enjoying themselves.”

Stroking a man’s hair during a gig where the comedian tries to stop the audience laughing may seem odd enough but what, you might ponder, is with the odd sentence construction: “Peter Goddard – the man whose hair I was stroking – he’s a nice guy – told me…”??

Well, this goes back to two nights ago, when I saw Lewis Schaffer’s ongoing twice-weekly show Free Until Famous in London’s Soho.

There was a man there who laughed throughout. It turned out he was this Peter Goddard.

After the show, Peter Goddard, his female friend, Lewis Schaffer and my eternally-un-named friend had a meal in Soho and Peter Goddard decided he wanted to sponsor the publicity  costs of Lewis Schaffer’s Edinburgh Fringe show in August.

Peter Goddard had thought the whole idea through before he came to the gig.

The only thing he wanted in return was that a picture of his head and his hand giving a thumbs-up sign should appear in the corner of every flyer and every poster for Lewis Schaffer’s show with the slogan “PETER GODDARD – HE’S A NICE GUY!”

“Being in your show tonight,” said Peter Goddard, “was like sitting INSIDE The Office as opposed to sitting at home, watching The Office on TV. If you watch The Office on TV, you can laugh. If you were actually sitting inside The Office itself for real, you wouldn’t laugh. It would be very uncomfortable. Imagine going to a comedy club and not being sure if the comedian was David Brent or Ricky Gervais.”

That was what Peter Goddard said. And that was why he had enjoyed Lewis Schaffer’s show so much.

“What do you get out of it?” Lewis Schaffer asked Peter Goddard.

“It would have to be a photo of you with a cheesy grin,” I suggested, “like you were recommending a hamburger or a washing machine in some naff 1950s ad.”

“You just say,” I suggested. “Peter Goddard – He’s a nice guy… That’s all I am contractually allowed to say.”

“What do you do?” Lewis Schaffer asked Peter Goddard.

Afterwards, I asked Lewis Schaffer, “How long have you known him?”

“I’ve met him twice but I only remember meeting him once. Maybe more. But I don’t remember. I don’t know why he chose me.”

I opened my mouth to say something.

“It’s a great idea,” I told him. “It will get you attention and get your posters and flyers talked about, like Cockgate. Well, not quite as much as that.”

Lewis Schaffer pondered this for a few long seconds.

“Yes,” I told him. “It’s at least worth two-inch pieces in three or four newspapers or magazines during the Fringe.”

We said nothing for a few long seconds.

“Even saying No comment to 5,000 people would drive me crazy,” he said. “I want to be talking to them about Lewis Schaffer.”

We said nothing for a few long seconds.

“But,” I suggested, “maybe you don’t get people with disposable incomes taking the MegaBus. Are they your target audience for comedy shows where you want people to give you as much money as they can at the end of the show?”

“You’re not going to see famous people take the coach,” said Lewis Schaffer “£1 Until Famous… In New York, I got free Oliver Peoples glasses for travelling by bus. They are the glasses of choice of American psychos.”

“Have you stopped drinking?” I asked Lewis Schaffer.

“What about Peter Goddard?” asked my eternally-un-named friend, as the three of us walked through Soho.