Derren Nesbitt on Frank Sinatra, being blinded on a movie and £43 million

Yesterday’s blog was the first part of a chat with Derren Nesbitt, star of the new movie Tucked, which was released in the UK yesterday.

But there is more to him than merely being an actor. Now read on…

JOHN: You were saying your father, after he stopped being a comedian on the music halls, got in involved in all sorts of businesses…

DERREN: Yes, we had a huge house in Avenue Road, NW London. And a Rolls Royce.  My father just wanted one. He couldn’t drive. I used to drive. I had learned to drive on a Mini Minor. Julian Glover once told me: “We could never understand you arriving at RADA in a Rolls Royce.”

Derren Nesbitt as Major von Hapen in Where Eagles Dare

JOHN: You built your own career, though. Famously, you were a very nasty Nazi in the Clint Eastwood/Richard Burton movie Where Eagles Dare and there was an accident…

JOHN: Which one went wrong?

DERREN: The chest. I was always wary of the special effects man, because he had a finger missing!

They put two condoms full of blood on my chest with a metal plate (to protect the skin). We had five jackets for five takes and eight loads of condoms had exploded and splattered blood over the first four. So we got to Take 5… I was very cautious by this time… and when the explosion went off, it went KAPOW! and it looked like I had been hit by a bazooka. It went in my eyes and they took me to Denham Hospital, trailing blood, with a perfect bullet hole in my forehead and said: “He’s had an accident.”

JOHN: You must have had your chin and your nose damaged.

DERREN: No, I moved back, anticipating catastrophe but my eyes got burnt and bits got in them. It was not very pleasant. I was blind for two weeks.

When I could see again, Clint Eastwood sent me a Fortnum & Mason’s hamper with a bottle of Optrex eye wash in the middle.

DERREN: Yes. I did a film with Frank Sinatra – The Naked Runner. He was a lovely man.

He must have heard that this English actor didn’t take the money. And he was absolutely wonderful. So nice.

We had been going to film in Copenhagen.

He said: “Have you ever been to Copenhagen?”

Anyway, they changed it and they shot my stuff in Welwyn Garden City instead.

“You’re not going to Copenhagen?” he said. “Well go and have a holiday there on me.”

So we flew there in his private jet and, when we arrived, there was this stretch limousine and a man in a grey suit who said: “Mr Sinatra welcomes you to Copenhagen,” and he handed me a manilla envelope with a LOT of money in it. I counted it up and said to my wife: “We will never manage to spend all this in ten days.” And I have been known to spend money!

There was an amazing apartment for us with the kitchen full. We went out that night; came back at four in the morning; and in the apartment waiting for us was this young man who says: “Mr Sinatra hopes you had a lovely evening,” and he handed me another manilla envelope with – again – LOTS of money in it.

The money was not to cover us for ten days – it was PER DAY. I had money stuffed everywhere: in suitcases and…

Derren Nesbitt and Frank Sinatra in The Naked Runner

When I came back to London, I told him: “That was very very kind of you.”

He was so kind to me – he called me and invited me to the Festival Hall when he did the concert; I had to be at his table to have dinner with him at Claridges. And I met him after the show and he asked me – this little English actor – “What did you think of the show?”

Now that shows an amazing humility that you don’t associate with him.

“What did you think?” – He said that to me – a little, insignificant English actor.

“To All The Girls I’ve Loved Before.”

And he sang me the refrain and all I could think of was: Not many people have had Mr Sinatra sing the refrain of a song for them.

He was a very nice man.

Derren was promoting Tucked in London earlier this week

JOHN: Sinatra acted and sang. Have you any musical ambitions yourself?

DERREN: No. But I did once write a song for my father as a joke. My father was in music publishing and god knows what else. I never really knew him at all – and one Sunday – because he was always working – he said to me over dinner: “What do you think of this song?”

He said: “Do you think you could write something better?”

I told my brother Gary: “I’m going to write the worst song ever – as a joke.”

I wrote it in 20 minutes, rolling on the floor, and handed it to my father and thought he would laugh. But nothing. No reaction. Absolutely nothing.

Anyway, there was a young singer called Adam Faith and his first record was What Do You Want If You Don’t Want Money? It sold a million copies. My song was on the ‘B’ side. From Now Until Forever.

And you got paid the same money as the ‘A’ side.

JOHN: Was that your only brush with the music business?

DERREN: No. I started a company many years ago, in 1971, with my little brother Gary called Our Price Records.

I said to Gary: “We’ve got to start like a supermarket for records. So there was a tiny little tobacconist’s kiosk at the side of Finchley Road tube station in NW London and he was going to retire, so we bought that and I arranged how the records should be sold – which everybody has copied – and it started from there. And expanded. 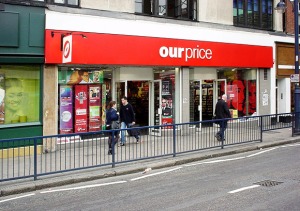 The 300th Our Price record store in Brixton, south London

JOHN: I remember shops in Oxford Street and all over.

DERREN: Yes. Eventually, we sold the business to WH Smith. They wanted to buy it and I said to my brother: “Sell it, because the days for record shops are over. Sell it.” So we sold it for £43 million in 1986 and WH Smith lost everything. Ridiculous! Why? Why?

JOHN: So what’s next now?

DERREN: I have no idea. People now seem to be asking me to do work again.

JOHN: I’m not surprised, on the basis of your performance in Tucked.

DERREN: I also run one of the biggest drama awarding bodies in the country: New Era Academy. That keeps me out of trouble. We are in Hong Kong, Sri Lanka, France… and Spain is coming now.

… I CHAT WITH THE DIRECTOR OF “TUCKED” HERE …